21 Years On From Steven Gerrard’s Introduction: Is There More To Come? 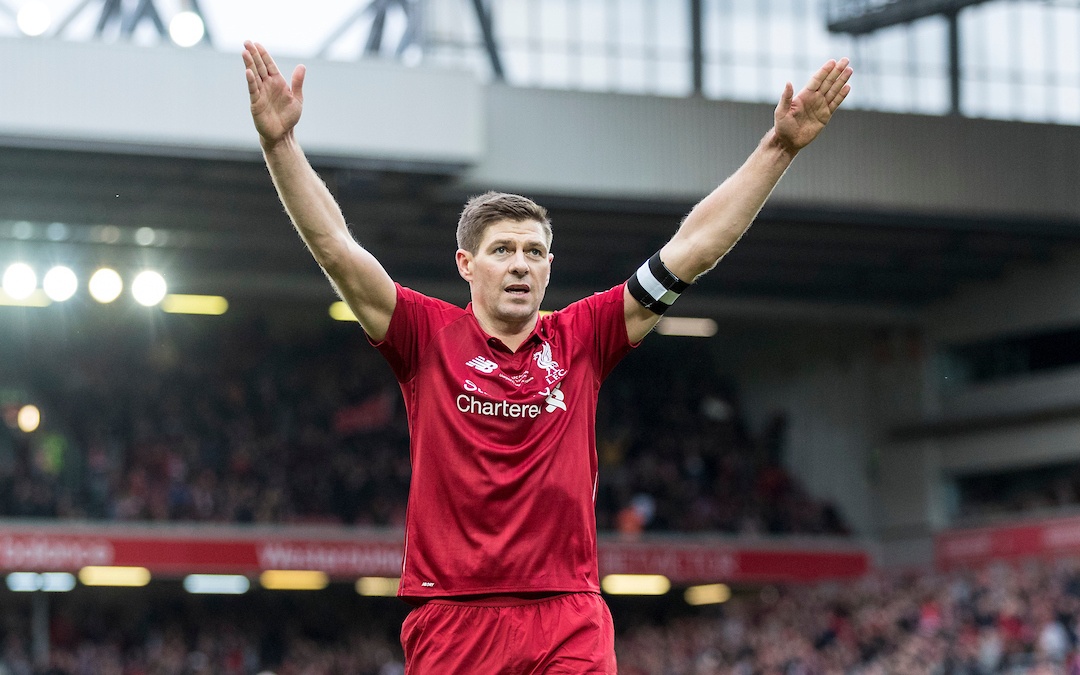 TO the uneducated eye it was just another late substitution to see out time.

Gerard Houllier’s Liverpool were cruising to a 2-0 victory over Blackburn Rovers at Anfield, with Tony Parkes’ side firmly lodged at the bottom of the league having won only two of their 14 fixtures in the Premier League.

And first-half goals from Paul Ince and Michael Owen had already made sure it would stay that way. The game was won.

Some of the 41,753 Anfield crowd had begun to filter away as the substitute board went up in the 90th minute.

When it showed the number 28 some wondered just who would be replacing Vegard Heggem. The player’s number and name wasn’t even listed on the back of the match programme.

Many, though, did know on that day, 21 years ago today. With a look and a swagger that was unmistakably Scouse, this was Steven Gerrard starting out on a journey he had been tipped to make for a long time.

From playing on the Bluebell Estate and for his school in Huyton, through to turning out for Whiston Juniors and his early years at Liverpool, talk of this shy-looking lad nervously tucking his top into his shorts making it to the very top had been going for years before.

And now here he was, turning out at right back for Liverpool, living the dream.

For those that were there, that witnessed it and watched him develop from that teenage talent to one of the best in the world, there is a Gerrard highlights reel that will likely always play inside.

From that first goal for the club in the game against Sheffield Wednesday to a list of magic moments straight out of football’s fairytales.

Scoring in a European Cup final. Lifting Old Big Ears as captain. Rescuing a lost cause of an FA Cup final in the most jaw-dropping of ways. Cupping his ear and pulling tongues at Goodison Park. Kissing the camera at Old Trafford and scoring that goal against The Mancs at Anfield. On it goes.

There are many, many more such moments across a career that spanned 17 years and saw that lad who looked just like one of us clock up 710 games and lift seven trophies for Liverpool.

Three times he scored more than 20 goals in a season. Ten times he was into double figures. And it was all types of goals, the blockbusters, the freekicks, the headers, arriving late into the box, curling one into the top corner, volleys, penalties, take your pick.

He threw the odd tackle in now and again as well.

It’s four and a half years since Gerrard waved goodbye to Liverpool as a player, sadly bowing out in a shitshow of a finale at Stoke City.

But he will always be remembered fondly in this city. Third on the list of most appearances behind only Jamie Carragher and Ian Callaghan, he lived it like one of us. We saw the passion, what it meant, how it chewed him up and spat him out at times. He poured everything into it and in the end he had nothing left.

Who can forget the interview in his final season when his emotions were raw, his voice was wavering and the tears were welling up? When he told Claire Rourke not to read out some of the tributes that had been paid to him because it would “break” him.

He was never a man you could say was just picking up his wages. He was never one of those footballers who you wondered whether he was just in it because he was good at it. It meant everything to him.

In that interview from 2015, Gerrard says it’s “hopefully more of a see you soon rather than goodbye”. After America, he of course returned as a coach at The Academy before landing the top job at Rangers. Could he one day be back as Liverpool manager? It’s a question that many have been asking and plenty have been discussing.

Given his attachment to the club, his love of it, his history there, there’s little doubt it’s a job Gerrard has his eyes on. Wouldn’t you if you were him? Jürgen Klopp’s contract with Liverpool is up in 2022 and some of his comments suggest he will consider taking a break from football at the end of it.

Is that the chance for a new chapter of Steven Gerrard’s Liverpool story to be written? Success with Rangers would certainly help. And right now they are neck and neck with Celtic at the top of the Scottish Premiership.

Some will argue Pep Lijnders is in a stronger position right now. But after his short-lived experience of management in a four-month spell at NEC, does he want to be the number one?

He’ll know everything of the pressure the position brings having been at the side of both Klopp and Brendan Rodgers. Perhaps he’d be better suited to continue in the right-hand man role.

Debate over Gerrard’s suitability will go on, and will no doubt intensify as Klopp’s contract ticks down. We know he’s a leader, we know his passion for Liverpool burns as strong as ever. So does everyone else, including those who write the stories and compose the headlines.

Right now, it’s a question for another day. Instead, a day like today, which sparks a memory from the opposite end of Gerrard’s career, is a time to remember those good times.

When a local lad pulled on the shirt, fought the battles, scored the goals, inspired and entertained, and lifted the big one in the unlikeliest of circumstances.

Whatever happens next, Gerrard will always be a Liverpool legend. And who knows? There could be more to come.

“As a fan growing up, watching the team on the Kop, to actually run out onto the pitch and represent Liverpool was a dream come true.” ♥️

21 years ago today, an 18-year-old lad from Huyton made his debut at Anfield

The rest is history 👏 pic.twitter.com/M8S4DJ0X7K