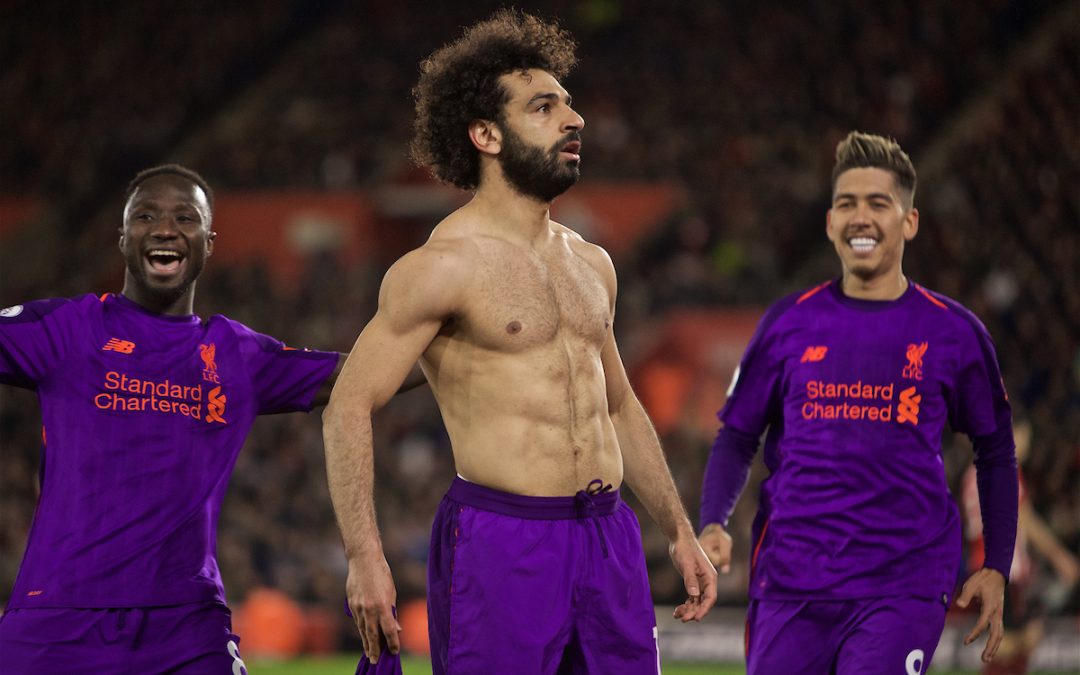 It had been horrendous. It was watch through your fingers stuff, the worst things could possibly be.

Southampton got to the half hour only one up and Liverpool were flattered by that. There was no ball they weren’t second to, no danger they failed to anticipate, no easy pass spurned. It was, frankly, a shitshow. Southampton deserved credit. They played entirely in the half spaces, turned Liverpool’s powers against them, asked questions few sides outside of the top six have managed to ask. They pinned Liverpool against the wall and Liverpool looked helpless, weak as a kitten and twice as naive.

Liverpool drove us all to distraction, no decision right, unable to build pressure. And then they stretched Southampton back and forth across their own box and Naby Keita did brilliantly and time stopped and it was, after what felt like an age from 100 yards away, a Liverpool goal. A Liverpool equaliser. To say it was scarcely deserved is a monumental understatement. Liverpool have never been genuinely lucky this season; they have rode their luck, they have fought to the end, they have shown fitness and sharpness and desire, but they have rarely not deserved to some extent what they have had during games.

The only thing Liverpool deserved at 1-0 was to go 2-0 down.

The midfield was atrocious, Trent was having a nightmare, Matip was uncertain at best and calamitous at worst and Mo Salah just couldn’t get near the ball. We end the game legitimately concerned about Gini Wijnaldum. There have been too many games now with not enough influence; a midfielder who gave everything, who was our best until February may well now have been our poorest through March and April. We saw footballers flop physically today; they mostly wore the red and white stripes of Southampton, we can see how things can go wrong when legs go. But for Gini now it was been too much of a battle for too long.

Naby Keita scored and wanted the ball. Fabinho has credit in the bank. But the truth of the matter is that these three points are driven back to Liverpool in the boots of Jurgen Klopp, James Milner and Jordan Henderson. Liverpool’s grown ups got on the pitch and played like two men who have a league to win. They were immense performances. Game changing. Suddenly the pitch belonged to Liverpool. Milner made it huge, Henderson covered every blade of grass; pent up having watched things slip away before his eyes.

God the scorers of the second and third deserved that. Henderson’s goal belongs to his manager and to Milner but also to his own bravura leadership; Salah’s to his own belief and perseverance. He has needed this for so long. We needed him there and then. He delivered.

They were and are our heroes. There was a patch when they were villains, when they were inexplicably throwing so much of their own good work away. And then the opposite happened. They deserve all of our acclaim. I want this not to stop. I’ll remember this end, I’ll remember how much it wanted, craved Liverpool winning the game. We needed more than wanted; Henderson wants for all time.

Every song I write’s about you.

The Reds have the hand of history on their shoulders. It still may not happen. But they give us this. Like they have given us similar so many times this season.