No Luck, No Cheating – Salah Is Simply Superb 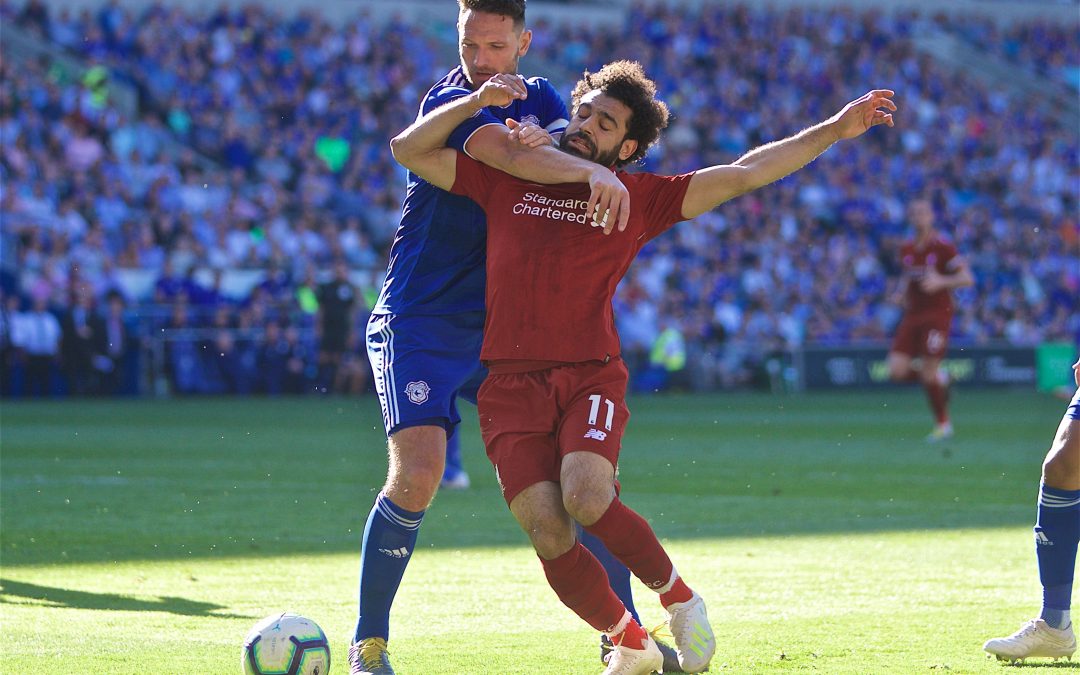 FEW things are certain in life. Only death, taxes, and people calling a Liverpool player a cheat if they are awarded a penalty.

Mo Salah’s so-called “dive” at Cardiff on Sunday had many rival fans and media pundits fuming, bizarrely, even though they also mostly conceded that Sean Morrison had in fact fouled the Egyptian.

Agonisingly, I had to listen to part of the second half of Cardiff v Liverpool on the radio like some sort of caveman, and when the penalty was awarded, the first thing the commentator said was that it was “soft”. Chris Sutton – of all people – had to correct him and point out that Morrison was doing his best impression of a rucksack. The commentator then admitted that it was “probably” a penalty, but couldn’t resist punctuating it with “he went down very easily though”.

When I eventually saw the incident, I assumed there was something wrong with my television because it certainly wasn’t the same one that was described to me at the time.

It was also the second week in a row on Match of the Day that the pundits laid in to Salah. Last week, Danny Murphy acknowledged that David Luiz had kicked Salah in Liverpool’s win over Chelsea, but that the former Blue apparently didn’t fall down properly. This week, it was Jermaine Jenas’ turn, and though he went as far as saying that it was a definite penalty, he still couldn’t resist adding, “we all know what Salah is like.”

Yes Jermaine, we all know what Salah is like. He’s sensational is what he’s like. He’s fast, he’s skillful, he’s a world class goalscorer and gives defenders a torrid time for 90 minutes every time he plays, which is why they have to resort to fouling him time and again in the box and hoping they get away with it.

That’s not to say that he doesn’t decide to go to ground on occasion. He absolutely does, and he is also entirely justified in doing so.

Most of his detractors know this full well, but the reason he started to fall over more often this season is that he spent his first year at Liverpool being grabbed, kicked, pushed, pulled and generally stopped illegally, and getting nothing for it. Only once in the Premier League in 2017/18 was he given a penalty for a foul on him. Funnily enough, the only other time domestically was in the FA Cup defeat to West Brom when VAR was used.

If anything, Salah was too naive last season. His only interest was running through defenders and scoring goals, which he did rather a lot. He regularly rode challenges, pushed off aggressive defenders and put up the with the rough treatment because all he cared about was putting the ball in the net. He almost always stayed on his feet despite being fouled, and as far as the referees were concerned, if he didn’t go down, it wasn’t a foul. As defenders began to cotton on to the fact that they were being allowed to foul him with no recourse, Salah had to react himself, and so down he started to go.

Despite the hysterics from rival fans that Salah is getting penalties left, right and centre when he shouldn’t be, most of us who have seen every Reds game this season would argue that, if anything, he has not been awarded enough. Of the penalties he has won this season, you could only really make an argument that the one against Newcastle was probably not a foul. Every other one has been quite simply, a blatant foul, whether or not you think the fall was overly dramatic.

Quite possibly the stupidest thing I’ve seen said about the incident in Cardiff on Sunday was that it was both “a dive AND a foul”. That, I’m afraid, is cock of the poppiest variety. A dive is a dive. Simulation to con the referee into thinking you’ve been fouled when you haven’t been. If you have been fouled, as Salah undoubtedly was, then it simply is not a dive. It cannot be both. It’s not Schrodinger’s fucking penalty.

Neil Warnock’s comments after the game were actually softer than I thought they would be considering he usually claims a league-wide conspiracy against his club every time the opposition is correctly awarded a throw-in. However, it needs to be pointed out that comparing a dive in football to a dive in the actual sport of diving has never been funny. Seriously, can we all agree to knock that absolute ‘Yer Da’ shit on the head please?

Possibly the maddest thing about all of this is that what Salah is being accused of happens in every game, all of the time, by near enough every player.

Even Burnley were throwing themselves to the ground at every opportunity in last night’s 2-2 draw with Chelsea. It wasn’t in the penalty area so attention wasn’t paid to it. A slight nudge, fall over dramatically, get a free-kick, bit of a moan from the home fans but essentially, no-one cares and gets on with things like adults.

It is not just at the top level either. I took in some League Two football on Easter Monday. Crawley Town v Notts County wasn’t exactly the enthralling encounter you might assume it would be, but it was filled with players throwing themselves to the floor from the slightest contact. As with the Salah incident, they were all probably fouls, but the flailing arms and sudden collapsing of the legs were added to make sure the ref did something about it. It happens at all levels in all games, and yet significant chunks of the media are trying to insinuate that Salah is the worst perpetrator. 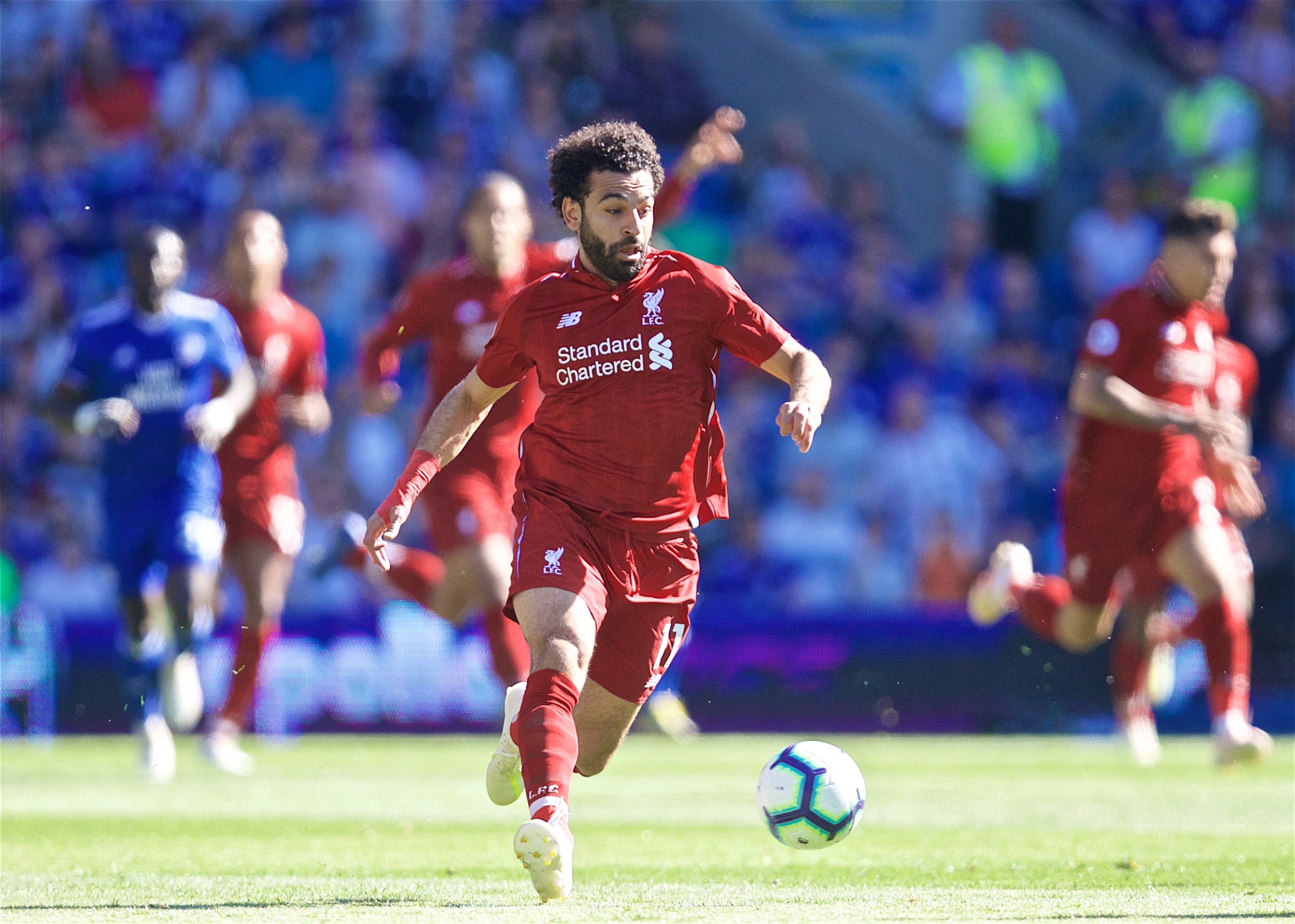 It’s so easy for a commentator or pundit to throw the odd “we know what he’s like” or “he knows what he’s doing” in there, and just let it become implicit knowledge to those unable or unwilling to formulate their own opinion. I’d say that Gary Neville was in fact the one who “knew what he was doing” with his calculated comment on Sky Sports after the penalty incident. I know because it’s exactly the sort of thing I’d have said if anyone was ever stupid enough to let me commentate on a Manchester United game.

It’s not just at Liverpool this happens of course. Remember when the media were giving Raheem Sterling the same treatment? There were some occasions where the former Red would go down too easily, but there were far more where he was genuinely fouled and we would still get comments like “Hmm, well, I suppose it’s a foul, but does he have to fall over like that?”

Now that there’s been this almost overnight media turnaround on Sterling (rightly, by the way, as he is a sensational player), the bloodthirsty media need another footballer to feed on, and they appear to have chosen Mo.

I certainly don’t think there’s anything racially motivated in the attacks on Salah’s character, but you can’t help but feel that it seems incredibly irresponsible for the media to go out of its way to try and paint him as such a villain mere days after he has been the subject of very public racial abuse by a group of rival fans.

With the introduction of VAR in the Premier League next season, if people are correct about Salah then, in theory, he should get fewer penalties and they’ll have nothing more to vent their impotent rage at. However, I will bet anyone a significant chunk of money that Salah will actually get far more than he currently does. Either that or he’ll take advantage of defenders knowing they can’t get away with grabbing him anymore.

The message to defenders is this. If you don’t want Mo Salah to fall over, then don’t foul him.

In the meantime, Salah and his teammates will pay no attention to the noise.

The only thing that’s been “9.9” about Liverpool this season has been their performance levels.