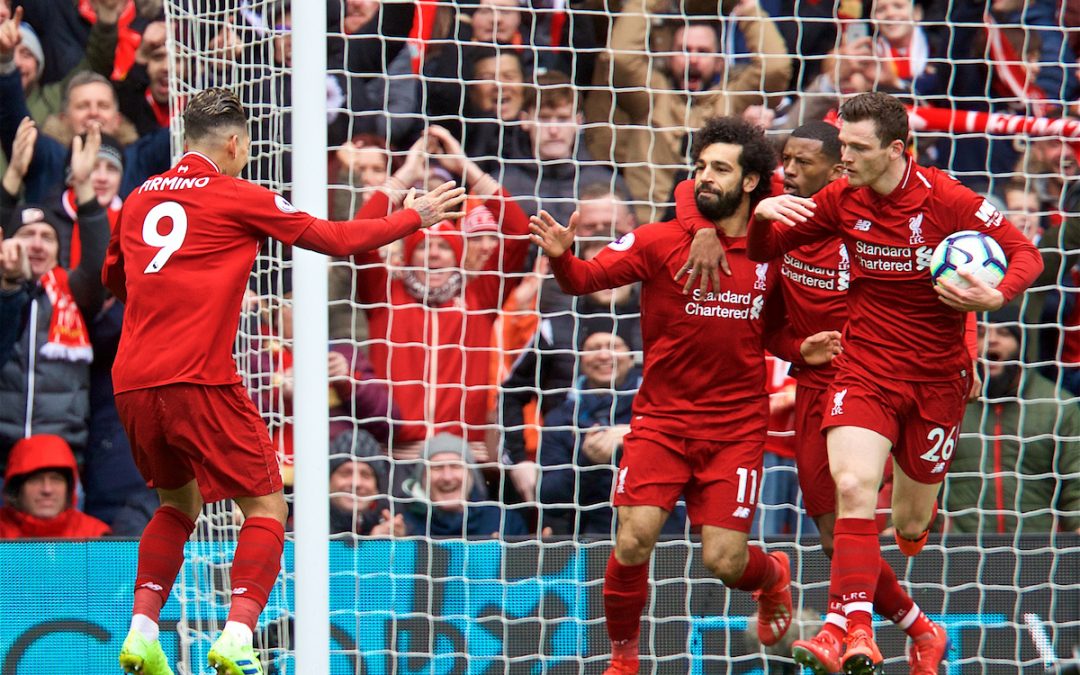 LIVERPOOL go 0-1 down in the wind and the hail and you wonder if they are going to break.

It’s cycling up a mountain, a Tour de France stage with yellow jerseys and polkadot tops, loons running alongside the bikes. Cycling up a mountain and teeth are gritted, and then three weeks ago Tottenham faced Burnley and they broke. Left pedalling squares ever since. Not about bottle but about pace and not being able to handle it.

Liverpool go 0-1 down and you wonder if they will be pedalling squares for at least 85 minutes, headbanging in the face of Burnley and their elbows and the wind and the hail.

For the five minutes immediately prior to the equaliser I was staring into the abyss for the first time since October, let me tell you the abyss is deep. The weather pounded the Kemlyn, the stand itself moaned and groaned, grinding deep, the pathetic fallacy killing me, the prospect deep and hollow.

We are all allowed to wonder, to wobble, why wouldn’t you wonder? But, unlike last weekend, Liverpool themselves had other ideas, a mountain to climb not an abyss to fall into. Other ideas are all I can ever ask when my own turn as gangster as the weather.

Jürgen Klopp had other ideas and god bless him. The selection of Adam Lallana would always be controversial under the circumstances, but the other ideas came through him — a vertical press forcing Burnley into chaos at times, forcing Liverpool onto the front foot, forcing the issue.

Lallana’s slight frame and tender touch belies a smart aggression that, when fully fit, the Burnleys of this world struggle to live with. The equaliser and the second come from smart work leading to brilliant front-three quality. Mo Salah tortures a full back before throwing Tom Heaton into disarray. Sadio Mane’s finish sharper, sweeter and fruitier than lemon meringue pie.

Roberto Firmino grew into the game to the point he began to run it. He ends up with a brace which rewarded the number nine side of his game, two tap ins, two triumphs for gambling; the other side of his game was pristine.

He loved the chaos — chaos of the conditions, chaos of Burnley, chaos of cycling the mountain. The game became one of his. That happening is among the best things in football.

The goal that opened the abyss, that made you wonder about breaking was a foul on Liverpool’s keeper but he responded brilliantly. He claims three or four very well indeed, commands and is certain with the ball at his feet. At some point the Anfield crowd will need to appreciate that he is going to play football.

What Liverpool do well through the game is keep playing, they manage it even at 3-2. They were a side confident in their football, backs never against the wall — as shown by Daniel Sturridge spraying it beautifully into space for Sadio Mane to keep his cool.

There is something so satisfying about that fourth, that “fuck off” of a goal. Liverpool will not be pedalling squares today. For the challenge to come, scoring four is the way forward. No, Salah doesn’t get his goal but apart from that it couldn’t be better. Liverpool have shaken off adversity marvellously and walk on through the wind and the hail.

The pace remains remarkable. This is the first title race since 2013-14 to be going into April and the demands are to break 90 minimum. It’s one hell of a mountain Liverpool are climbing but you listen to me, they are climbing it, they have gritted their teeth, they have other ideas. They will do for me.

“I couldn’t be arsed being a full-back playing against Sadio Mane.

🗣 Subscribe for all of our reaction as Liverpool stay within a point of the top of the League 👉 https://t.co/XZAK9veWt7 pic.twitter.com/rpJqSqcs54