Liverpool’s Patient Approach Another Sign Of Their Title Credentials 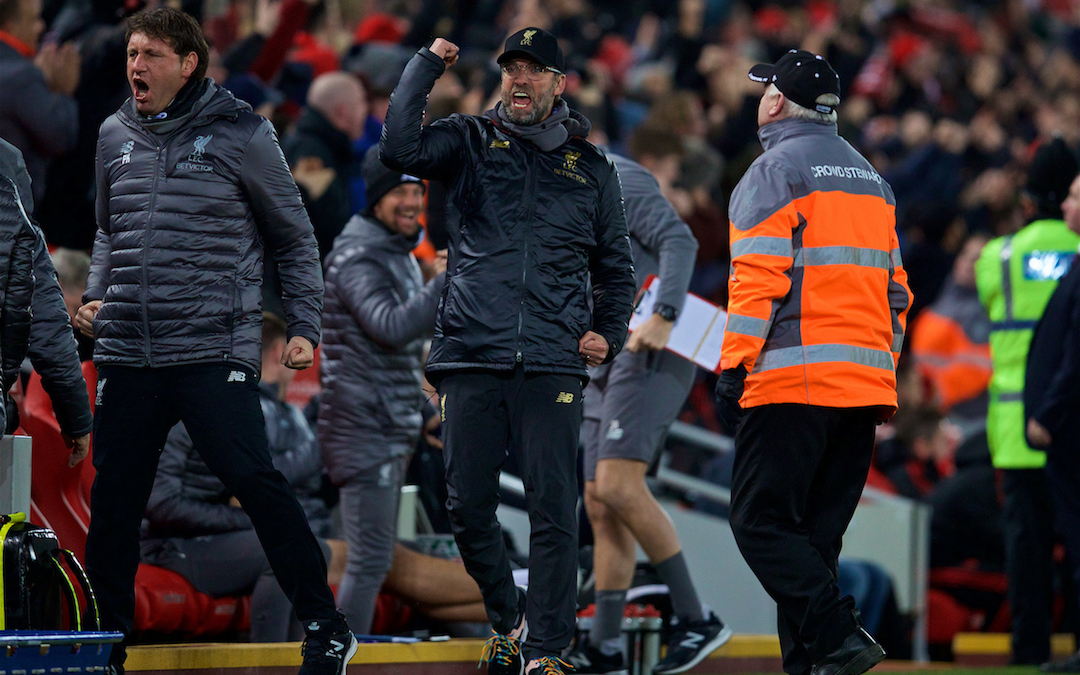 JAMIE Carragher made a point about patience during yesterday’s game.

Around the hour mark, when The Reds were taking wild shots from all over the pitch, Carragher rightly pointed out that there was no need to panic and that, if the players kept their heads and stayed patient, we’d make the breakthrough.

It seemed that we’d momentarily lost our cool and the crowd was getting slightly tetchy. Despite the gulf in quality between the two teams throughout the game, you could be forgiven for feeling as though it might not be our day.

Lo and behold, little over 10 minutes later, Xherdan Shaqiri put Liverpool back in front and followed it up with a third soon after. The timing of these goals got me thinking, how many times have Liverpool scored vital late goals this season? How many times have they been patient and ground out results, even when things aren’t quite going their way?

Of the 37 goals The Reds have scored in the Premier League this season, nearly half (18) have come after the 60th minute. These 18 goals have been scored across 10 separate games, only four of which we were winning before the 60th minute (West Ham, Crystal Palace, Cardiff and Bournemouth).

These stats suggest that we’re no longer having to play 100 mile-an-hour football and establish an early lead to win games. We have an abundance of energy in reserve for the final third of matches if we’re up against it.

As Mourinho said in his post-match press conference after yesterday’s game: “I am tired from just looking at Robertson”. The fitness levels Jürgen Klopp has instilled in his players since he’s been at the club are well and truly paying dividends, with The Reds simply wearing teams down on numerous occasions.

Another thing these stats tell us is that the mental side of Liverpool’s game has improved dramatically over the past few seasons. In previous years, when they’ve been drawing against Manchester United at home heading into the latter stages, they’ve panicked, the crowd has got edgy, and we’ve not come away with three points. In some cases, we’ve ended up losing the game. However, faced with the same situation again yesterday, the players didn’t panic, they bided their time and got their just rewards.

The third thing you can attribute these stats to is the strength of The Reds’ squad, and Klopp’s match-changing substitutions. Daniel Sturridge comes on at Chelsea and scores an absolute worldie with a minute to go, to rescue a potentially priceless point. Divock Origi comes on against Everton and we all know what happens there. He’s able to leave Bobby Firmino on the bench against Burnley and when he comes on, he scores with his first touch to swing the game in our favour. Shaqiri comes on and bags two against United.

You get the idea. Having such a strong squad means Liverpool have got game changers far beyond the first 11, a luxury we’ve rarely (if ever) seen in the Premier League era.

These factors all considered – whatever shortcomings past teams and squads may have had, the Liverpool of this season is a totally different animal. There’s a real belief among both players and supporters that, even if we’re not ahead on 60, these lads will still find a way to win the game.

The obvious reference points are Everton and United, but the hard-fought victories achieved against Watford and Burnley away could prove just as pivotal come the end of the campaign. These were games where Liverpool didn’t score as early as they would have liked and where the players needed to keep their heads, as Carragher alluded to, in order to get over the line.

Winning patiently is the hallmark of any Premier League champion. The United side under Alex Ferguson consistently won games with a patient approach, as did Chelsea, as did Arsenal, as did City – and Liverpool are doing just that, at the moment.