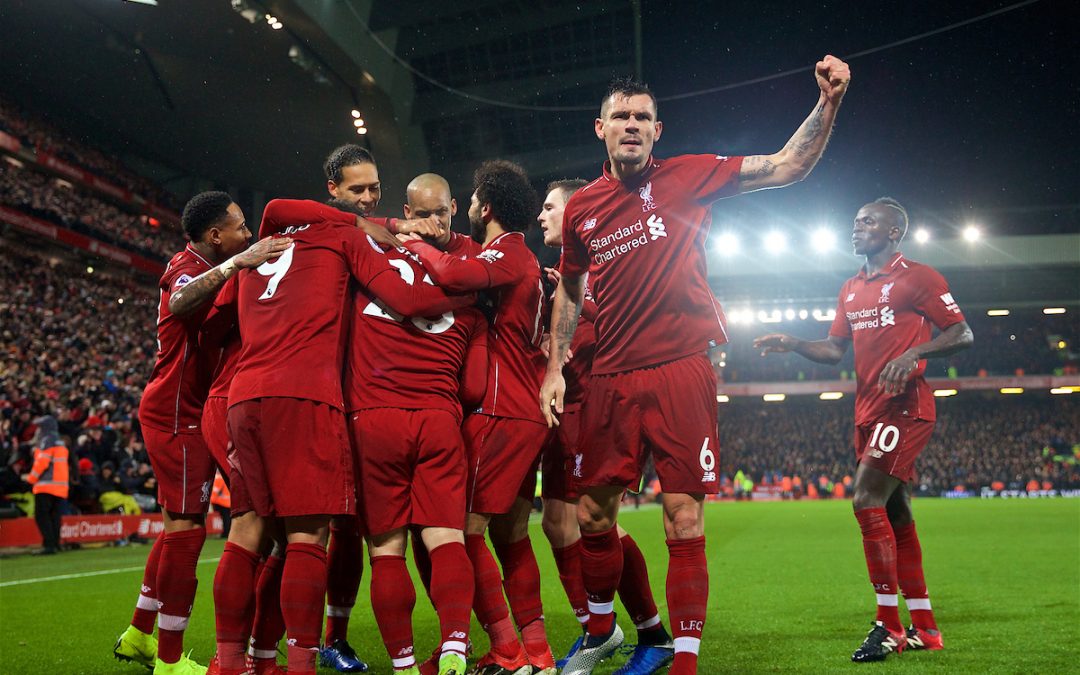 IT was almost mundane. It was simultaneously magic. Manchester United tragic.

The form book didn’t go out of the window. It rarely does. Since Rafa Benitez arrived at Anfield, broadly speaking, Liverpool have got the results they should, given the seasons they are on compared to that of Everton and Manchester United, and this season Liverpool have done that at Anfield in back-to-back home games.

The win against United was in part forged against Everton. The victory against Everton has settled The Reds into the moment. It has given them the fillip they needed. Since then it has been nothing but league wins, strong performances and last 16 qualification in Europe. But it has been assurance.

And Liverpool were assured against Manchester United, they were as certain of victory as it is reasonable to be. In fact, complacency was more likely to undermine them than anything Jose Mourinho or his players could do. Liverpool would find a way. Liverpool dismissed their opponents. It was almost mundane.

There was dominance everywhere, there wasn’t a Liverpool player who didn’t win their battle. Nathaniel Clyne was theoretically the weakest link, but he didn’t play like it. The only question mark wasn’t his quality but his energy. It is one hell of an ask off so little match fitness.

Andy Robertson on the other side was the opposite. His energy is incredible and his certainty when Alisson played out to him was repeatedly brilliant. He starts the move that leads to the second goal taking the ball under insane pressure before arrowing a diagonal into the midfield.

Fabinho had a whale of a time. He was in his pomp, enjoying space and picking his time to win his battles. His selection part of the manager doing his business well.

He picked a side which was very fluid and started Sadio Mane from the right with Mo Salah through the middle. But the best first-half performance in attack was Roberto Firmino who similarly had a whale of a time. What was difficult in general for The Reds a few weeks back suddenly looks a joy.

Jürgen Klopp brings on a sub and that player scores two. When that happens a manager will be acclaimed but the player himself deserves massive credit. Xherdan Shaqiri finds his spaces like a man watching on from the sidelines and visualising how he helps the side win. He picks his moments brilliantly and shows all the time. His shots, while deflected, were sensible and it is his sense which has surprised far more than anything else — dancing on the light-up floor.

Liverpool had 36 shots. It is an astonishing fact and, while it is arguably 10 too many (hiya, Dejan), it shows just how dominant they were. How easy it was. It shows they battered Manchester United ’til kingdom come. They are coming to the boil as the decorations go up. They are aiming to be top of the pops while we hit the turkey. Seasons have seasons, have rhythms, seasons wax and wane, and right now this feels like the time of Jürgen Klopp’s mighty boys in red. Hang onto our coattails if you can.

The new normal being seeing off Manchester United mundanely is sound, long may it continue. But the new normal in terms of what Liverpool are doing to the football league cannot be dismissed as easily. Liverpool have now played 17, won 14 and drawn three. This is simply incredible. It isn’t championship form; it is beyond championship form, while simultaneously there are no guaranteed championships.

For now we bask. Top of the league, the ultimate form book. Seventeen hurdles down, 21 to go. Liverpool’s dismissal of Manchester United in our back pocket.

It’s fabulous. And it is also just one of them.