Fabinho Finding His Feet At The Heart Of Liverpool’s Midfield 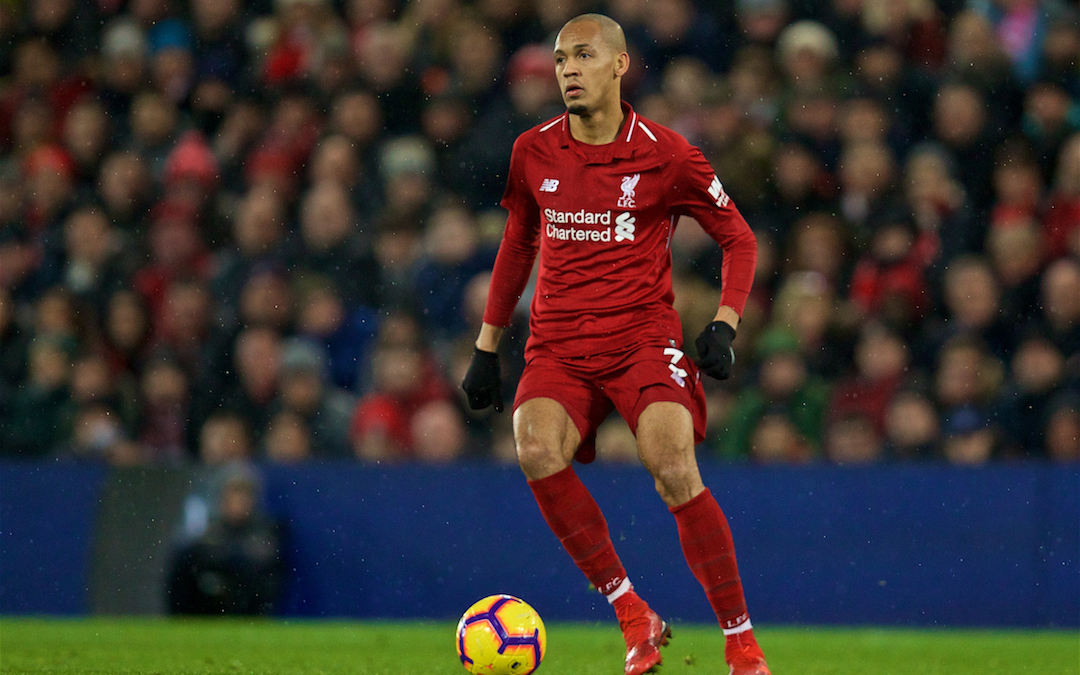 BEFORE 4pm on Sunday, doubts still lingered about one of Liverpool’s Brazilian trio.

Roberto Firmino has been integral to The Reds’ high intensity playing style under Jürgen Klopp. Alisson Becker has earned widespread recognition for his contribution to Liverpool’s increased defensive solidity this campaign. Fabinho, however, has received criticism for looking off the pace at times while only playing a bit-part role.

Come Sunday evening, those doubts had evaporated into the biting mid-December air. Fabinho ran the midfield against Manchester United, turning in an eye-catching man of the match performance that Klopp labelled “absolutely outstanding”.

When Liverpool signed Fabinho for £39million in July, supporters had an idea of what we were getting. Starring for Monaco over the past three seasons, he caught the eye in a defensive-midfield role as Les Monégasques reached the 2016-17 Champions League semi final.

In the clearout from the Principality that followed, Fabinho was heavily linked with many European clubs, including none other than Manchester United. That’s what made this performance so sweet.

We knew he was defensively astute, capable of sniffing out danger, making tackles and breaking up play. Indeed, those qualities were showcased at Anfield on Sunday as the 25-year-old recovered the ball effectively time and again with those long, spindly legs.

What really stood out about this performance, though, was the ex-Real Madrid man’s creativity and assurance in possession. Having been selected ahead of captain Jordan Henderson, we were treated to an impressive array of passing from Fabinho.

The best example of his vision was the clipped assist for Sadio Mane’s opener. From 83 touches, he made 66 passes — a figure surpassed only by Firmino (70) and Georginio Wijnaldum (79).

Henderson is often criticised for turning back when there is no clear pass available. That’s where Fabinho offers an upgrade from the skipper, demonstrating his willingness and ability to progress with the ball at his feet. He displayed neat footwork to evade the opposition when needed, and completed all three of his attempted attacking take-ons.

The agility Fabinho showed while dribbling through United’s muddled midfield belies his 6ft 2in frame. It isn’t entirely surprising though, considering that he was initially deployed at right back for Monaco in 2014-15, as well as more recently this year for the Seleção.

That experience at full back helps him in one-on-one situations but also provides him with the confidence we saw on Sunday to play forward and carry the ball into the opposition half.

Blurring the lines between full back and defensive midfield has become a popular recent trend in Europe. Most notably, Philipp Lahm made the switch under Pep Guardiola at Bayern Munich, something that has since been tried with David Alaba and Joshua Kimmich.

The grounding of playing full back can give these players more awareness and confidence on the ball than those that have been groomed as traditional midfield “destroyers”.  This seems to be evident in Fabinho too. He managed to fire off five of Liverpool’s remarkable 36 shots, with two of those on target, showing a side of game we’d only heard about from his Monaco days without seeing it for ourselves.

The first, from just outside the box in the first half, had David de Gea scampering as it went narrowly wide of the post. The other was a fierce 30-yard drive in the second half straight at the United ‘keeper. Not something to go to town over, but it was a small part of an all-action performance from the Brazilian, nevertheless. 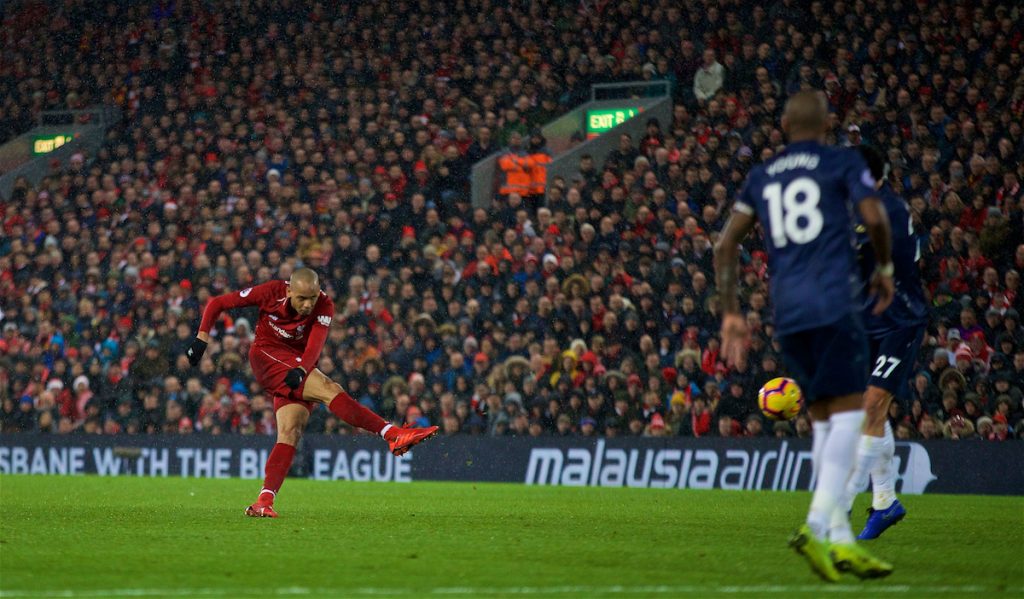 It was always appreciated that Klopp was going to take a while to bed the new recruit into his system. Many comparisons had been drawn to the way that Alex Oxlade-Chamberlain eased into the starting lineup last season. Even still, there was a creeping feeling that we should have seen more quality from Fabinho.

We did see some of that class against Red Star Belgrade in the Champions League, but the calibre of the opposition did leave something to be desired. His unconvincing display in his first major test, away at Arsenal in November, did little to appease those who had doubts about the player.

However, after Sunday’s performance, it looks as if that showing at The Emirates was not representative of his true ability. It feels like Fabinho has now fully arrived in this Liverpool side.

At the beginning of the season, there were suggestions that it might be the midfield that is the department lacking in quality. Yet against United, the trio in midfield were among the most impressive facets of the side. Wijnaldum was imperious, while Naby Keita’s movement showed promising signs.

This potentially seminal performance from Fabinho should give Keita encouragement that a similarly masterful showing of his own could be just around the corner.

As Liverpool’s title tilt continues to gather momentum, the balance to this side is more resounding than ever now that Fabinho’s rangy stride has adjusted to the pace of the English game.

“I think this is the midfield Klopp is working towards. The balance looks really good with Fabinho, Wijnaldum and Keita…”