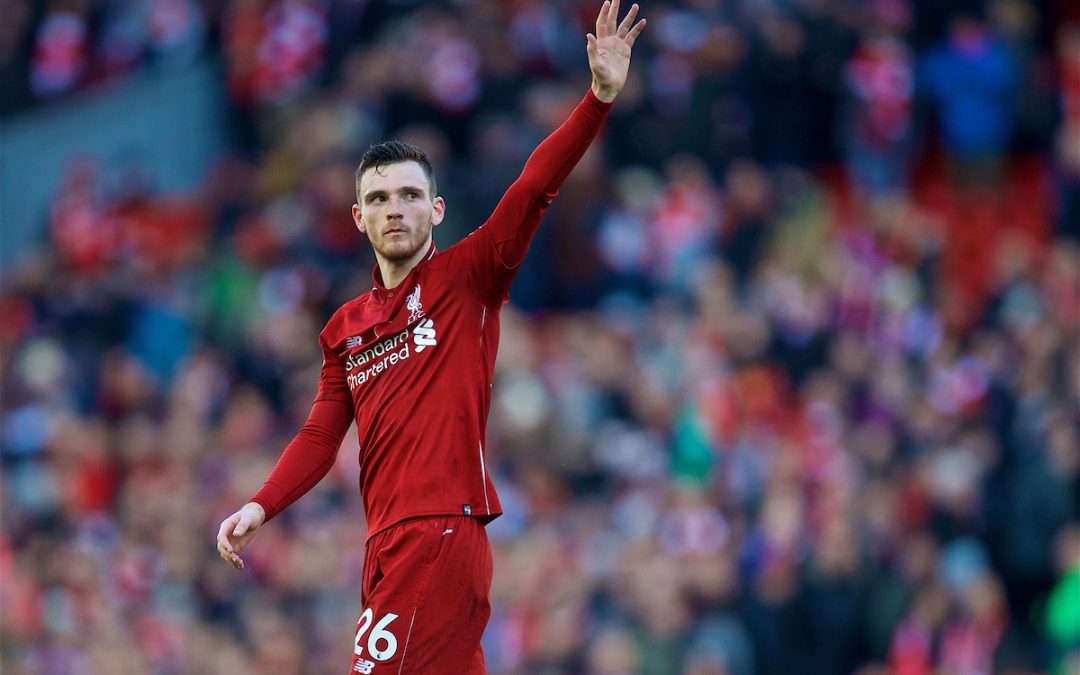 What a performance from the Liverpool left back, one man who is the very best of us.

He does this thing second half when Liverpool are 2-0 up, when he is firmly man of the match, when he has set up Xherdan Shaqiri for his second, when there is nothing left to prove whatsoever: Fabinho overhits a pass into his path. Robertson could watch it go. Could leave it. But he kills himself to keep it in and turns it into a Liverpool throw. Fabinho apologises afterwards but he shouldn’t — at its best, this is what this Liverpool team does — dig each other out, work for each other.

In the run up to the second, Robertson sends a pass 60 yards to Trent Alexander-Arnold from a tight position. Minutes later he whips in for Shaqiri. Minutes later he should score, eliciting a smart save from Sergio Rico. It wasn’t simply an all-action performance, it was an all-round performance. The running matters but the decision making matters more. His was impeccable.

Robertson epitomises the graft and the brains that underpin this team. Today, in the second half especially, it was graft and brains that was on show from this team. Liverpool controlled the tempo and forced their game onto Fulham far better than they did against Huddersfield, Cardiff and Red Star. They were relentless in pursuit of the second and then probed constantly for the third, which never came but that didn’t matter. It was there in theory, in principle.

The opener showed brilliant presence of mind. From Virgil van Dijk telling Alisson, him springing Trent, Trent weighting his through ball like Michael Laudrup in his pomp and then Mo Salah being the quickest but also the coolest. Salah was low key terrific. He wants so much responsibility, if anything he is too eager to be a grown up but then he sucks you in and lays the most impudent backheel to James Milner. I live for the mischief.

The finish for the second may go under the radar. It was brilliant from Shaqiri and deserved. He was prepared to lose the ball in both halves of the match when too many were conservative in the first 45 minutes. The manager wants them to be more direct and there are ways to do that — carrying the ball and probing. These are the ways and Shaqiri carried them out well. Try not to give them goalkicks — better to lose it 20 yards out and give them the problem of possession.

Though Fulham are a funny side who don’t quite see possession as a problem but can’t quite take it as an opportunity. Alexander Mitrovic does well throughout, though he should score. Ryan Sessegnon is good too. But they truly are a side who need to click.

Liverpool have their questions, Sadio Mane and Roberto Firmino are both present in games but not quite influential enough, Gini Wijnaldum has had his performance eroded by the demands, Fabinho looks good with the game right in front of him, but around and beyond and behind looked tough as it so often does for a Liverpool midfielder.

But Liverpool won to go top. They won to be played 12, won nine, drawn three. They won well to set the bar for the day.

We all need to be a bit Andy Robertson. Let’s channel him.