How Xherdan Shaqiri Can Continue To Silence The Critics At Liverpool 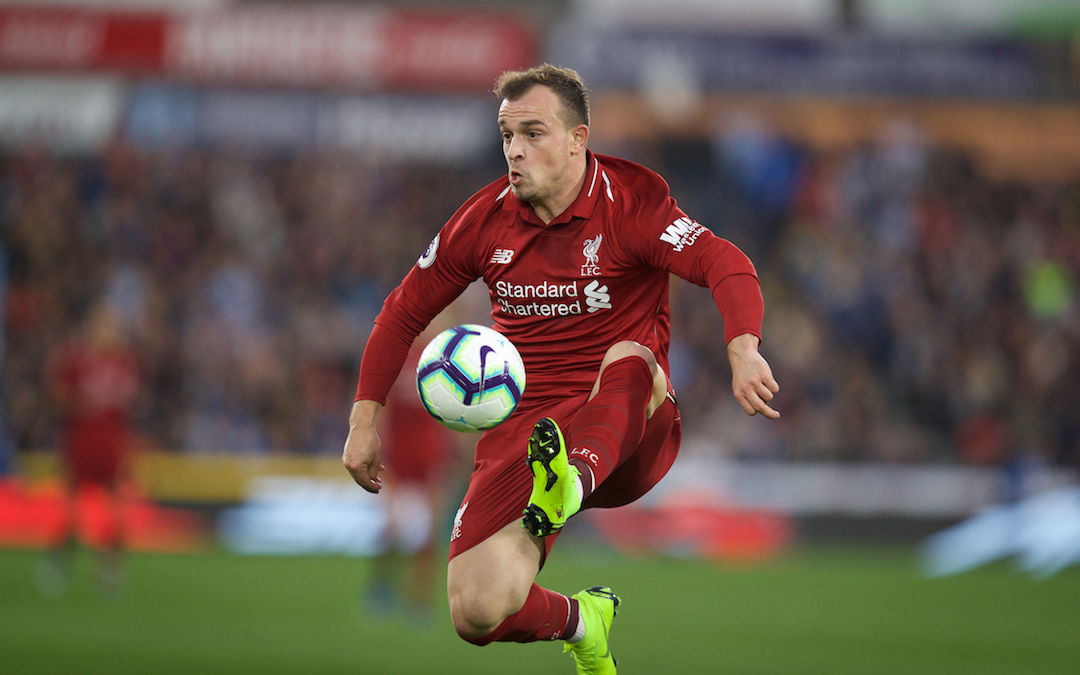 IT’S been an interesting start to Xherdan Shaqiri’s Liverpool career.

In one way, low key. In another, full of incident.

He missed half of pre season due to his World Cup exploits, and then scored an amazing acrobatic goal in a 4-1 win against Manchester United in front of over 100,000 people. Which was a decent way to start.

He then only features in half of Liverpool’s first six games, all as a substitute, before finally getting a start against Southampton. In which he has a massive hand in two of the three goals, his shot being deflected in for the first, his wonderful freekick hitting the bar before being bundled in for the third. And then gets rewarded by being hooked at half time.

He starts again in the League Cup a few days later and plays pretty well, but Liverpool lose for the first time that season. He then comes off the bench against Chelsea in the league at Stamford Bridge and misses a sitter, before seeing the fella who came on after him score a screamer. Then he’s not used at all against Napoli and Manchester City, despite Liverpool not really looking like scoring or creating much either.

So it was probably nice for him to play 90 minutes in a relatively low key win at the weekend. He was pretty involved too. He gets the assist of course, but he’s generally busy from an attacking sense. He created two chances for Liverpool, second only to Daniel Sturridge and made 15 passes in the attacking third, second only to Mo Salah.

He linked up well with Joe Gomez and Andy Robertson, while he fed Salah the ball nine times, including for the goal. His key pass stats for the season are generally impressive. He currently averages more per game than Trent-Alexander Arnold, Gini Wjinaldum and Naby Keita, despite playing more than 45 minutes in a match only once.

Match that with his better than most expected work rate, much better than expected pointing in a mad jacket and managing to slaughter both Gary Neville and Charlie Adam in the space of a month, I think we can say Shaqiri is largely settling in well.

He would have wanted more minutes, sure, but it is notable that none of the summer outfield signings have played as much as expected, as Jürgen Klopp largely relies on the lads who understand what he expects of them. He’s played less than Keita but more than Fabinho. Considering the competition he has in the front three, that isn’t bad at all.

It’s also notable that he has largely featured deeper than that in the league games he has played in. In the summer we assumed he was bought as competition/rotation for Salah and Mane, but, given the collapse of the Nabil Fekir deal, could it be that Jürgen has now decided to use him as the explosive midfielder that Fekir promised to be? Or is it just a case of versatility helping get Shaqiri games before the need to rotate the forward players?

Shaqiri wouldn’t be the first player Klopp has signed and moved back a position. Just ask Wjinaldum. But Shaqiri being bought as a midfielder would mean Liverpool made no front three signings in the summer which, even with the reemergence of Sturridge, would seem far fetched.

So it’s likely he will feature there at some point. Just maybe not tonight. But either way he has already proved that much of the criticism levelled at him when he signed was unfair. His defensive work might not be exactly what Klopp wants it to be at this stage, but that’s not for lack of effort. It’s more an issue of positioning and knowing when to press.

There has been little in terms of brainless shooting but much more trying to create. He’s looked to link up with his teammates and forge an understanding. It looks like the “trying to win a game on his own” thing came from the realisation he had rubbish teammates. Which, if so, is difficult to disagree with.

For the most part, his attitude seems spot on. He believes in himself massively, and might not be willing to be on the bench forever, but who would be?

He understands his teammates are top class, that he needs to wait, and that the whole thing is much more fun than watching the ball flying over your head at Stoke.

He’s enjoying it and we’re enjoying him too. And there is much more to come.

“We played them back in 1973, they beat Shankly’s Liverpool but it’s a very different side.”

🗣 Subscribe and listen to this week’s lively ‘Under The Lights’ show, previewing tonight’s game in the Champions League 👉https://t.co/q0tg7SFik9 pic.twitter.com/4DaO6orqu7