Is Liverpool's International Break Injury Record A Cause For Concern? | The Anfield Wrap

Is Liverpool’s International Break Injury Record A Cause For Concern? 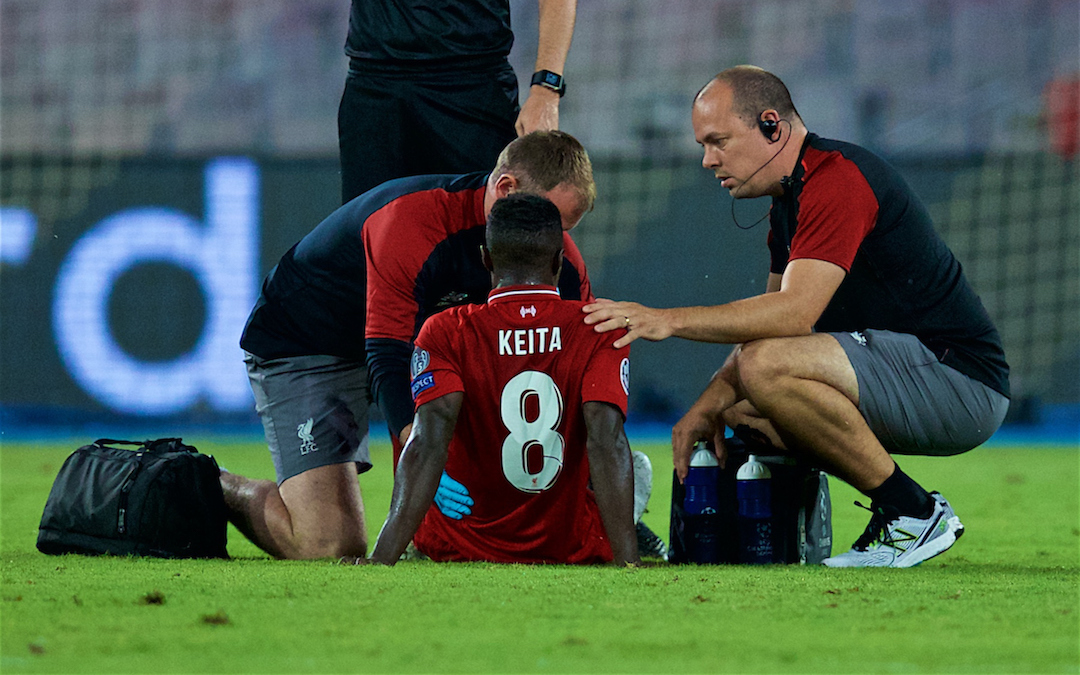 ONE of the funny things about growing up is that you realise everyone’s dad basically tells the same jokes.

I don’t know if there was a joke book that they passed out at Oxford Street Maternity Hospital back in the ’80s — “here you go, the birth certificate, joke book and list of ways to embarrass your kids” — or if its just a generation thing.

It was nice getting to university and realising everyone’s dad shouted “sack the juggler” every time a waiter dropped a plate in a restaurant (which conveniently doubles up as embarrassing your kids too). Or “here he is, I’ve got him,” when a police car went past. I believe they call it shared experience.

If the joke book does exist, then there will be a chapter on football, with such classics as “he couldn’t trap a bag of cement,” — which always just made me wonder, why would you try? — “left back? he should have been left back in the changing rooms,” or “that goalie couldn’t catch a cold”.

My dad’s favourite footy saying was injury related. I have many distinct memories of my dad sat in the kitchen after work reading in The Echo about a latest injury to hit Liverpool’s squad. He’d tut and then shout “tell you what lad, if you take your boots on Saturday, you might get a game”.

I think the news was meant to worry me, but instead it just excited me. Just how many injuries was I away from playing for Liverpool, do you think? And should I actually take my boots just in case?

Even as a child I knew my dad wasn’t serious, and that, if Graeme Souness was forced to go into the crowd for an emergency right back he was unlikely to pick a 10-year-old sat in the Upper Centenary whose school team hadn’t won all season. But what if he did and I hadn’t taken my boots after all? You’d be gutted, wouldn’t you?

I’m telling you this story because, in a wonderfully reassuring way, just this week my dad text me this very joke. It seems Liverpool are in the midst of an injury crisis that, although not quite necessitating a young lad being propelled from Sudley Juniors first team to Liverpool yet, might see a few lads starting against Huddersfield on Saturday that we weren’t expecting a few weeks ago.

Doubtful due to knocks seemingly picked up in the most recent internationals are Mo Salah, Sadio Mane, Naby Keita and Virgil van Dijk, adding to the injuries the club already had going into the break. I understand the frustrations. It always seems to happen. According to sports scientist Simon Brundish, over 35 per cent of games missed by Liverpool players in the last four years have been due to injuries picked up during international breaks.

This is a ridiculous percentage given how infrequent international breaks are and makes you suspicious of how well they are being looked after. Basically, to butcher Arsene Wenger’s much more eloquent metaphor, if you lent your mate your car once every eight weeks and he kept breaking it, you’d stop lending your mate your car.

You know what, it’s fine. The injuries seem minor, or maybe even made up, and players seem to enjoy international football for some reason so I guess we have to cop for it on this occasion. But also, we’ve got loads of really good players. A squad built for this eventuality. Players who haven’t played much who are chomping at the bit to do so.

I interviewed two ex-Liverpool players yesterday, with very different careers. One played over 100 times for the reserves, but never managed a first-team game, while the other was Kevin Keegan, who did a bit more. But they both talked about opportunity. Key moments as a young player that were instrumental to them, but largely out of their hands. Luck, circumstance, fortune or otherwise. It all plays a part.

This next week or so could be the start of a great Liverpool career for someone, or the resurgence of another. You might read about it in an autobiography one day. “It was frustrating start to the season, but Mane got injured and then I was in.” That’s what they will believe. The lads on the fringes. All footballers do.

I don’t know if that is what will happen, but what I can be certain of is that 1-11, Liverpool will be better than Huddersfield in every position this weekend. That’s not to say Liverpool will definitely win the game, football would be boring if that were true. But if Huddersfield do win, it won’t be because they have better players. It will be because they’ve outfought us, concentrated harder or just approached it better. All things which are in control.

So we might have to play Daniel Sturridge, who is better than any Huddersfield forward since Denis Law, or Fabinho, who we’ve just bought for more than the entire Huddersfield squad combined. No one is going to feel sorry for us, and neither should we. Negativity is our biggest enemy and will be our biggest downfall. Eleven lads who are brilliant at football and are paid a lot of money to play for Liverpool will take the field on Saturday and they’ll be ready. So don’t worry.

Unless of course you see me, clambering over the advertising hoardings, six pints in with my boots in my hand trying to fit into Adam Lallana’s shorts. Then, maybe, we can all start to panic. But until then I reckon we’ll be fine.