Adam Lallana: Is Jürgen Klopp’s Go-To Man Now In Danger Of Being Forgotten? 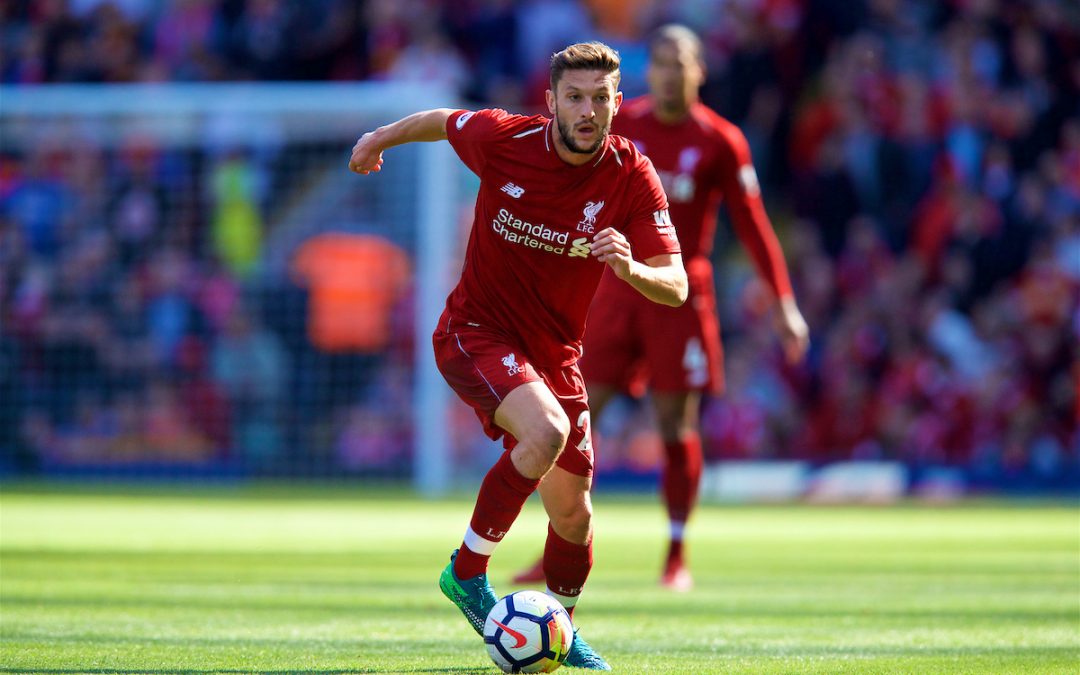 NEWS that Adam Lallana’s injury sustained during international break isn’t as bad as first feared is positive news for player and club. That said, it does rather feel like injury timescales, especially in the case of Lallana, now 30 years old, need to be taken with a pinch of salt.

Lallana is one of those players who seems to be able to make a two-week injury last two months. I’m sure last season he was “back in training next week” four weeks running. In the summer of 2017, we were told he would be out for two months, yet the only thing he was doing two months later was flying to Qatar to see a specialist.

The tipping point for Lallana seemed to be – frustratingly – when he got his new contract in February 2017. He had played 49 times in all competitions the previous season and 27 times so far in that one. After the new deal he played just eight times more that season and only 15 times in the whole of 2017-18. His record so far this season reads: appearances – one, injuries – one. It’s not great.

Of course he isn’t getting injured on purpose. Footballers like to play football. But it isn’t ideal either. Apparently it is Lallana’s 18th injury since he signed for Liverpool four years ago. And they are just the ones he tells you about. And it appears to be getting worse.

I’m not that bothered from a Liverpool point of view, really. We have to pay his wages, of course, but I’m sure we can afford it. But you do worry for him. The worst thing from a Lallana point of view is that this injury was largely met with a bit of a shrug of the shoulders from all concerned.

This season all the midfield debate has been whether Jordan Henderson should be starting, or where and when Fabinho fits in. There has been very few people putting forward the case for Lallana. Even Alex Oxlade-Chamberlain feels fresher in the mind. When I talked about Lallana being injured, one reaction was, “well at least we will probably see Curtis Jones in the League Cup now”.

The worst thing you can become at a football club is irrelevant. It has happened to a few of that core now that seemed so vital to Jurgen Klopp just a couple of years ago. When Divock Origi was leading the line at Dortmund, Lallana leading the press, Nathaniel Clyne at right back and Simon Mignolet between the sticks.

They are all still there, but increasingly in name only. Other players step up and become trusted soldiers in bigger battles. Football moves on and the club develops. Further players continue to be linked – Adrien Rabiot, just this week and young players bang the door down.

Jurgen Klopp has proved to be a manager who rewards efforts, performances and endeavour. This has been a positive for Lallana in the past, but might be a negative now. If other players prove themselves more dependable, perform well and are getting results for the football club, why change it? Why risk upsetting a reliable player to please one who might break down again so quickly?

I still like Lallana. He’s two footed, hard working and lovely on the eye. But he needs to get back to be useful soon. He’s gone from “first name on the team sheet” to “Really missing him” to “good player but can’t rely on his fitness” and is nearly at the dreaded “good lad to have about the place”.

You’re better than a mascot, Adam. But you are running out of time to prove it. A football club waits for no man.