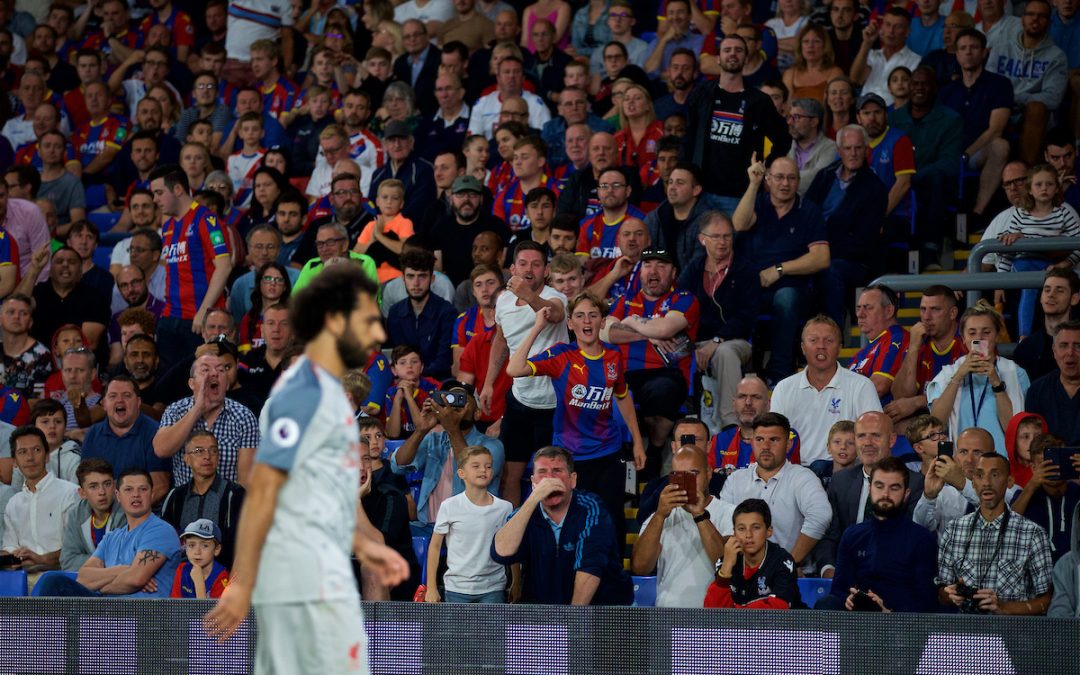 THE season starts. God, you felt that, didn’t you?

God you lived that, didn’t you?

God you loved that, didn’t you? Didn’t you?

What it is to be alive. Liverpool gave us that tonight. Being fair, so too did Crystal Palace.

It was visceral football from both sides. It was meaty football. It was the real deal, the first proper great game of the season. It had heft and presence. It kept announcing itself over and over and Liverpool had to cope with it. Before a ball had been kicked on this fixture list this was a game that stood out. Monday night, under the lights, Selhurst Park. Palace vs Liverpool.

And, therefore, fair play to Palace. They brought the best of themselves. Andros Townsend nearly scores a Tony Yeboah, nearly produces the full business. Wilf Zaha is so potent, every time he picks the ball up he screams danger. Patrick van Aaanholt is a footballer. And Aaron Wan-Bissaka is marvellous and, under duress, does the right thing, and my God what a player he is. Let no one tell you otherwise. They are quick, strong, brilliant on the ball. They finish top half. They terrify our rivals. They have 12 games against the top six. That we have won one should not be diminished. What a game to win.

Liverpool play 38 games and at least 15 of them will be, in comparison to this one, utterly sterile. It should not be such. But we all know it will be.

This game was alive. It was vivid and it was active. Until the 93rd moment this was a contest. It was a contest Liverpool won.

Liverpool defended brilliantly. What is important there is the idea that defending wasn’t just about sitting deep and blocking. Liverpool played some brilliant front foot football to aid their defending. Both Joe Gomez and Virgil van Dijk were able to pick their moments to influence play; They got to be excellent centre halves as part of a unit rather than excellent emergency measures. James Tompkins was on the stretch. Mamadou Sakho was on the stretch. Liverpool’s players rarely were.

Through the whole game Liverpool had a guiding intelligence that Palace struggled to deal with. All of their moves were improvised whereas Liverpool felt rehearsed, in the best possible sense. These Liverpool players love and adore each other and want to know each other’s every move from the outset.

There were exceptions: Naby Keita turned away and found Mo Salah with the most glorious inspiration imaginable. Liverpool’s finest footballer should have found the net but instead punted over. It would have been a remarkable goal, a goal to tell one hell of a story. Instead Salah ended the game goalless and perhaps slightly frustrated. Yet he assisted both Liverpool goals.

We won 0-2 and we deserved to win 0-2. We were the better side across the board. Yet there was a ton going on. Wan-Bissaka against Mane; where James McArthur was at any one time vs what the momentum suggested; Christian Benteke vs himself. An ongoing battle that last one. But everywhere else on the pitch football was happening. Players had to demonstrate their qualities.

It was a joy to behold. The easiest thing in the world when Liverpool come to town is for a side to hide. But that didn’t happen this evening. Palace wanted to know. They faced down Liverpool and came off second best.

They won’t be alone come May. Liverpool have the presence to face the nation down, to want to swagger wherever they go. It is marvellous and it is incredible. But it is a side maturing in front of your eyes. The strange thing is this: They have done and lived and experienced the hard part. Most sides never properly get that, not the precocious ones, but Liverpool very much have. The know the hard part. But right now they want to make the hard be easy.

Liverpool win the game. They deserve it. But there are 36 more. Nothing stops now. But imagine being these Reds.

They march on, knowing the burden placed on them by their rivals; knowing that perfection is required by September. It is arduous and it is tough. But it is what Liverpool are built to deal with. Tonight was a sensation. Tonight was a ball. Tonight was a joy to be alive. It is exhausting how many more of them we need but this is our reality.