Shaqiri Signs: What The Swiss Star Can Bring To Liverpool 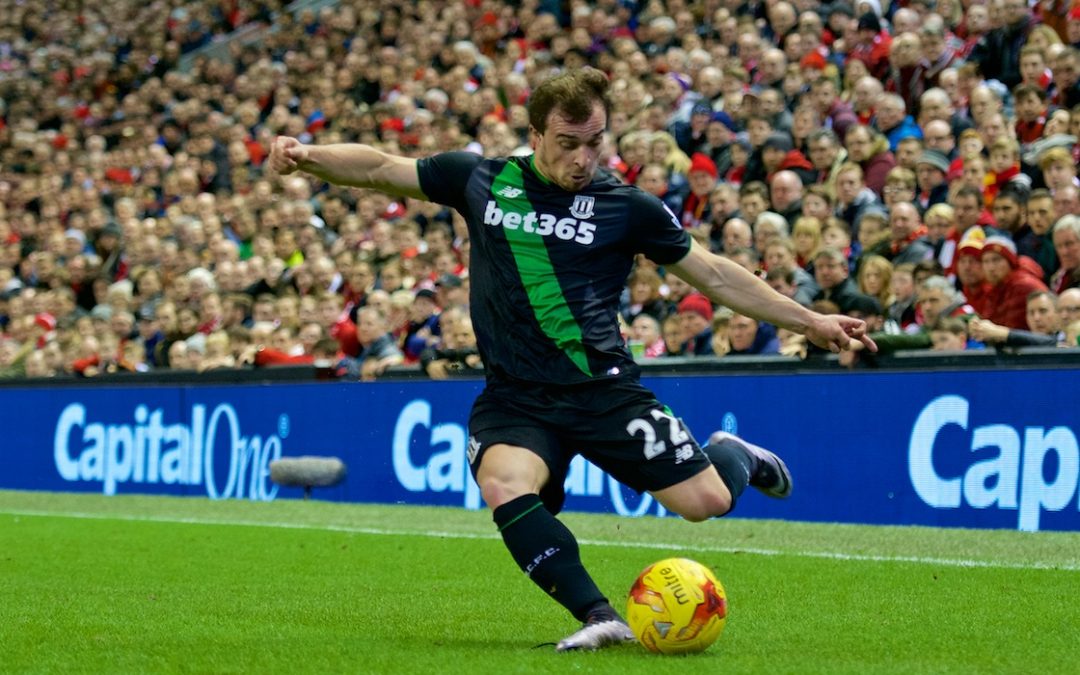 LIVERPOOL have confirmed the signing of Xherdan Shaqiri from Stoke City for a reported fee of £13million, so we took a look at what the Swiss international can offer The Reds.

Background To The Player

Shaqiri was born on October 10, 1991, in Gjilan, a Kosovan city in the former republic of Yugoslavia, to Kosovar-Albanian parents. His family emigrated to Switzerland in 1992, where he grew up and gained his Swiss citizenship, hence his eligibility for Switzerland’s national team.

His youth career initially began with SV Augst before making the move to FC Basel’s youth setup at the age of around nine. While playing for the under-16s, he took part in the Nike Cup and won player of the tournament attracting the attention of several big clubs around Europe. However, he chose to stay with Basel and signed his first professional contract on January 2, 2009.

His first appearance for the Swiss side came as a 17-year-old when he was brought on as a sub against FC St Gallen. His first goal came less than a month later in a Europe League qualifier. From there he went on to make 130 appearances, scoring 23 goals and getting 27 assists — winning the league three times and the Swiss Cup twice.

His exciting performances had several clubs interested in his services but he had his heart set on a move to Bayern Munich since he first heard of their interest and the eventually signed him for a fee of 11m euros on February 9, 2012. At the time, journalist Raphael Honigstein called the move “a coup” for Bayern, and Shaqiri, who remained at Basel until the end of the 2011-12 season, proved that with some stellar performances in the Champions League.

One of those came in a crucial group stage decider with Manchester United, where Shaqiri grabbed an assist and played a key role in another goal as Basel ran out 2-1 winners, consigning the Mancs to a third-place finish and the Europa League knockouts — only the third time in 17 years they had failed to get past the group stage.

Shaqiri’s first appearance for Bayern came as a sub in the last five minutes of their German Super Cup win over Jürgen Klopp’s Borussia Dortmund in 2012. His first goal came in his second appearance, a German Cup match which Bayern won 4-0, with the Swiss winger also grabbing two assists.

During his time at the Allianz Arena he made 81 appearances, scoring 17 goals and getting 19 assists. He was one of the Bayern players to win the only treble in the club’s history, winning a total of three Bundesliga titles, two German Cups, the German Super Cup, the Champions League, the UEFA Super Cup and the FIFA Club World Cup.

However, Shaqiri’s game time dried up under Pep Guardiola and their relationship soured after the Spaniard denied him a move to Liverpool. Eventually Shaqiri was allowed to leave, though Liverpool were again left high and dry as he signed for Inter Milan on January 10, 2015 for a fee in the region of 15m euros.

His first appearance for Inter came just a week after the move was completed as he came off the bench against Empoli. His first goal came three days later in a Coppa Italia last 16 clash with Sampdoria, his first start for the club. In total he made 20 appearances, but only managed three goals and two assists, before Roberto Mancini decided he wanted him off the wage bill.

Stoke, who had apparently tried to sign him just prior to his move to Inter, made a move for Shaqiri but the move initially stalled when he failed to meet a deadline set by The Potters to agree terms — as Mark Hughes believed he hadn’t shown complete enthusiasm towards the move. Eventually the deal was revived and Stoke got their man on August 11, 2015 for a fee of around £12m.

His first appearance came as a starter against Norwich, in which he grabbed an assist, but his first goal didn’t come until December. However, true to the cliche, his first was followed by a second in the same game, a 4-3 win over Everton in which Shaqiri scored the club’s goal of the season with a chip over Tim Howard from outside the area.

In March 2018, Shaqiri caused a stir by saying his teammates lacked quality and that even Ronaldinho would not improve the team, in an interview with a Swiss magazine. He was eventually proved right though, as Stoke were relegated from the Premier League.

The Swiss international is coming off the back of his best season at Stoke with eight goals and seven assists, despite their relegation. In total he made 92 appearances, scoring 15 goals and getting 15 assists. Although the overall numbers don’t look great on paper, people had the same fears over Alex Oxlade-Chamberlain when he arrived from — on top of questions about how much of a role he would play and look what happened there.

Shaqiri most recently appeared for Switzerland at the World Cup, assisting his side’s only goal in a 1-1 draw with Brazil and scoring in their second group game against Serbia — which he celebrated by making a wings gesture with his hands, in tribute to his Albanian heritage, after being booed by Serbia fans before the game. The winger has won a total of 75 caps for his country, scoring 21 goals and getting 19 assists.

Summary Of The Deal

As mentioned earlier, Shaqiri revealed that Bayern had denied him the chance to join Liverpool in 2014. “I had offers from Liverpool and Atletico Madrid. I opted for Liverpool. Brendan Rodgers contacted me a few times during the World Cup. But Bayern blocked my move.”

Liverpool had further reported interest in Shaqiri when he was set to leave Bayern in 2015. From there his unsuccessful spells at Inter and a couple of below-par seasons at Stoke would have had supporters thinking The Reds had dodged a bullet.

The club’s renewed interest was confirmed by local journalists at the start of last month, with Klopp looking for greater depth in the forward positions. The belief seems to be that he’s mainly to be used as backup for Mo Salah on the right, but he has played on the left and through the middle numerous times throughout his career so has the same versatility the manager seems to look for in his signings.

Suggestions were that the club would wait until after the World Cup to get any remaining deals tied up and so it has proved with Liverpool agreeing a fee of £13m with Stoke yesterday, slightly higher than the initially reported release clause, after Lazio tried to make a late counter offer. Shaqiri cut his holiday short to take part in a medical on Merseyside and joins The Reds on a five-year deal.

Thorsten Fink (Basel manager 2009-2011): “He lives on the fun that he has on the pitch, and if there’s no fun, it becomes difficult for him. He’s a real street footballer.”

Heiko Vogel (Basel manager 2011-12): “Shaq is small but he is a giant. He is carefree, plays with a lot of self confidence and is also creative.”

Jupp Heynckes (Bayern manager 2012-13): “Shaqiri has an exceptional talent and an excellent left foot. The right — I suppose — is just there, so he does not fall over.”

Matthias Sammer (Bayern sporting director 2012-2016): “He is a player who is capable of holding the ball and of producing surprises and creativity. That makes him unpredictable.”

Mark Hughes (Stoke manager 2015-2018): “Shaq is probably more of a ball manipulator rather than being the guy whose game is solely based on pace. He will draw people into challenges and then skip past them. He’s able to pick the right pass at the right time and create chances”

Paul Lambert (Stoke manager 2018): “The way he’s playing, he’s right at the top of his game, right on top of his game. Wherever his career eventually goes, he’s a top player.”

The majority of Shaqiri’s injury have been muscle related which could be a worry for The Reds if they prove to be a recurrence. However, he did manage to stay fit for the duration of last season, according to transfermarkt.co.uk. 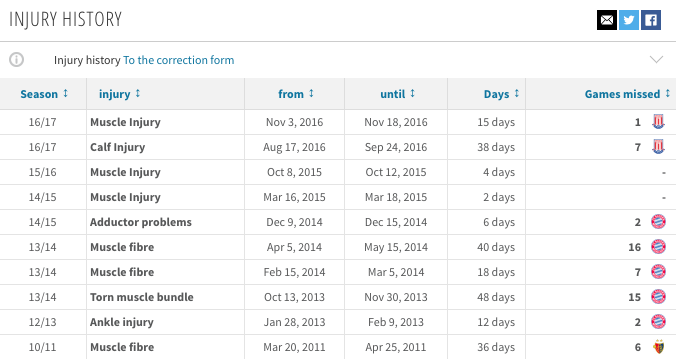 For more reaction to the signing of Xherdan Shaqiri, subscribe to TAW Player…

🗣 Subscribe and listen to our Shaqiri special, including a chat with Stéphane Henchoz, here 👉 https://t.co/lmNtBz4ADz pic.twitter.com/LT7RSIThLN