How Joe Gomez Can Take Centre Stage For Liverpool This Season 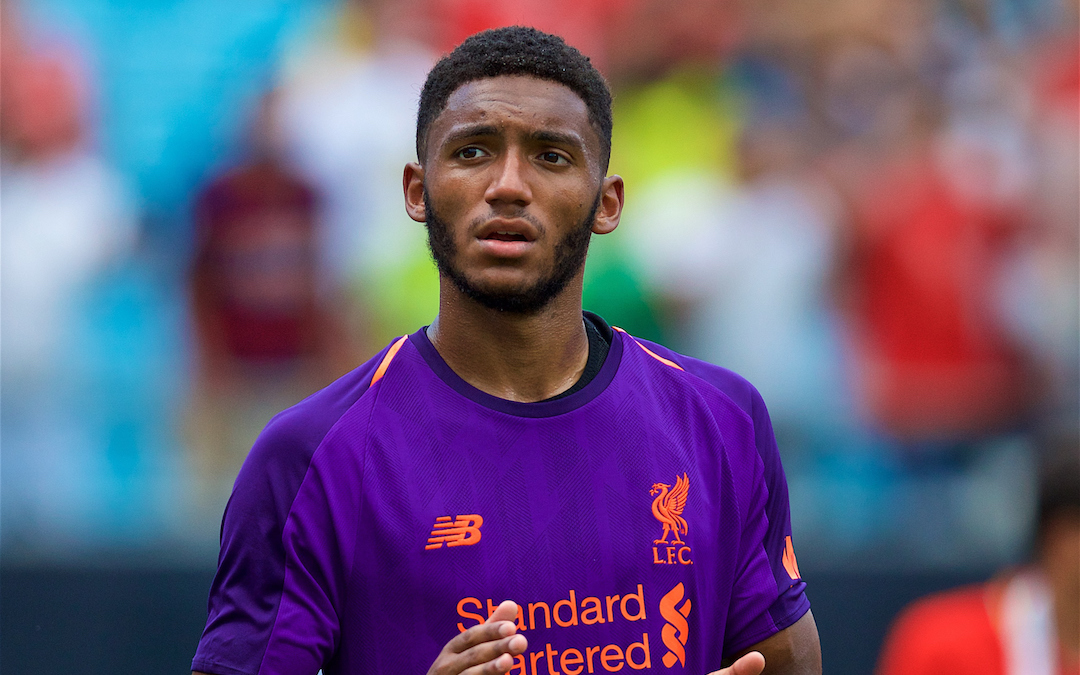 Liverpool have been linked to these three centre halves, and quite a few more, over the course of this summer window. These three are significant, however, because Liverpool’s own website ran a story in mid June reporting that the Guardian was linking The Reds with all three. Yes, that’s Liverpool’s official website there, spreading newspaper gossip about transfer targets.

Now, if I’m Virgil van Dijk or Degsy Lovren, this doesn’t overly worry me. One of them is the most expensive defender in history, an ice-cool colossus who already runs the backline. The other is one of just three players who started both the 2018 Champions League and World Cup finals.

If I’m Joe Gomez though, sitting there rehabbing another injury, my head is spinning a bit. My own club’s media team is creating content around signing players in my position.

Now, we’re just over a week away from the start of the season, it will take some doing to get any of these deals done. It looks like Gomez can rest easy knowing that he will play an important part in Liverpool’s season.

In fact, he is in the running to start the first game of the campaign against West Ham given Lovren’s late return to Melwood. For a player who is heading into his fourth season at the club, and who identifies as a centre half, a league start in the middle of Liverpool’s defence has seemed a long time coming.

It all seems so long ago now, but Gomez started the first five Premier League games of his Liverpool career — during that weird, too-short-but-too-long period under Brendan Rodgers in 2015. Not only did a 17-year-old Gomez come right into the team, he did so out of position at left back.

He also started on the right of a back three in a Europa League group game in the same period. Gomez acquitted himself very well, and looked one of few bright spots in that run of games that saw Liverpool’s love affair with Rodgers fizzle out.

Of course, as Rodgers went on to be replaced by Jürgen Klopp and Gomez went down with a cruciate ligament injury. Those five games in 2015 would turn out to be his only league appearances for two years.

His road back to first-team contention largely went through that fever-dream FA Cup run of 2016-17 and hit a rocky patch with a disastrous performance at centre half in defeat to Wolves at Anfield.

Then injury to Nathaniel Clyne in pre season last summer opened up a door into the first team; one he crashed through, alongside Trent Alexander-Arnold.

Isn’t it funny how your mind plays tricks on you? When you think back to 2017-18, the image of a young defender tearing it up at the back for The Reds won’t bring Joe Gomez to mind, but Trent. Trent was the one who silenced Leroy Sane twice in two weeks, the one who danced with us in Rome, who played in the Champions League final and who went to the World Cup with England.

Yet, before picking up an injury in March that would eventually end his season, it was Gomez who Klopp went to for Liverpool’s stiffest defensive tests. In fact, for the season in total, Gomez clocked up 31 appearances in all competitions, compared to Trent’s 33. Gomez even made more league appearances than Trent — 23 versus 19.

Gomez’s injury cost him a place in the squad that reached the Champions League final, at the very least, as well as a likely place on the plane to Russia with England.

But now he is back, again on the comeback trail from injury, again looking to pick up where he left off — just in a slightly different position.

Gomez’s time in the full-back positions, especially last season, has developed his games in ways which make him suited to how Klopp likes his centre halves to play.

"I know you're going to say that you'll play anywhere, but do you want to be a centre-back?"

🗣 Subscribe and listen to all of our coverage of the Reds' US tour, including an exclusive interview with the manager 👉 https://t.co/lmNtBz4ADz pic.twitter.com/HcAuMRkljk

Arriving at Liverpool with a reputation as a ball-playing centre half, his apprenticeship in a position in which Klopp is very demanding of his players has only served to hone his skills further.

Looking at his performances in the league least season, he assisted two goals, created a further two “big” scoring chances and averaged a pass completion percentage of 82 per cent. For a player not thought of as particularly gifted in an attacking sense, he boasted an impressive 88 per cent dribble success rate and won 60 per cent of his duels. Pleasingly, his defensive game did not suffer for his attacking endeavours, completing 1.6 interceptions per game and 2.4 tackles per game.

All of those numbers are basically to say that Gomez spent last season in a football finishing school, playing 31 times in the most important position in modern football.

For so long, full back was somewhere you hid your weaker players. I know, because I played full back my entire footballing life. But increasingly, with the death of the traditional winger and the return of three at the back, full backs are now among the most important tempo setters on the pitch.

More and more teams are converting midfielders to play as full backs, exploiting their apparent advantage in technical terms. Trent is a case in point. In not just surviving but thriving in this environment, Gomez has shown his technical footballing ability for all to see.

Liverpool will look to compete on four fronts this season. Both van Dijk and especially Lovren have shown a tendency to miss the odd game with injury, and Klopp was only too happy last season to rotate his teams. Gomez is jostling for position with Ragnar Klavan and Joel Matip as the season begins.

Not many players last four years at Liverpool without having something about them. Fewer come back from a few serious injuries to do so. And even fewer still do it in multiple positions.

Gomez is 21 now. If he can seize this chance at centre half, and cement himself as the next cab off the rank when van Dijk or Lovren are missing, we might just be looking at the next decade of Liverpool’s defence.

“Every summer I fall in love with Daniel Sturridge all over again.” 😩