Liverpool And The European Cup: The End Of One Story Is The Start Of Another 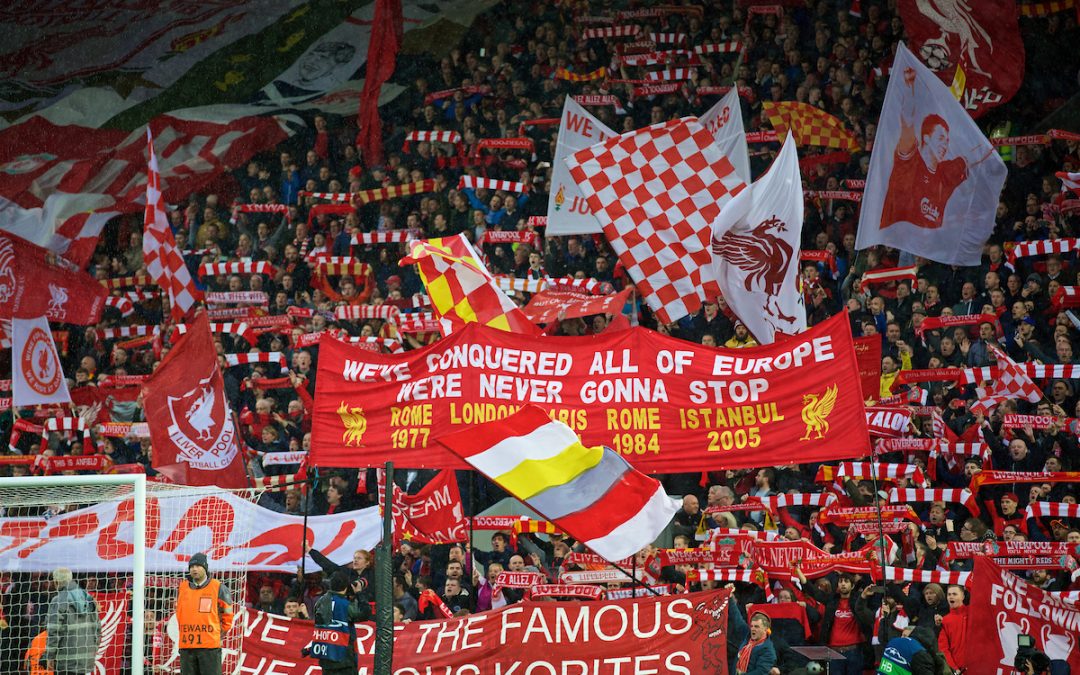 I’LL be honest. I like being honest to start.

I’m writing this in the Schrodinger’s ticket time, the hanging on for the ballot time, the tweeting about travel companies making a killing time. The waiting time. The hoping time.

I have the six home games. I don’t have the away game. I’m watching WhatsApp, I’m watching mates talking about Gatwick to Lviv via Vienna and train to Kiev, and repeat to return, and I’m watching prices rise. By the second.

And I’m debating. I’m debating whether, if I’m one of the “one in three point seven”, I can justify going to the game. I’m balancing priorities. I’m 54. I have priorities. That’s how life works. That’s what comes with time.

This is about life and time.

Dave talked about the importance of us being there, talked about how important it had been to him, my dad, my uncle Len. It went unstated but the conversation held a lot of how we pass these things down, how support is about the generations; what we give to the next and what they invent for themselves. 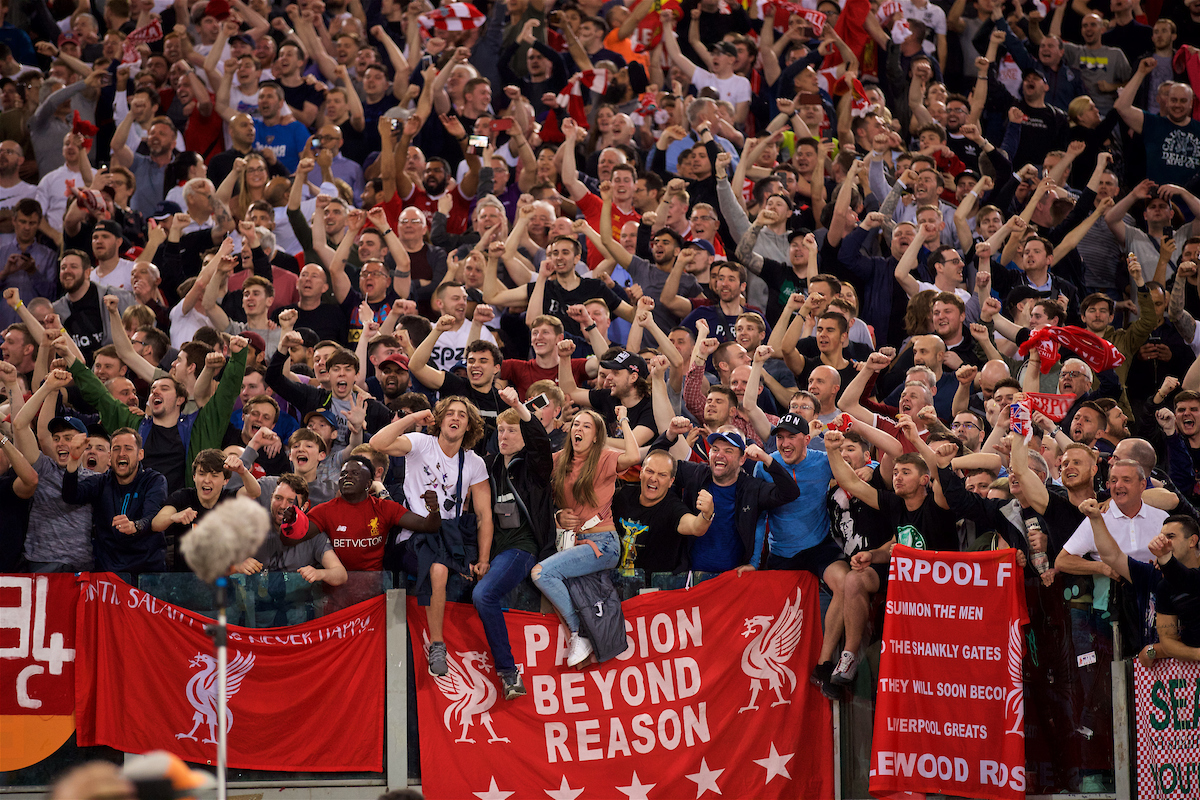 This is about the generations.

Dave’s not a young man anymore, not good on his feet now, his matchgoing days are behind him. My dad and Lenny are gone. Somewhere along the way, this became ours. They passed it to us.

Aways have never managed to be a thing for me. Work, life, commitments, priorities, the usual stuff. So I never actually did one until a wonderfully disappointing night in the rain in a Swiss city where I realised, in my early 50s, how much fun everybody else had been having all this time.

The journey, the adventure, the planning, the meeting up, the getting there, the sitting in an Italian square arguing over whether Negronis were appropriate drinks for an away experience. The Daniel Sturridge goal, the half-time songs. The second half, the walk back in the rain, the hungover drive. Everything combines, everything is needed.

Watched the 2005 final in the house. Half time, in the kitchen, an extremely large, extremely necessary glass of red in my hand, our Tom, then only nine, comes to me and says: “Don’t worry, Dad. There’s still another half.” “I know mate, I know, and you can’t give up, can you?” He leaves the kitchen, I turn to my wife and say, “we’re fucked here.”

He knew more than me. That’s how it works sometimes.

Tumbling backwards down the Wembley steps in 1986, holding onto my mate and screaming “we’ve done the fucking double”. It’s so bloody long ago, how come we still feel like the same people?

I turn round in the UEFA Cup final and my mate’s sat two rows behind me. Unplanned, unexpected and exactly the way you want time, and life, and coincidence, and destiny to work.

The 2007 semi final. Anfield. Except it’s only the district, not the ground. We can’t get tickets so we’re outside trying, and then we’re in The Albert watching on TV. The last penalty and we’re running. I’m not entirely sure why because I’m drunk and I’ve forgotten maths. The Kop doors are open and there are those coming out. We’re not, we’re going in. And we’re dancing on The Kop. We’re on TV, dancing on The Kop and then having to explain how we weren’t actually at the game.

In 2013-14, as we head towards the almost. We’re meeting the bus and I turn to my mate, down from Scotland for the game with his son — in the same way that, two years later, I’ll turn to him in the Wembley Hilton as we both get giddy over the idea of Jürgen’s first set of lads leaving the lift and say “how old are we?” — and I say:

“I envy these lads. We never had this. Not this. Not the meeting the bus and the pyro and the filling the roads, not like this. We got used to winning things, we got too used to winning things, we thought it would go on forever. We were shocked when it didn’t. These lads though, they’re getting it for the first time, they’re building up to everything happening. I envy them that.”

Something like that, anyway. Probably less of a soliloquy, if we’re being honest. 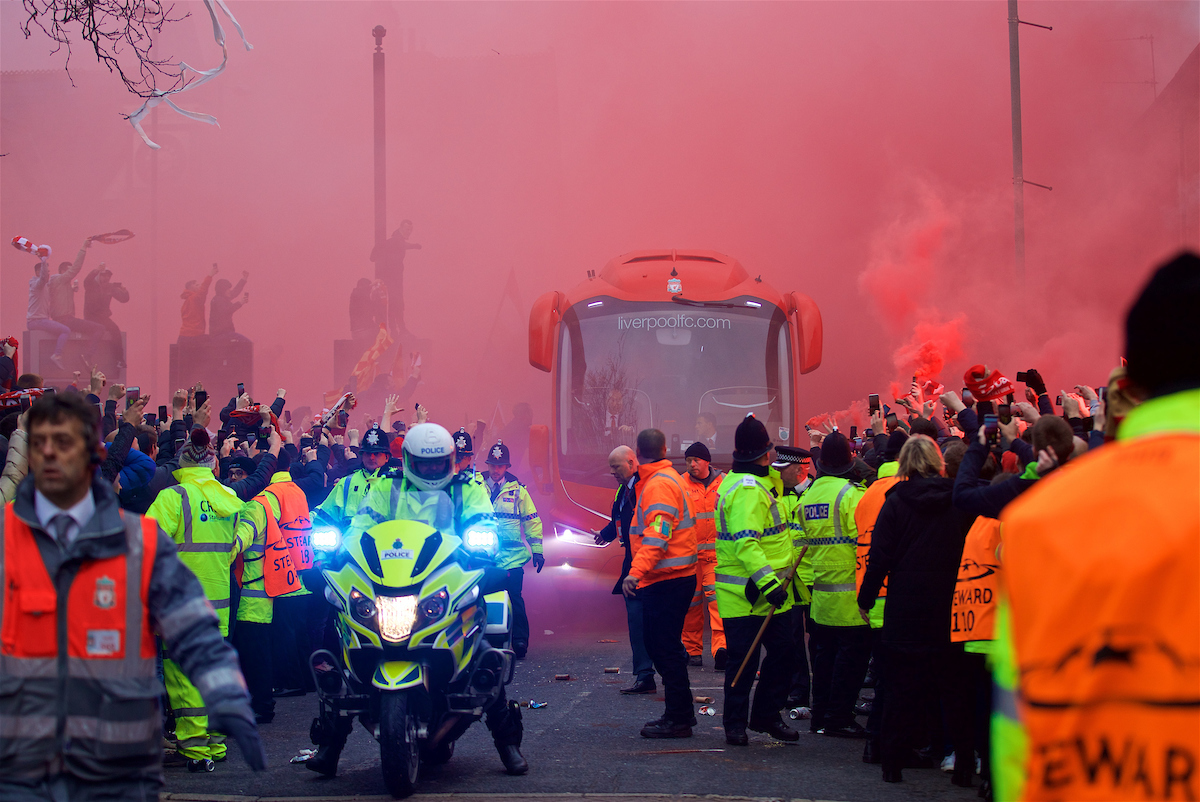 Roma. At Anfield. As ever, at Anfield. I’m in my seat, the guy next to me is in his 60s, the guy next to him? Sixteen? Seventeen? And Mo Salah’s scoring and we’re all screaming, all leaping, all part of the same mass. In time, some of us will leave that mass behind, be left behind by that mass. But it goes on. It goes on.

The best thing I’ve heard recently was the podcast the lads from The Anfield Wrap did from Rome after the second leg. Genuinely, the lads. John Gibbons was the oldest in the room. I actually *am* old enough to be Gibbo’s dad. And Gibbo was too old to be on this one.

And it was about how you forge your own way of supporting, how certain eras gain certain songs, how they belong to certain sets of fans. How certain times are for certain people. This was their night. The energy, the passion, the hope, the realisation that they’d seen something start, seen something new, was unreal.

For us to watch Kenny emerge is for these lads to watch Mo. Our Keegan, Heighway, Barnes, Beardsley, Aldridge is their Bobby, and Sadio, and Alex, and Andy, and Virgil and Trent, in the way they were our dads’ Hunt, and St John, and Sally, and Yeats, and Smith, and Lawler and Lawrence. It all goes on.

The lad at the Roma game, the lads podcasting from Rome, Peter’s son, my nephews; I envy you. This is yours. It’s still ours and we’ll never let it go but it’s yours and it’s going to become more and more yours. Jesus, the things you’re going to see.

Remember every single moment. This all matters more than you know. This is about your life.