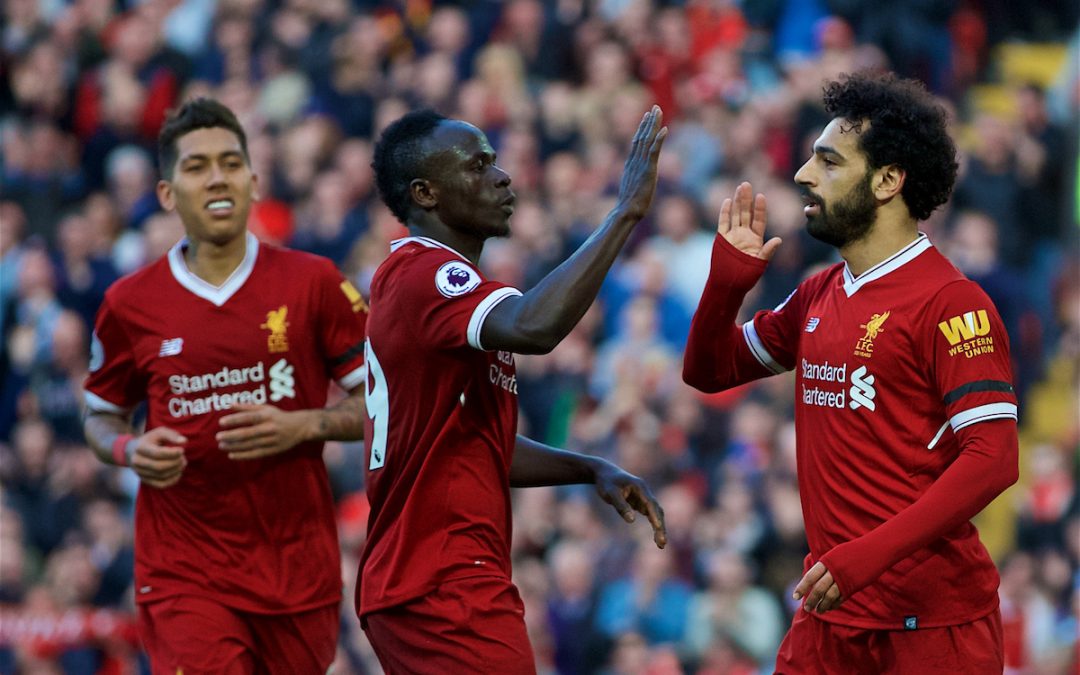 THE headlines will once again be taken by Mo Salah, who by scoring again today maintains a streak of at least a goal a game at Anfield stretching back to Boxing Day.

However, the catalyst for today’s victory was the lesser mentioned of the three fellas; Sadio Mane.

The narrative around the Senegalese international, who celebrated his 26th birthday this week, is that he’s failed to reach the heights of a sensational first season at Anfield.

The story around Sadio has been one of supposed struggle, framed in the unfair context of the irresistible form of Mo Salah and the irrepressible Roberto Firmino.

In the opinion of a significant number, Sadio has suffered what some gobshites might refer to as “second-season syndrome”.

This is neither true, fair or accurate, and is as offensive as his supposed jealousy induced sulk around the form of Salah, which was touted by those keen to join the dots earlier in the campaign.

A victim of his own initial success, Mane has played the third man all season without complaint, doing the dog work for Salah, Firmino and earlier Philippe Coutinho, selflessly switching sides to the benefit of his colleagues, stretching defences and creating gaps in opposition defences which are key to everything Liverpool do going forward.

44 – Sadio Mané has now scored 44 Premier League goals, overtaking Demba Ba (43) for the most of any Senegalese player in the competition’s history. Potent.

4 – Of players to have hit 10+ goals in all of their Premier League seasons, only Sergio Aguero (7) and Eric Cantona (5) have done it more often than Sadio Mané (4). Decimator. pic.twitter.com/jAaclEx7MO

The selflessness of Mane is as important to this Liverpool side as any other quality of any other member of the squad.

Despite the Liverpool rumour mill going into overdrive, the only frustration expressed has been with himself, a quiet patch after one poor decision in the derby taken too heavily on his own shoulders when others should have perhaps been on hand to relieve the pressure a little.

It could be that Mane suffers from perception bias, through not being as easy on the eye as Firmino or as stylish as Salah, but the joy with which he plays the game is plain for all to see, as is his importance to those that matter; his teammates.

And his importance to the manager cannot be overstated. His involvement over two legs against Manchester City and again today also cannot be overstated, scoring the all-important early goal to calm any worries of an “after the Lord Mayor’s show” performance — that Liverpool supporters have too often become accustomed from others in the red shirt down the years — to put him on course to better last season’s numbers for The Reds.

Not bad for a shit season, eh?