Liverpool: Nine Potential Stars That Could Have Shined Bright At Anfield 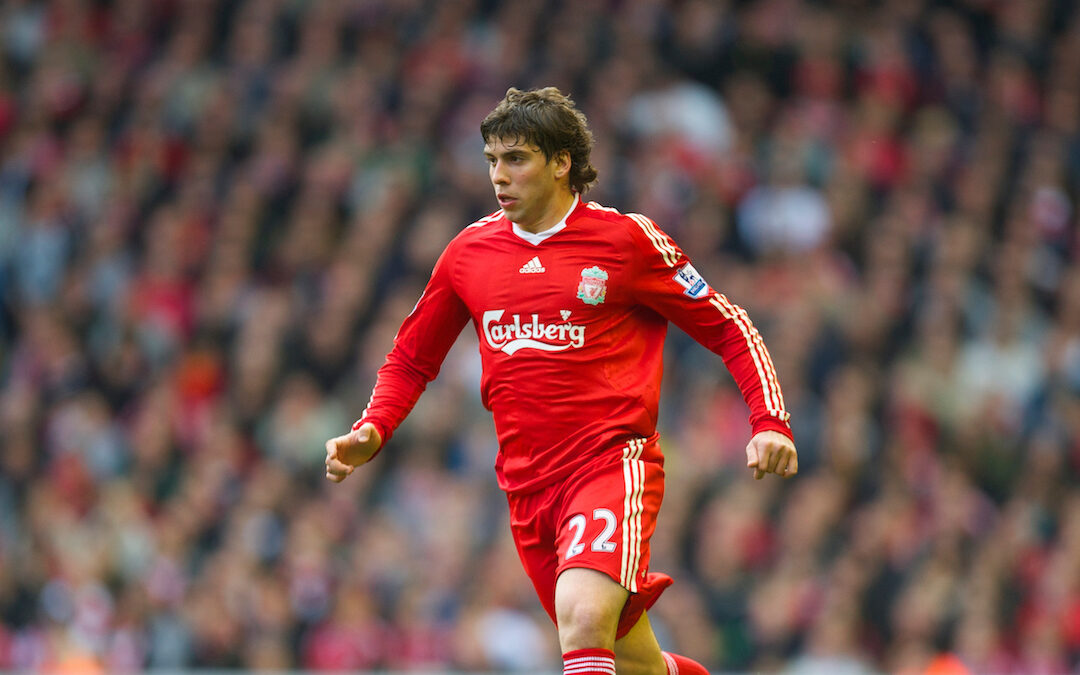 IT’S 10 years ago today that an 18-year-old Emiliano Insua made his Liverpool debut with a start against Portsmouth. He came to the club as a youngster who many believed had a bright future at the club but, for one reason or another, it wasn’t to be.

As a team with a reputable academy and supporters that are intrigued by young players coming through the ranks, there have been several youngsters over the years that have had Kopites excited and holding out hopes for bright futures at Anfield.

We took a look at nine former Reds youngsters that we once had high hopes for but never quite made the grade.

Left-back has been a problem position at Liverpool for as long as memory serves. Most will highlight John Arne Riise as being the Reds’ most steady tenant, but that brings back loads of bad memories of him being a bit of a div.

So when this lad comes in from Boca Juniors — initially on loan and then permanently — hopes were high. Heightened further by a string of decent performances in 2009-10 when Fabio Aurelio inevitably suffers from injuries.

But such is the fickle world of modern football and the burden of expectation, Insua came in for some stick when his performances started to decline. Liverpool couldn’t really afford to take the youngster out of the limelight due to a lack of cover and then there were question marks.

There were still those that recognised his potential but Christian Purslow was almost certainly not one of them (hmm…). Insua went on loan to Galatasaray and Roy Hodgson signed Paul Konchesky.

THE most high profile of a host of young foreign signings made under Gerard Houllier who ultimately failed to make an impact at the club. Pongolle had been player of the tournament at the FIFA Under-17 World Championship, having finished with nine goals. However, once he finally arrived from Le Havre following a loan spell back to the club, injuries and not being that good ultimately held him back.

Pongolle did at least get a brief moment in the sun under Rafa Benitez, scoring the equaliser to set Liverpool on the way to a famous 3-1 win against Olympiakos. However his performance in the 2-1 home victory against Arsenal the same season was arguably more impressive, even if it was Neil Mellor who grabbed the headlines.

After leaving Liverpool in the summer of 2006 Pongolle actually enjoyed a decent career in Spain, including a spell at Atletico Madrid before a bit of a mad world tour playing footie, including rocking up at Dundee United last season. Never did become the next Thierry Henry, though.

TONY T as only I called him was signed at the same time as Pongolle and the whispers were he was even better than his cousin, I always forget they were cousins, who had made all the headlines with all the goals.

However, when he came he just looked a bit small and not that bothered about footie. He played like a man who didn’t understand what the point of the whole thing was. And then to make it even worse we sent him to Sunderland on loan.

He did help us beat Juventus as home, though. With Scott Carson in goal. What a time to be alive that was.

THE sad thing about Mark Gonzalez was that he was exactly what we needed. Exactly what we’ve always needed. A direct, aggressive, single-minded, wide man.

He was all these things, just not very good.

Then ‘the man’ said he needed a work permit, so he couldn’t actually play for us. It was so frustrating. He was farmed out to Real Sociedad for a year, so by the time we actually got to see him in a red shirt the anticipation levels were off the scale.

Sometimes it’s better to travel than to arrive. And so it proved with speedy Gonzalez. He was simply not worth the wait. We’d been had off.

Rafa tried to accommodate him but it was swiftly apparent that Mark G was a false prophet. You’d have Ryan Babel over him every day . He scored three times in his year at Anfield and I couldn’t tell you anything about those goals apart from the fact that I was there to forget them.

Like all of these Will o’ the Wisp nomarks he went on to have a brief flirtation with goodness only after he left us. He scored 10 goals in 44 games for Real Betis in La Liga, before his career petered out in ever decreasing circles. He still gets a game for Chilean legends Colo Colo, word has it.

Looking forward to seeing him filling out the Liverpool legends quota alongside Christian Poulsen, Steven Gerrard and Fernando Torres in a few years time. Kids will turn to their dads and say: “who’s that, dad?”

IS it a little bit special if a local lad is coming through the ranks and could be the next big thing? Does that question even need answering?

It’s all a bit Roy of the Rovers when it happens and football needs more romanticism not less. So when there was talk that a lad from Seaforth could be ready to follow in the footsteps of Jamie Carragher and Gerrard, fans were rightly excited.

An eye-popping goal from close to the halfway line for the youth team versus Carlisle only led to more hype, and Hammill — who had been on the books since age seven — was a key part of the Reds’ 2006 FA Youth Cup winning side.

His talent was obvious, the only questions – even at that stage – were over his attitude. Hammill could weave through players with ease, and had a deadly shot on him – he just didn’t seem so keen to feed his team-mates at times…

A string of loan spells followed before Hammill ended a 14-year association with Liverpool when he left for Barnsley for £500,000. Ups and downs on and off the pitch have followed, but his talent remains clear, as does his eye for goal.

THIS one is still hard to take. Dani Pacheco comes from Barca to Liverpool but fails to bring us any tangible joy.

He comes from Barca and is comfortably the best player in Liverpool’s academy. The staff are genuinely raving about this lad. Rafa is basically looking for the ideal point to bring in him — he’s not far from the minds of anybody working at the club.

What’s weird is that it just never really happens, never really gets going for Pacheco at Anfield. He gets a fair amount of bench time over the course of the 2009-10 and 2010-11 seasons and then he starts going on loan.

None of what he does on loan makes anybody at Liverpool sit up and take notice, and he’s gone by the end of the 2013 summer window.

Here are some of the best:

Not exactly a high bar.

Jack Robinson seemingly had the potential to Fosbury Flop right over it and reach the summit of that list. Making his debut versus Hull City in what proved to be Benitez’s last game in charge — aged 16 — the local lad became the youngest ever player to feature in the Liverpool first-team and on that summer’s day hope sprung eternal for the young defender. If not for the fella who brought the club its fifth European Cup. Well in, everybody.

Robinson’s second league appearance came as a 22nd minute substitute in the 1-1 draw with Arsenal on a sun-kissed, Sunday afternoon at the Emirates.

There was plenty to make you smile that day. Dirk Kuyt’s 178th minute equaliser, The King telling Wenger to piss off, the concept of Emmanuel Eboue. And a 17-year-old left-back having the absolute time of his life.

He never did hit those heights again in a red shirt and after failing to displace Jose Enrique and Stewart fucking Downing from the side, as well as some underwhelming loan spells at Wolves and Blackpool, Brendan Rodgers sold him to Harry Redknapp’s Queens Park Rangers in 2013.

With Droopy the dog now plying his trade in the second city I expect to see Robbo rocking up at St. Andrews with Peter Crouch and Niko Kranjcar sometime in the near future.

JESUS Joaquín Fernández Sáenz de la Torre. What a name — there’s seven of them and one is Jesus. Fantastic stuff. Maybe a little bit greedy having seven, so he decided to make up another cool name for himself — Suso.

I’m easily drawn in by an exotic sounding name in football. I’m more excited by a young attacking midfielder from Spain called Suso with his lovely hair and nice boots than a left-back called Jack Robinson. It’s irrational.

Was he given a real chance? Neat and tidy, he maybe missed that extra yard of pace to make it in the Premier League, despite a fairly impressive debut and cup goal in 2015. He’s now thriving at Milan, in a league he’s best suited — but there was always a player in there somewhere.

Shall we dwell on number three? Yes, let’s.

He came having been the best young player at a Copa America Uruguay won. Liverpool signed him and then didn’t play him for a season. Twelve appearances in all comps, eight starts. What was the point of this? He was presumably playing for Nacional. He came to Liverpool to not play. What could he have shown in training? And if he wasn’t ready, he just wasn’t ready. That’s fine.

The following season he started Liverpool’s second game of the season against Manchester City and played well in Daniel Agger’s absence. Martin Skrtel didn’t play as well. Liverpool drew 2-2 off the back of a Skrtel error. He looked tidy enough.

And then he didn’t start another Premier League game until the second to last game of the season away at Fulham. I am not criticising the decision to put Agger back in or persevere with Skrtel, not really. If there is anywhere on the pitch where you want stability and not to take chances it is centre-back. That’s fine. So don’t buy him then. Why bother? See also Tiago Ilori.

He’s now at Sporting in Portugal. Maybe he would always have ended up there. But regardless, what a waste of everyone’s time that was.