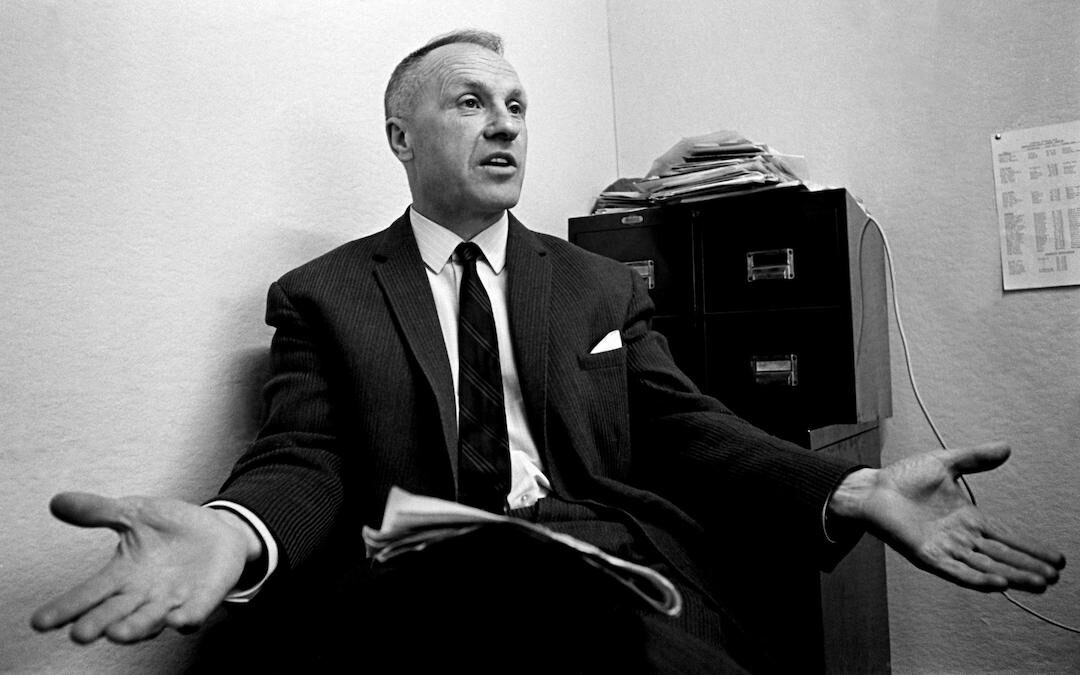 TODAY, September 2, marks 103 years since legendary Liverpool boss Bill Shankly was born in Glenbuck, East Ayrshire. Shanks took charge of Liverpool in 1959 with the Reds in the second division. Fifteen years on, he had transformed the club, having racked up three first division titles, two FA Cups and the UEFA Cup.

THEY say you never forget. Those momentous, jaw-dropping moments that shake your world and shape your life. They’re with you forever, like it or not.

I still remember when I heard the news. A grey September morning, 1981. Bleary-eyed and yawning, just another unenthusiastic kid reluctantly preparing for a pointless day at school.

The radio hums with muffled voices and distant tunes, crashing like thwarted waves on the shores of my consciousness. The news. As ever, it says nothing to me about my life. It’s all Charles and Di, Thatcher and Reagan. Royals and riots.

The first indication that something’s not right comes from my mother. Turning slowly, catching my eye. Tears, at first hidden, then flowing. It might be early, I might be lingering in the realms of half-sleep, but I’m not daft. Something’s definitely not right.

This time the voice is clearer, less muffled, almost too precise. Only then do I start to comprehend. “And our main news this morning. Bill Shankly, the former manager of Liverpool Football Club, has died. He was 68.”

Shock. That’s my overriding memory. Shock, injustice, pain. Still tender in years, death wasn’t something I’d yet had much exposure to. My experiences were largely limited to the cartoon tragedies of Elvis and Sid Vicious and the slaying of John Lennon.

But this was different. This was Shankly. Our guru. Our inspiration. Our leader. The man who salvaged our club, who ripped out the foundations and built it up afresh in his own image. The man who turned Liverpool into a name to be feared across the continent. The man who told us there was nothing we couldn’t achieve if we all stood together as one indestructible red force.

I thought of that first great team, of Yeats and St. John, Thompson and Hunt. The stories had long passed into legend: how Big Ron, the Colossus, was unveiled before a cluster of bemused journalists with a defiant smile and an invitation to take a walk round him; how the all-red kit was introduced as a means to psychologically intimidate weak-hearted opponents; how the unity and belief Shankly instilled, the unbreakable bond between team and supporters, took Liverpool from the Second Division to the pinnacle of the game.

I thought of 1965 and the unbridled emotion of the club’s first FA Cup triumph. Shankly, drinking in the adulation of the euphoric red masses, motionless, one arm proudly raised in acknowledgement of an era-defining success. His greatest moment.

I thought of his anguish at the realisation that the team he had created, the team he watched scale the dizziest peaks, needed to be broken up. Beneath the public profile, the wisecracks and the bravado, Shankly was essentially a man of principle. Values like honesty and loyalty meant more to him than any riches or rewards ever could. So, when the time came to dispense with those who had served him so well for so long, it was no surprise that he perhaps let sentiment cloud steely-eyed pragmatism. It may have no place in the hard-headed football world of today but as character flaws go, it’s not a bad one to be afflicted with.

I thought of how any doubts as to his ability to restore Liverpool to greatness were washed away like tears in rain, as the early 70s team of Keegan, Clemence, Toshack, Hughes and Heighway went on to surpass even the achievements of their predecessors. How, in delivering an unprecedented league title and UEFA Cup double, Shankly proved that he had the tactical acumen to outface any coach in Europe, a trait that his undoubted charisma and headline-friendly media image caused many to overlook.

I thought of his last stand, the clinically orchestrated pass-and-move procession that brought a tone-deaf Newcastle team to its knees at Wembley in 1974, Shankly wielding the conductor’s baton as if presenting the world with his final, most joyous symphony. And of how his deity-like status among Liverpool supporters was encapsulated by the sight of grown men falling at his feet on the Wembley turf, a symbol of gratitude, devotion and worship.

And, finally, I thought of his last years. How his retirement and subsequent exile had led to a strained relationship with the club he loved. How he sought refuge at Goodison and Old Trafford, at Sunday League mud-heaps and local parks. Anywhere he could watch football, talk football, play football. The enthusiasm, the passion for the game never left him. How could it? It was all he knew.

Bill Shankly never pretended to be something he was not. He never tried to cheat his way to victory, never abused his position and never gave anything less than his best. It was always, always more than good enough. He was the ultimate man of the people. He never forgot that the supporters were what made the club great.

Directors, managers, players come and go. The fans are always there. And he was the biggest fan of all. That’s why his bond with the Anfield faithful was unbreakable and why, to this day, he remains an icon to generations of Liverpool followers.

As the muffled voices fall silent, my mother’s tears are now my own, at first hidden, then flowing. One thought remains, a thought that will stay with me through years of triumph, tragedy, decline, rebirth and eternal expectation. There’ll never be another Shankly.

And there never was.

I’m all grown up now, with kids of my own. I’ve seen the understated genius of Bob Paisley take us to heights unimagined. I’ve seen Kenny Dalglish ascend to sainthood as both manager and man, cast unequivocally in Shankly’s own likeness. I’ve seen Gerard Houllier restore our pride and Rafa Benitez lead us back to the summit. Each, in their own way, building on the legacy that Shankly bequeathed. Each carrying on the work he started.

But I’ve never seen another Bill Shankly. And with the passing of 102 years since his birth, I’m more certain than ever that I never will.