Liverpool And Luis Suarez: Still Pining For A Love That Left Long Ago

LONG-form moaning seems to be out of fashion right now. As the traditional football fanzine has slowly died off and morphed into websites and podcasts such as this, there seems to be less of it about these days.

Rewind 20 years, even 10, and there was far more of it about in the world of the football fan. Even in the good times, supporters would take the time to pen a good old grumble and groan about the bad and the ugly of the beautiful game. We’re not talking 140 characters of bile on Twitter here. I mean lovely well thought-out nark – stuff that made you grab a cuppa, sit down and at the very least smile at the snarkiness of it all.

So, amid all the sunny declarations of long-awaited Liverpool title success on the horizon, a return to the good-old days, and day-glo kits complete with cringe worthy statements about lions that everyone seems to think are sound, I’d like to bring the genre of long-form moaning back for a day. Just for old times’ sake.

It might all be a bit Peter Griffin ‘Do you know what really grinds my gears?” but it’s been brewing for a while, this. And as soon as a friendly between Liverpool and Barcelona was announced, I knew the tipping point was in the post.

My beef is this: Luis Suarez, and more specifically the continued declarations of love from Liverpool fans and the fawning from the club over a player who left on July 16, 2014.

When, I wonder, did Liverpool become the ex that won’t let go? The partner that shows mates pictures and says, ‘I used to see her you know?’.

When big stars in the past departed, did Liverpool — club and fans — behave this way? Did we drool over Kevin Keegan in a Hamburg kit? Marvel at Graeme Souness banging them in for Sampdoria? Fist-bump mates when Rushie slotted one for Juventus?

In my lifetime and before, the mantra always was, and still should be, that no-one is bigger than the club. When it comes to Suarez, the idea seems to be getting lost. Do you support a player, or a club?

Stating the obvious here, but Luis Suarez left Liverpool two years ago of his own accord after a long goodbye that included a time when he was kept on Merseyside against his will — the failed attempt to engineer to a move to Arsenal, the interviews on international duty, the constant fluttering of eyelashes at Spain from all in the Luis camp; some seem happy to brush all that under the carpet and think only of the warmth of his many great strikes in a red shirt.

He’s a Barcelona player now. His connection to Liverpool is that he used to play for Liverpool. And that’s it, really. 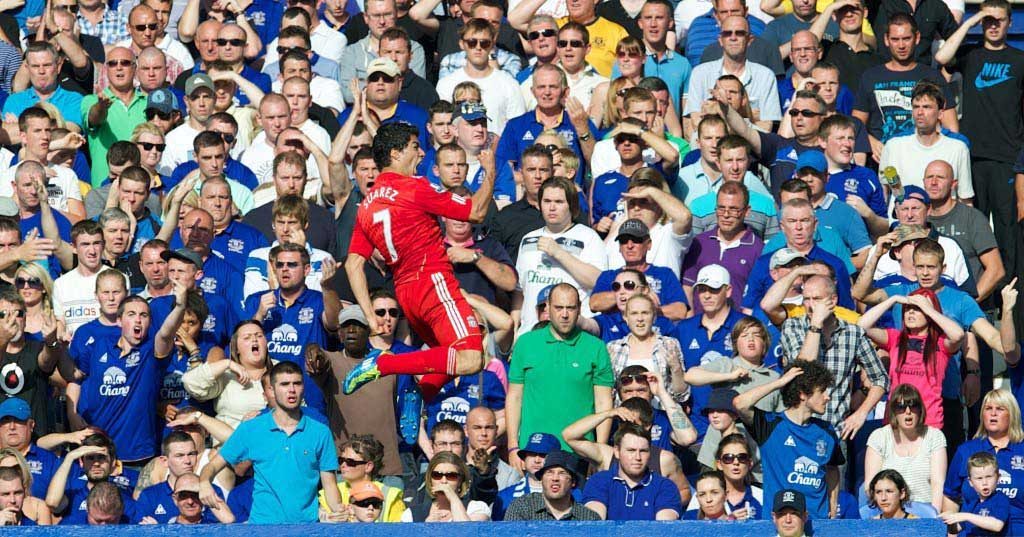 Yes, he was good. No, he was brilliant. Up there – ability wise – with the very best to have worn the red of Liverpool and with a built-in needle, an edge, that many who have come before and after so obviously lack.

Suarez played in 133 games and scored 82 goals for Liverpool. He won the League Cup in 2012. He scored unbelievable goals, displayed trickery most wouldn’t even attempt and he was the magic in a side that took us so close to the trophy we’d all love to see in the cabinet at Anfield.

We’ve all got our good memories of him.

But then he got off. Just like he wanted to. Liverpool were back in the Champions League but there was no second thoughts, no debate, no mixed emotions – it was goodbye Anfield, hello Nou Camp.

It’s also worth remembering that during his time at Liverpool, Suarez was found guilty of racially abusing Patrice Evra by an FA panel – something he disputed – resulting in an eight-match ban. Later, he refused to shake the then Manchester United player’s hand at Old Trafford despite promising the club he would do so — an action that dragged Kenny Dalglish under the bus with him as the embarrassing sideshow continued.

He bit Branislav Ivanovic, too, copping for a 10-match ban. And for good measure, while still on the books here, he munched on Giorgio Chiellini in the World Cup, resulting in the infamous excuse: “I lost my balance and ended up falling on my opponent. At that moment, my face hit the player leaving a small bruise and sharp pain in the teeth.”

He was player of the year with Liverpool, too. And rightly so. He made us sing, shout and stand in awe at his ability with the ball. But there were always two sides to the Suarez story.

With the three years at Liverpool now distant past, the money banked and spent (not particularly well), and Suarez going on to play 90-odd games and scoring 82 goals for Barcelona, I’m left scratching my head as to quite why he is offered the reverence he receives from Liverpool and its fans in 2016.

This worshipping stretches from the club fawning over him on social media to fans posting his goals for a different football club and adding the hashtag ‘#LFC’. Sorry, what? What has goals for a team in Spain got to do with Liverpool FC? I’ll tell you: Absolutely nothing.

I appreciate Suarez was – and is – an amazing footballer, and we haven’t seen his like at Liverpool since. But have we sunk so low that we have to try to claim some bizarre reflected glory from his achievements for another football club?

Do we need to have him visiting Melwood like he’s some kind of God doing us a favour, “catching up with former team-mates” and admitting “Liverpool are so important to me.” Does that need to feature prominently on the club website (like it did in March)?

Do the club need to be putting out tweets like this about Suarez at the weekend?

What’s great about it? Suarez has gone. He got what he wanted – his move to sunny Spain, to a club winning trophies. He’s mates with Liverpool players – understandable. But we don’t need to be boosting his personal brand any more. He’s not ours.

I’d rather now the club focused on the players we have on the books, and on getting better players in. In a world obsessed by messages and PR, what does Liverpool’s pally act with Suarez say? We had a good player once. He left. But that’s OK. We still love him. He’s welcome anytime. We wish he’d come back because we don’t have better. It all feels a bit small time.

Forget Suarez. He’s not coming back to Merseyside for anything more than a PR jaunt anytime soon, so let’s whack the shutters up, get ruthless and say thanks but no thanks. Melwood is a place to train current Liverpool players to win games. If we play against his club, sound, let’s, like we did on Saturday, give them a good thrashing.

Suarez deserves a polite applause at best. An acknowledgment of the good times. Nice one, the good times were good. But you’re an ex. You’re in bed with Barcelona. It’s a nod and a raise of the eyebrows if we pass in the street at best, rather than hugs, selfies and social media updates about the belter we once bagged.

I don’t want Liverpool bowing at the altar of Suarez or Barca, I want Liverpool thinking big and acting big. We’ve got a proud record against Barcelona. Let’s talk about that. Let’s aim to get back up there and bettering it, adding to it – a third win at the Nou Camp sometime soon? Make us dream.

Standing ovation as Luis Suarez is subbed off, which is then loudly followed by the 'Just Can't Get Enough' chant#LFC #FCB

If you listen to the free shows and are wondering whether to subscribe, here is one of our old subscriber shows that we’ve put out for free – an in-depth chat with Jamie Carragher on defending: