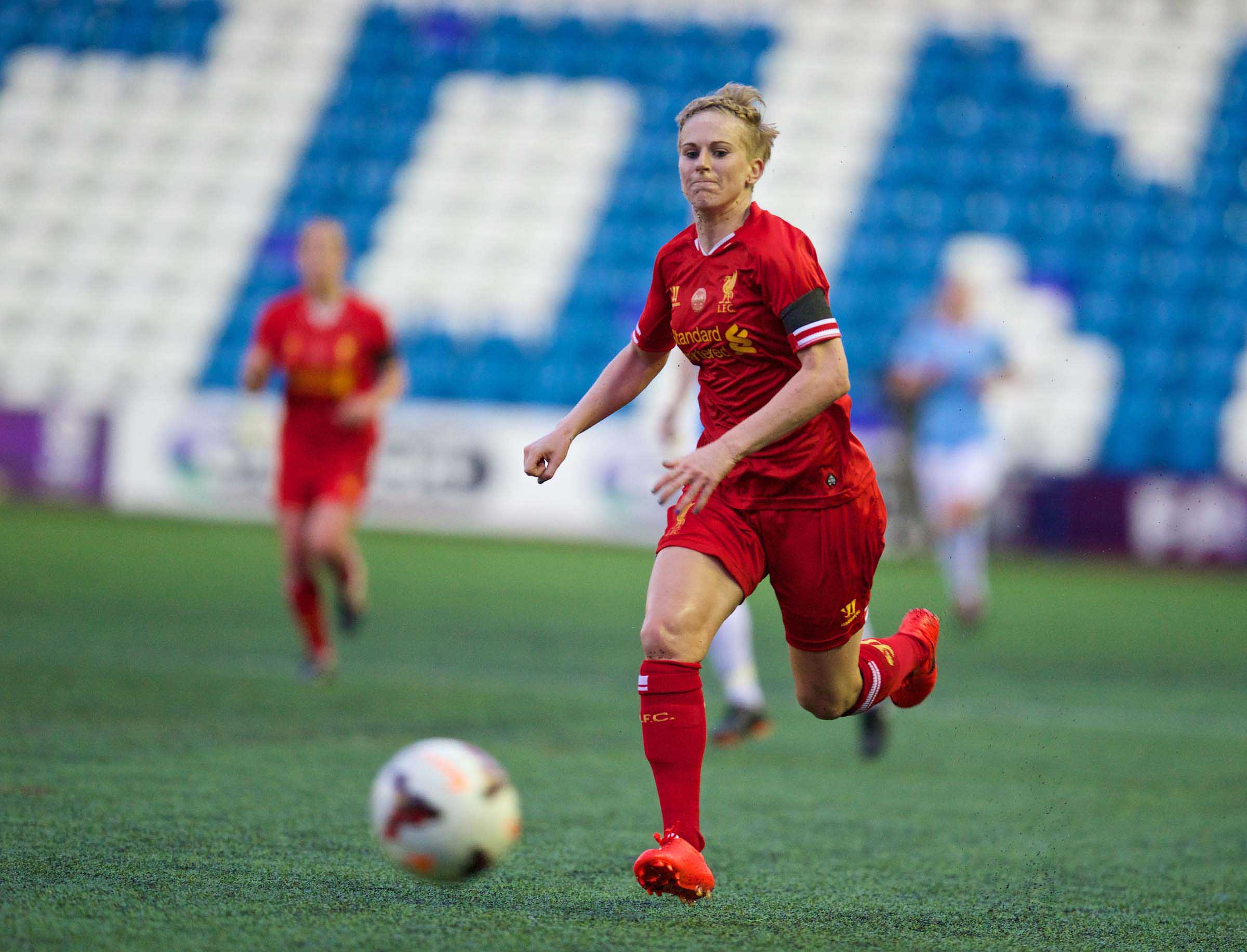 LIVERPOOL Ladies secured 3 points with 3 goals in a Continental Cup tie away at Doncaster Belles on Thursday night; Natasha Dowie opened the scoring before both Lucy Staniforth and Ashley Hodson netted their first Liverpool goals either side of half-time to complete the win.

The Reds lined up in a 3-4-3 formation using a trio of Gemma Bonner, Becky Easton and Corina Schroder in defence ahead of Libby Stout in goal. Staniforth partnered Katrin Omarsdottir in central midfield with Mayumi Pacheco on the left and Ingrid Ryland on the right; Dowie, Rosie White and Kate Longhurst played as an interchanging 3 up front.

Liverpool were left bitterly disappointed following a 1-0 league defeat away at the weekend and from the opening whistle at the Keepmoat Stadium looked far more dangerous going forward – with Pacheco and Ryland getting forward down the wings at every opportunity.

They did suffer a couple of early scares in the opening 10 minutes, Sue Smith skipping past a couple of red shirts to swing a cross towards the back post which was headed away by Pacheco but sent back in for Staniforth to chase – Bonner’s clearance ricocheting back off the midfielder but luckily for Liverpool Libby Stout reacted quickly.

Bonner also cleared from another cross sent in from the left, after Easton had matched the run well, and Easton produced one of her trademark sliding tackles to prevent a strike.

At the other end of the field the Doncaster defence were struggling to handle Dowie, White and Longhurst, who were seemingly taking it in turns to drop back and link the midfield to the attack while switching positions amongst themselves up front. At one point Rosie White going central, before moving out left for Dowie to move back in the middle. 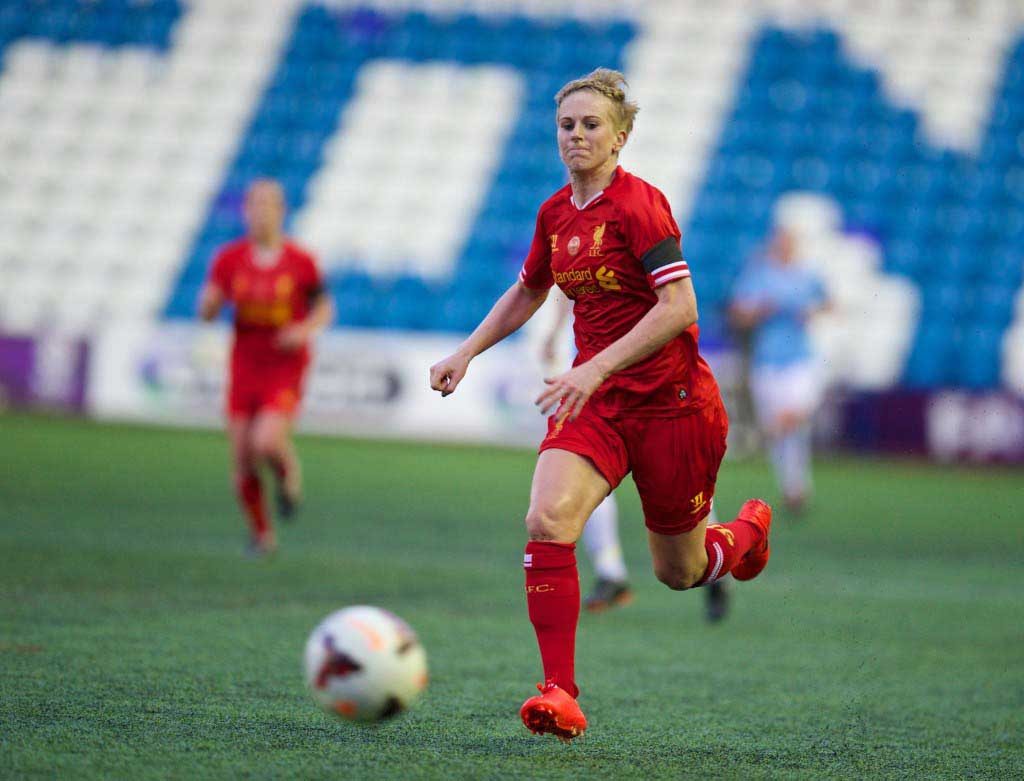 The trio were also getting into dangerous positions in the 18-yard box, perfectly poised to capitalise on the service provided by each other and Ryland and Pacheco out wide. The first Liverpool chance coming when a Ryland cross skimmed the edge of the 6-yard box and narrowly missed Longhurst and Dowie.

Dowie scored both goals in the Cup win against Everton last week and was back to her best once again this evening forcing a good save out of Nicola Hobbs, the no.9 creeping closer to opening the scoring with each passing minute.

Liverpool took the lead in the 13th minute, Dowie finishing well across Hobbs just inside the box after being set up by White – the whole play coming from a free kick won by Staniforth midway inside the Liverpool half.

10 minutes later it really should have been 2, Kate Longhurst’s cross from the byline somehow missing Katrin Omarsdottir and falling to Pacheco; Pacheco crossed back in from the left only for her ball to be cleared as far as Corina Schroder who fired over the crossbar.

It would soon be 2-0 however, Lucy Staniforth bagging a well-deserved goal after swinging the ball straight through the arms of Hobbs from the corner. The strike being her first in the red of Liverpool.

The visitors enjoyed the majority of possession for the rest of the half, the only notable Doncaster attack coming when Bethany England’s cross was superbly touched onto the crossbar by Libby Stout, the ball falling between Stout and the incoming Courtney Sweetman-Kirk but Stout quickly gathered the ball.

Doncaster were beaten by Manchester City in their previous Continental Cup tie and the way the competition is set out – 5 games played in a group stage, with only the top 2 teams in each group of 3 guaranteed a place in the quarter-finals – 2 defeats in the opening games can be damning. As such, Doncaster came out fighting in the second-half.

Twice Libby Stout bravely came off her line and required treatment after clashing with the Belles forward, while Becky Easton was also clattered on a couple of occasions.

Liverpool refused to let their lead slip, Gemma Bonner in particular a colossus in the back line and resisting each Doncaster attack – aided by Easton and Schroder as the Reds defence recorded their second clean sheet of the year.

Schroder was making just her first start this half of the season, returning from injury and was replaced by Ashley Hodson as Liverpool made their first substitution; a forward on for a defender signalling a change in formation to a flat back four. 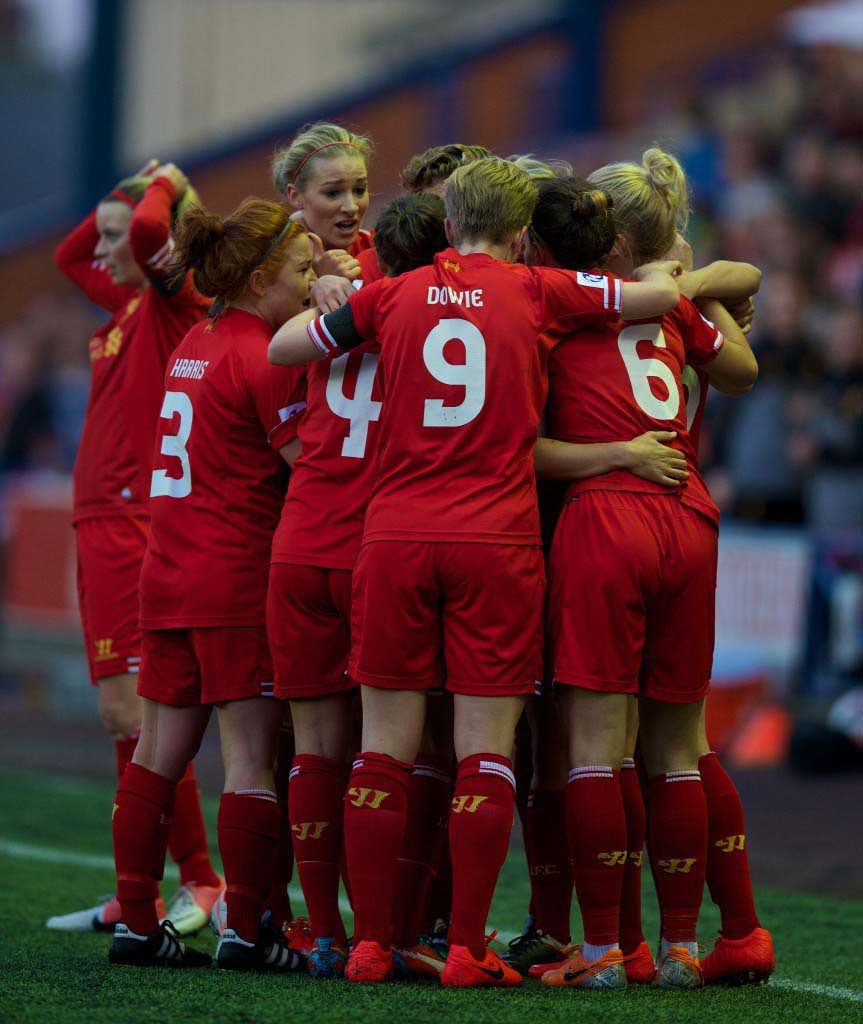 Hodson herself is returning from a knee injury that prevented her from appearing prior to the mid-season break, since starting the first game back at Arsenal the young striker has made 2 influential substitute appearances.

Although Doncaster were making attempts to get back in the game, Liverpool continued to pass the ball well with Staniforth in particular a highlight playing box-to-box, helping out both in defence and attack and linking well with White – White’s back heel almost picked up by Staniforth at the edge of the area, who regained possession to nutmeg the defender but was unable to get a shot in.

Liverpool had the ball in the back of the net after a wonderful passing move kick-started by Staniforth; the midfielder shielding the ball back into the path of Bonner who sent it long, the ball coming out to Zelem on the left wing and Hodson converting her cross but the linesman had his flag raised for offside.

It would be Hodson who would complete the evening’s scoring, her low strike from 18-yards out taking a slight defection from the defender but unmistakably her goal – her first for the first team after netting an impressive 16 in 9 development appearances last season.

Into injury time, both Dowie – unlucky earlier in the half not to score a second after beating several yellow shirts on a great run – and Longhurst saw efforts to make it 4-0 blocked, while White shot over the crossbar. The game finishing 3-0 to Liverpool, who remain second in their Continental Cup group to Manchester City on goal difference.

Liverpool have a short break before their next game, returning to league action away against league leaders Sunderland Ladies next Saturday 8th August.

Player of the Match Lucy Staniforth