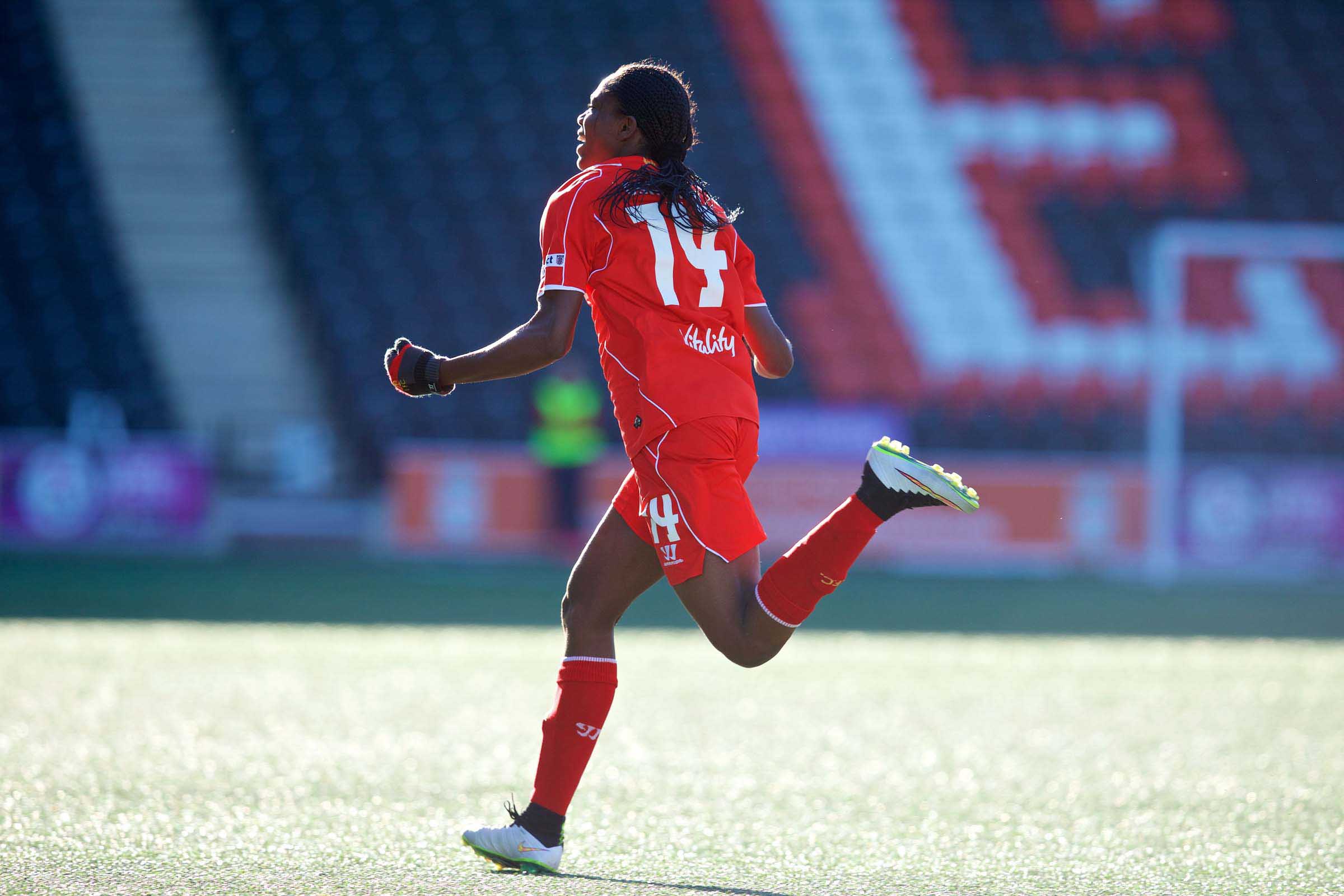 LIVERPOOL Ladies picked up an important three points last night as they beat Manchester City 2-1 with goals either side of half-time from Asisat Oshoala and Line Smorsgard.

Matt Beard named an unchanged 11 from the side that lost away to Chelsea Ladies last weekend; Libby Stout starting in goal, captain Gemma Bonner and Satara Murray ahead of her in central defence, Martha Harris at right-back and Corina Schroder on the left.

Becky Easton remained stationed in front of the back four with Kate Longhurst partnering Fara Williams in midfield, Oshoala out on the right wing, Smorsgard on the left and Natasha Dowie up front.

Manchester City made a number of signings during the winter off-season, with Liverpool’s Lucy Bronze making the switch to City along with Bristol Academy’s Natasha Harding, Sarah Wiltshire from Yeovil and Nikita Parris on loan from Everton Ladies. Three of those new signings started here with Wiltshire on the bench along with City club captain Steph Houghton and No.1 Karen Bardsley, who reportedly was injured despite being a named substitute.

The Reds have enjoyed an upturn in form since beginning the year with back-to-back defeats, the change in formation with Easton deployed in defensive midfield making a huge difference to Liverpool’s fortunes.

City got the game underway, immediately looking to press the Liverpool defence high up the pitch with Murray twice seeing the ball back to Stout when faced with the danger of a lurking Nikita Parris.

The first chance of the game came when a foul was given against Oshoala with City sending a low free kick into the arms of Stout.

Both teams were playing at a high tempo, with Liverpool never really allowing their visitors to settle and dominating the possession. The Reds were unlucky with an early offside decision, a well-timed Dowie run inexplicably flagged by the linesman with television replays proving the striker was indeed onside.

The Reds didn’t have to wait long to open the scoring though. After Williams’ free kick was deflected out for a corner, Williams stepped up to take the set piece; the corner swinging to the back post, through the arms of City goalkeeper Alex Brooks and prodded over the line by Oshoala to give Liverpool a ninth-minute lead.

Liverpool continued to attack and defend well for the rest of the first half, Schroder blocking a Natasha Harding cross and Longhurst effectively dealing with Lucy Bronze’s forward runs from right-back. 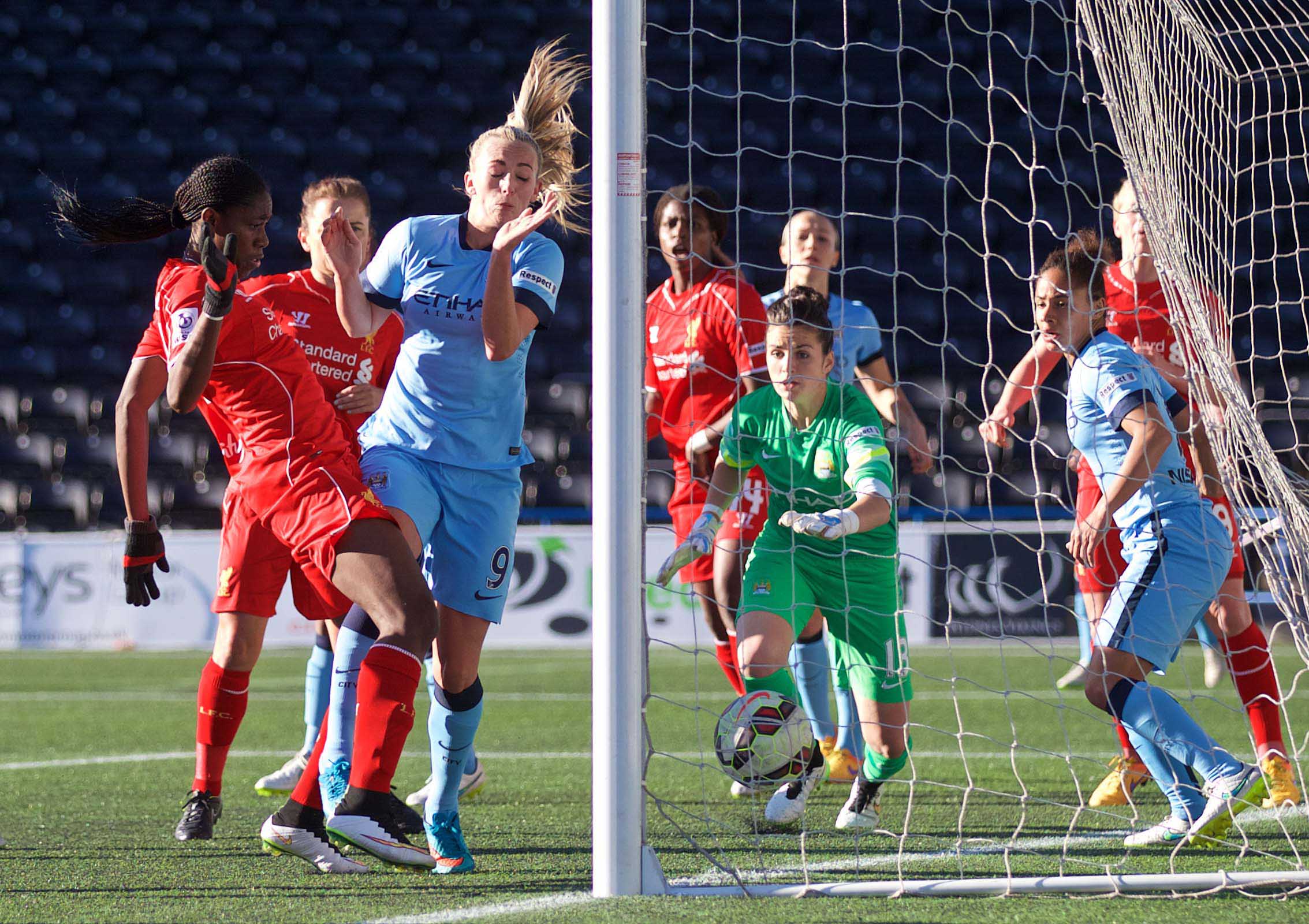 Oshoala, brimming with confidence, tried a series of charging runs and flicks over defenders; one particular run all the way to the touchline saw the Nigerian star attempt to cut a low ball up to Dowie. The cross was intercepted, falling to Smorsgard who teed up Harris but her cross was a touch heavy.

Bonner and Murray’s partnership at the back continues to grow, the pair combining to close down Parris at the edge of the area before she could unleash a strike and also dealing well with both Parris and Toni Duggan throughout the 90 minutes.

As the first half drew to a close, Dowie had a shot blocked just minutes after excellently keeping the ball in play at the touchline with the Reds probing in and around the 18-yard box but unable to find the final killer pass to produce a second goal before the half-time whistle went.

The second half continued much the same way as the first, Parris hitting the side netting with the first attack of the half with Stout getting a touch. Oshoala cleared from the ensuing corner, picking the ball up again on the halfway line and eventually fouled 30 yards out. Williams stood up to take the free kick but sent it too close to the keeper.

Easton was once again a brick wall in the second half, proving the perfect cover for the commanding Bonner and twice standing strong at the edge of the area to halt the City attack. 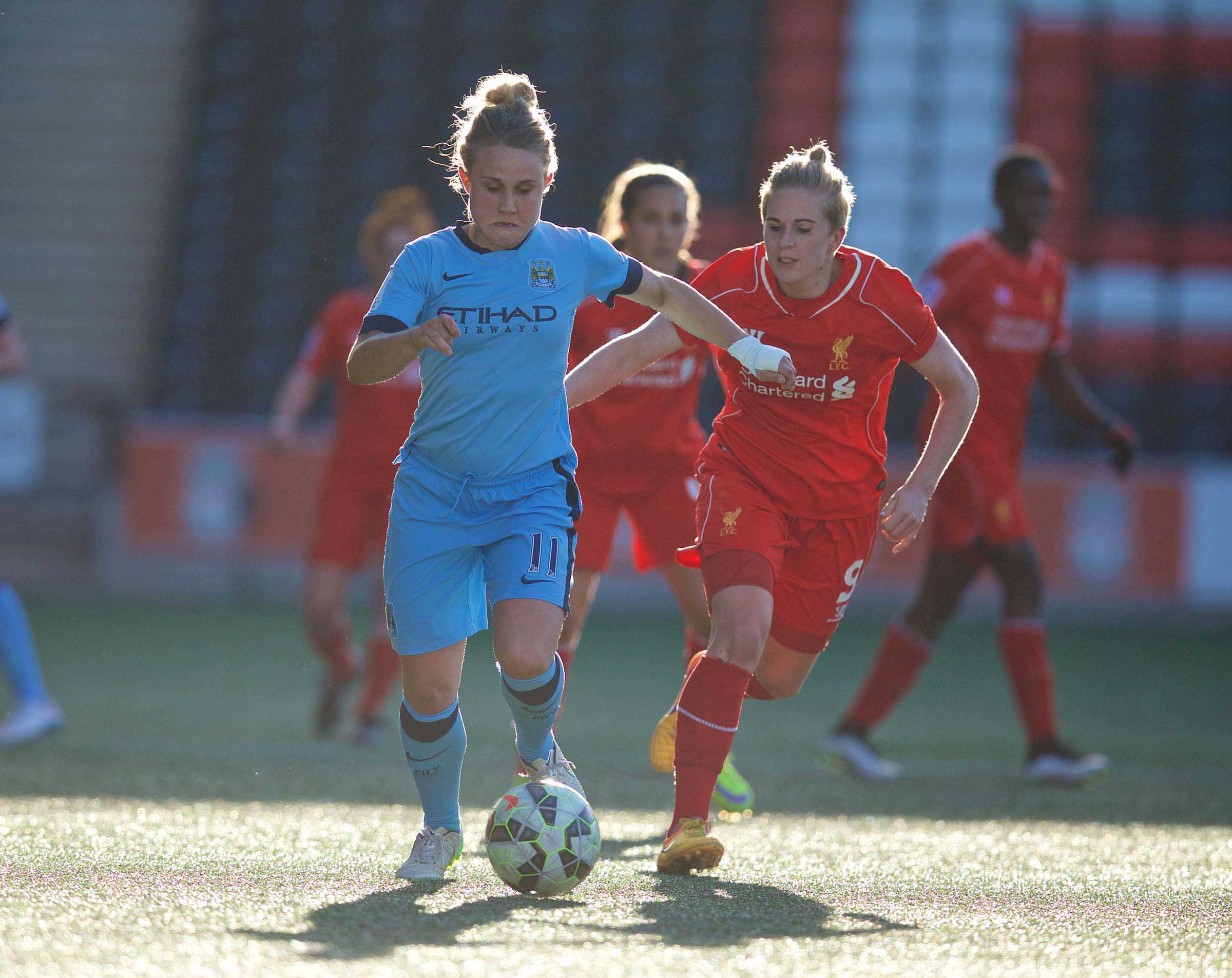 Man City drew level after Murray was judged to have fouled Harding — the free kick headed past Stout by Parris for the equaliser. City almost took the lead seconds later when Duggan chested the ball into the path of Izzy Christianson but her strike blazed over the crossbar.

The lead was to be extremely short lived however, the next Liverpool attack producing the game’s winning goal. Harris’s throw reached Dowie in the penalty area, Dowie knocking the ball to Oshoala and her first-time cross headed over by Smorsgard.

That was the Norwegian’s first goal for Liverpool and she almost doubled her tally minutes later before being replaced by Nicole Rolser.

Ingrid Ryland was also a second-half substitute, along with Katrin Omarsdottir, making her first appearance this year. They replaced Schroder and Longhurst respectively.

Liverpool had a number of chances to extend their lead, a Williams free kick was spilled by Brooks but the keeper recovered well to block both Dowie’s and Oshoala’s rebound attempts.

Oshoala also continues to build a good on-pitch relationship with Williams; the England midfielder looping the ball to Oshoala, who had her back to goal and headed back to the feet of Williams before the final strike was held on to by Brooks.

Dowie had the final clear-cut chance of the evening for Liverpool after good work on the left wing before she cut in to shoot with her right foot. The keeper got across to save and the game finished 2-1 to Liverpool.

The win lifts the Reds to third in the league and they now have two weeks to prepare for the final game before the Women’s Super League breaks for the World Cup with a trip away to Notts County on Sunday, May 10.

PLAYER OF THE MATCH: Gemma Bonner