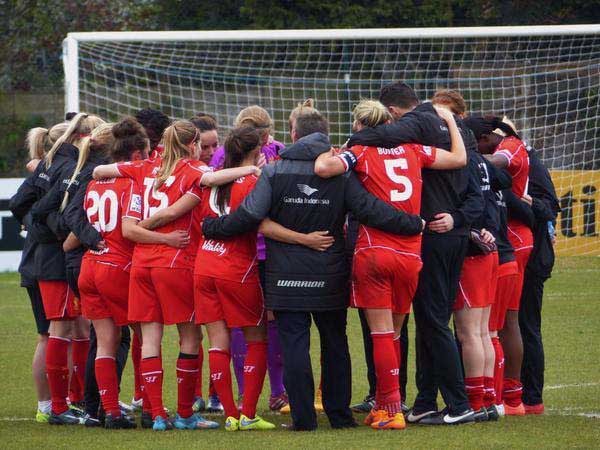 DESPITE giving their all throughout the 90 minutes, Liverpool Ladies fell to a 1-0 defeat away at Chelsea Ladies.

PFA Player of the Year nominee Eni Aluko scored the only goal of the game after audaciously chipping the ball over Libby Stout. Fara Williams had the chance to equalise for the Reds after Aluko handballed in the penalty area, but her spot kick hit the post.

Liverpool were unchanged from the side that beat Birmingham City at the beginning of the month with Stout in goal behind a back four of Martha Harris, captain Gemma Bonner, Satara Murray and Corina Schroder from right to left.

Becky Easton retained her place in defensive midfield, Kate Longhurst partnering Fara Williams in the centre of midfield just ahead of her, Asisat Oshoala on the right, Line Smorsgard on the left and Natasha Dowie up front.

The Reds had just four substitutes on the bench with Katrin Omarsdottir with the Development Squad back on Merseyside and scoring in their 8-0 win. Nicole Rolser was also missing from the matchday squad, despite travelling with the team.

During an end-to-end first half Liverpool defended well against a Chelsea side that had scored 14 goals in their previous four games. The home side twice attempted to mount attacks down the right wing but Schroder and Smorsgard combined well with Smorsgard in particular impressing to get back and cover.

Harris also dealt well with an early Gemma Davison run, getting across to halt the former Liverpool winger in her tracks. As a whole Liverpool dealt well with the threat of Davison, who has had an excellent start to her career at Chelsea, and breaking up the partnership between her and Eni Aluko proved crucial to holding the Blues off during the early stages of the game.

Chelsea’s Player of the Year Ji So-Yun was also effectively held by Bonner, the Reds captain doing brilliantly to clear from the South Korean after she had beaten both Murray and Stout. Late in the first half Bonner also made a well-timed sliding challenge in the box to deny So-Yun the opportunity to shoot.

Liverpool arguably were the better side of the first half, creating the more clear-cut chances and forcing no fewer than five corners. Williams’ set pieces targeted the back post with Bonner on the end of two of the deliveries; one header over the crossbar and the other headed goalwards only for the referee to blow for a foul in the box.

Oshoala once again impressed in a red shirt, making a number of forward runs, beating the defender on one but Chelsea goalkeeper Hedvig Lindahl intercepting. Oshoala also did well early on, winning a throw in by the corner flag from which  Dowie forced a corner, and on the stroke of half-time almost broke through the Chelsea defence again only to be flagged for offside in what must have been an extremely tight decision.

As strong as Harris has been in defence of late, the young full-back has also been getting into good positions further up the pitch. A lovely cutting ball midway through the first half skimming past everyone in the 18-yard box and unfortunate that there was no red shirt to connect with it.

With the teams back out for the second half, the game continued much the same way as the first 45. A Chelsea strike went wide of the post before minutes later Bonner’s free kick was almost flicked into the path of Smorsgard by Dowie.

Dowie also made a great run down the left wing, passing the ball around the right-back, picking it up and cutting a pass back to Longhurst who hit a first time pass quickly towards Dowie, but the Liverpool no.9 couldn’t get back to pick it up.

The home side then took the lead. After building up the play patiently in midfield, Laura Coombs set up Eni Aluko to chip the ball over Stout. Aluko looked to have injured herself celebrating, remaining off the pitch for several minutes afterwards.

Liverpool almost replied immediately as Oshoala set off on yet another strong run into the 18-yard box. Her charge was matched the whole way by Chelsea defender Claire Rafferty, who forced the Nigerian to shoot from a tight angle and the strike went inches wide.

Liverpool began to enjoy their most dominant spell of the game, Bonner winning the ball from Ji So-Yun midway in the Liverpool half and playing a long ball forwards for Dowie. 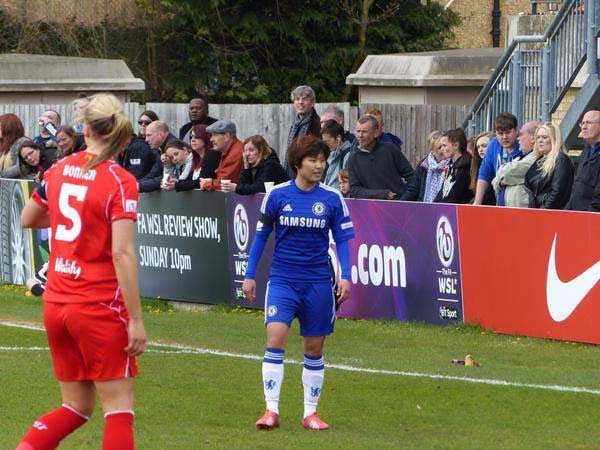 Oshoala won the Reds their sixth corner of the game, this being cleared only as far as Harris. Harris knocked the ball back to Bonner before Liverpool were awarded a free kick 25 yards out.

Williams stepped up, her strike blocked by the hand of Eni Aluko with the referee correctly pointing to the penalty spot. Williams sent Lindahl the wrong way but the spot kick bounced back off the post and Chelsea were able to clear their lines.

Liverpool refused to give up the search for an equaliser though. Williams and Oshoala seem to be building a good understanding with the latter almost picking out the former with a cross moments before Williams’s through ball to Oshoala resulted in an collision on the edge of the box.

Matt Beard used all three of his outfield substitutes during the final 15 minutes, Ingrid Ryland coming on for Schroder meaning Harris switched to left back. Lucy Staniforth also replaced Smorsgard and Longhurst came off for Katie Zelem.

In the closing stages Chelsea tried their best to keep the ball at the corner flag, with Liverpool continuing to press and throwing everybody forward — a Dowie cross almost reaching Harris and Staniforth also almost finding Harris after a lovely turn and flick, keeping the ball in and playing it short to the full-back.

As Bonner tried to kick start one final Liverpool attack, Gemma Davison closed her down, the ball going out of play and the referee blowing for full-time to leave the Reds disappointed at not claiming at least a point.

Liverpool Ladies’ next game is on Sunday, April 26, 6pm kick off at the Select Security Stadium, Widnes.

PLAYER OF THE MATCH: Gemma Bonner