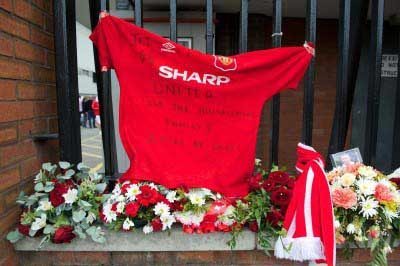 LIVERPOOL, ENGLAND – Sunday, September 23, 2012: A Manchester United shirt with a tribute for the 96 victims of the Hillsborough Stadium Disaster left on the gates of Anfield before the Premiership match between Liverpool and Manchester United. The release of the Hillsborough Independent Panel’s report shed light on one of the biggest cover-up’s in British history which sought to deflect blame from the Police onto the Liverpool supporters. (Pic by David Rawcliffe/Propaganda)