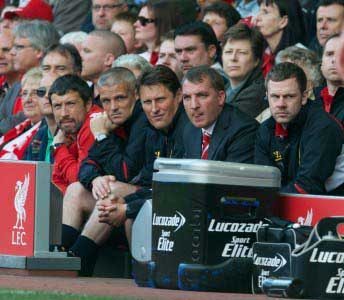 LIVERPOOL, ENGLAND – Sunday, May 19, 2013: Liverpool’s manager Brendan Rodgers on the bench with assistant manager Colin Pascoe, Under-18s coach Mike Marsh and head of fitness and science Ryland Morgans during the final Premiership match of the 2012/13 season against Queens Park Rangers at Anfield. (Pic by David Rawcliffe/Propaganda)