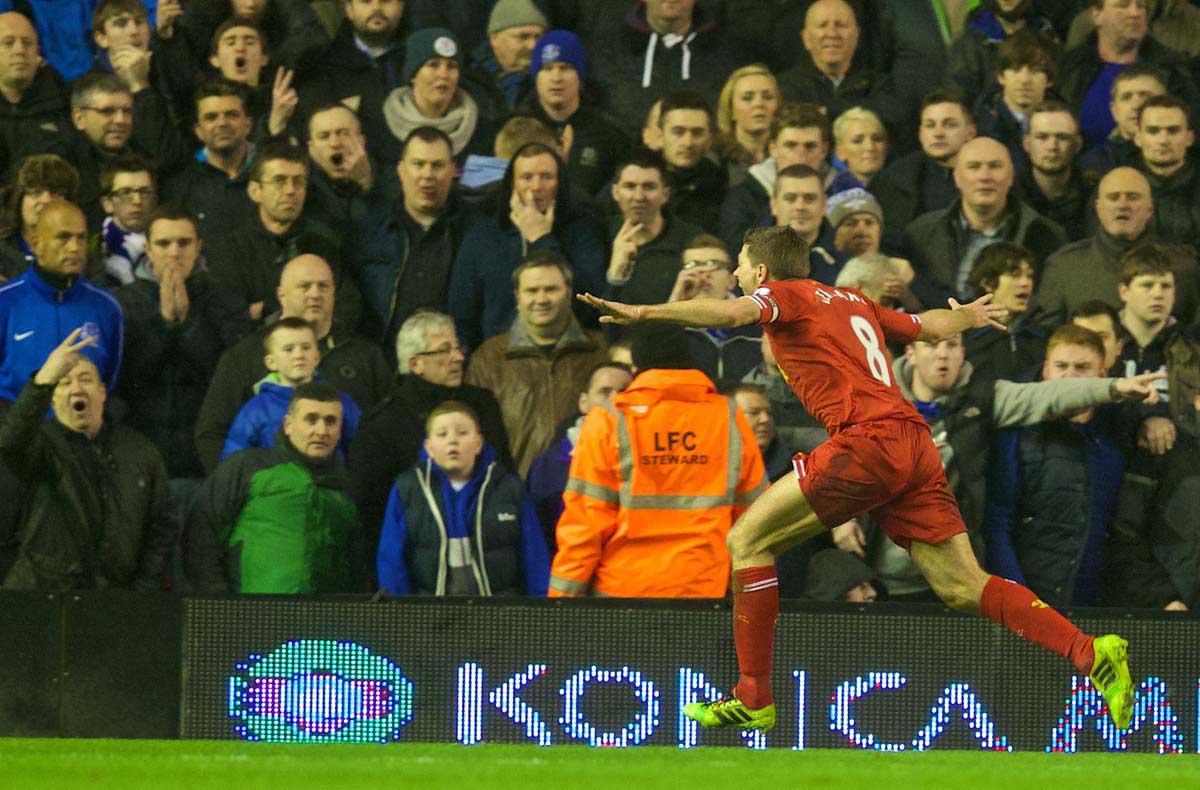 STEVEN Gerrard has scored 10 goals for Liverpool against Everton, second only to Ian Rush with 135. He’s also scored five and assisted two in the last six derbies, which should be taken into account when discussing whether he is better starting in the team or on the bench. But even this only tells half their story. He’s kicked them and stomped on them and broke their hearts, cupping his ears whilst doing it.

When I’m not thinking about girls or music or Robbie Fowler, I’m thinking about Steven Gerrard against Everton. We’ve all got our favourite moments. But I’m writing the article. So in his last Merseyside derby until we draw them in the UEFA cup here are my 5 favourites, in reverse order.

The derby known for Robbie Fowler sniffing the line and Steven Gerrard’s cameo. At the time I don’t think many in the crowd would have known he would go on to become the best attacking midfielder in the world. Right then he was just some mad kid from Huyton running round kicking everyone. His greatest moment was an interception ahead of Kevin Campbell when Sander Westerveld had got off, before a match saving clearance off the line. Fast forward to the end if you don’t want reminders of Paul Ince playing for Liverpool.

The derby when Gerrard got sent off and we won anyway. This might seem a strange choice given the subject title but it’s one of my favourite Gerrard memories because it perfectly captures a period where Evetonians seemed to hate and fear Gerrard more than they loved their own club. They went ballistic when Gerrard got sent off. Like they’d just won the World Cup and found out the Dallas Cowboys Cheerleaders were waiting for them when they got home. Then we won anyway. Because Everton are fucking rubbish. Here’s Phil Neville in that game heading it into his own goal.

It is strange to think, considering what came during the game and after, that many reds went into this game less than confident. Liverpool had recently been less than convincing at Bournemouth and rubbish at home to Aston Villa. Everton had players back from injury and were approaching something resembling cocky. The first twenty minutes were actually fairly even before, in the most Everton 10 seconds ever, they managed to concede a Gerrard goal from a Suarez corner in front of their own fans who had just been pelting Suarez with coins, whilst their midfielder fell on top of their striker injuring him for weeks. Well in lads. I’m still a bit fuming we never scored eight that day though.

I watched this in Tenerife in one of those bars where they decide to put the English radio commentary on even though it’s about 5 seconds ahead of the screen you are watching. Thus when I heard John Arne Riise score on the commentary he was still on the half way line on the screen, and I got to see exactly how he scored that goal. But before all that Kevin Campbell had opened the scoring before Gerrard equalised, dancing past some yard dog and smashing a thunderbolt into the far corner. You remember it. Then he ran the whole length of the pitch cupping his ears, guaranteeing him years and years of songs about his kids. Arsed.

In a league campaign with little to write home about, Liverpool still managed to wallop the blues at home with a hat-trick from the captain. The first was probably the pick, a lovely cool finish over a score of Everton defenders after a loose ball arrived at his feet. The second, classic ‘best player in school’ stuff as he shoves everyone out the way and kicks it dead hard in the goal. Then an Everton player falls over trying to control the football and he runs up the pitch and scores a third. I miss Kenny’s celebrations on the sidelines. I miss David Moyes a bit too. 10 more years we sang at him that night. Poor lad looked devoed.