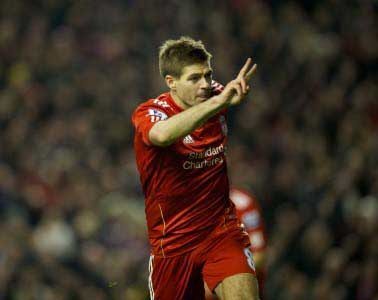 LIVERPOOL, ENGLAND – Tuesday, March 13, 2012: Liverpool’s captain Steven Gerrard celebrates scoring the second of his hat-trick of goals against Everton on his 400th Premier Leagie appearance during the Premiership match at Anfield. Liverpool won 3-0 and Gerrard became the first player since Ian Rush in 1982 to score a hat-trick in a Merseyside Derby. (Pic by David Rawcliffe/Propaganda)