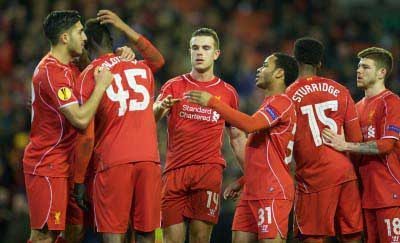 LIVERPOOL, ENGLAND – Thursday, February 19, 2015: Liverpool’s captain Jordan Henderson shakes hands with Mario Balotelli as he celebrates scoring the winning goal against Besiktas JK from the penalty spot during the UEFA Europa League Round of 32 1st Leg match at Anfield. (Pic by David Rawcliffe/Propaganda)