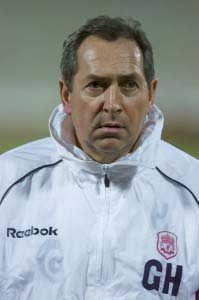 ATHENS, GREECE – Wednesday, November 22, 2000: Liverpool’s manager Gerard Houllier during a training session at the Olympic Stadium in Athens, ahead of their UEFA Cup 3rd round, 1st leg clash with Olympiakos. (Pic by David Rawcliffe/Propaganda)