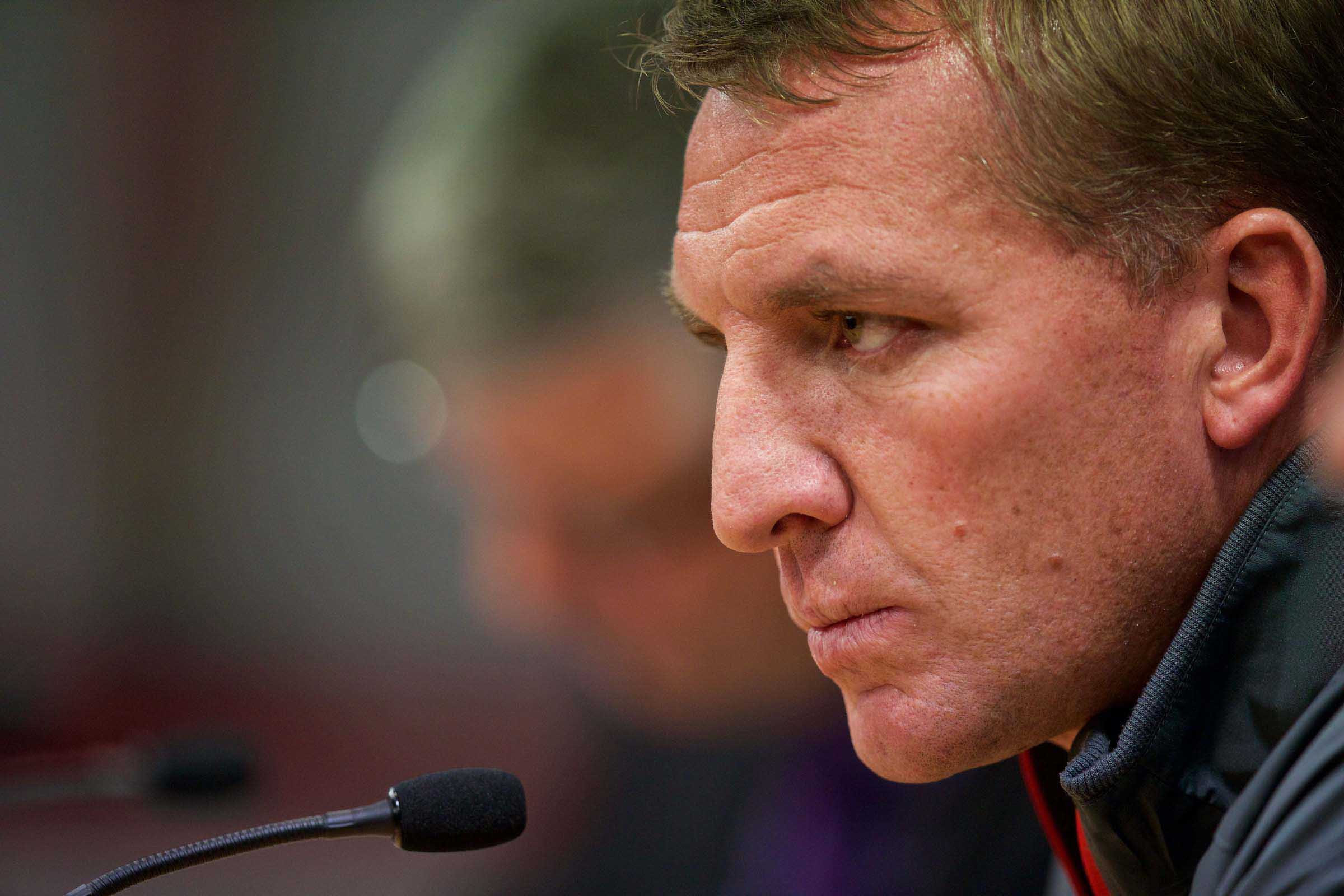 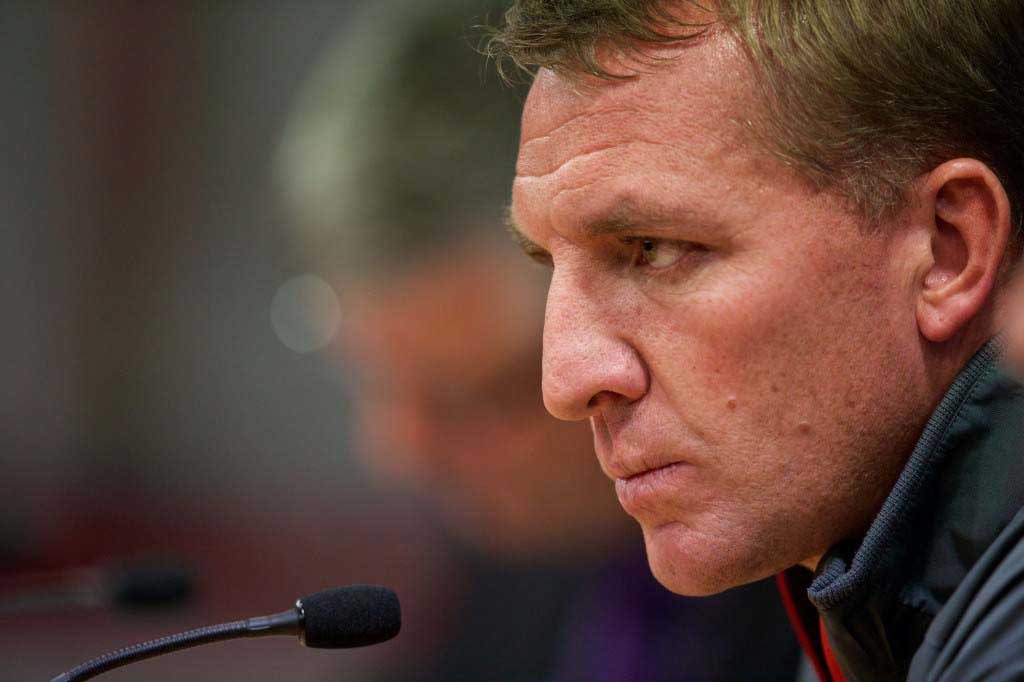 UNDER PRESSURE? It hasn’t gone to plan so far this season for Brendan Rodgers

OURS is a club of extremes. We’re either in or out, up or down, black or white. The middle path is the one least travelled. We sway from the darkest cynicism to checking out next May’s Berlin hotel availability an hour after we’ve just been gubbed by Real Madrid. We like to stay on the edges and camp out. Positive or negative: we take our position and stay there.

This has been perfectly illustrated since August. For some, we’ve got a chance of getting through the Champions’ League group and are sitting in the pack just outside the top four ready to strike. For others, we’ve blown the good work of last year, won’t get anywhere near the Promised Land and will be back where we were in the first place (but definitely not *in* first place).

I’d like to plead the value of the middle ground.

Year three hasn’t started well. It really hasn’t. The meek defeats to West Ham and Villa, the shambolic start to the Champions League and a game where we were bullied by septuagenarian Bobby Zamora have all eclipsed the joy of White Hart Lane. In the expectation stakes, Brendan isn’t having a good time and this is where he has to earn his corn.  Year one was a journey for the word ‘progress’ with it’s awful start and its promising ending, while year two was a veritable rollercoaster of joy and heartache. This season is so, so different.

And this is where any analysis is judged by the extremities of any agenda. It’s fine to say this season has not begun well. Tottenham and maybe the Derby have shown that we can do better but this is a slump – not a terrible one, not one worthy of questioning the manager’s position or anything stupid like that, but one worthy of comment.

And you know what? It’s alright to say that. Sometimes you just have to deal with what’s around you and build from it. It doesn’t mean that you are elated to be doing so purely because you can’t warm to  Brendan’s dogma, nor does it make you a head-in-the-sand optimist who writes ‘YNWA’ at the end of every sentence to prove authenticity. It’s okay to look at Liverpool in laboratory conditions without external stimuli colouring the issues.

GET REAL: The Kop shows its support before the match with Real Madrid at Anfield

A friend of mine recently said, while assessing this season and last: “After how close we went last season and with the money we’ve spent, we should be streets ahead by now.” That’s an illuminating remark as it suggests that the majority of the work was done last season and that this one should be a breeze. It doesn’t work like that. Football, like a shark, is always moving. The Greek philosopher Heraclitus once said: “Everything changes and nothing remains still …  you cannot step twice into the same stream.”

This season isn’t last season in the same way that stream isn’t the same one you were in 10 minutes ago as that water has moved on. Alright, Heraclitus probably wasn’t thinking about Brendan’s tricky third album back then but he had a point. We were never going to just pick up from where we left off and take the League by storm as a matter of entitlement. True, we’d be better prepared for it than we’d been in previous seasons but you can’t just hope it’ll get us through.

Much of this slight decline is to do with Suarez obviously, as replacing one of the best strikers in the world when none of his peers are available is tricky at best, but there are other factors. Chelsea, for example. Jose Mourinho bought Costa and Fabregas – two fantastic players that have stepped straight into the first team and taken the league by storm. We, through no fault of our own, haven’t had that luxury. Instead, we’ve had Markovic (not used to the Premier League), Lallana (not fit), Can (injured), Lovren (there is no soundbite available – more of a treatise), and an over-eager yet misfiring Ricky Lambert and…and…well…

Ah, Mario. All Liverpool match reports lead back to you.

There are more extremities here than in any other player since, well, the last one. Balotelli hasn’t started well but did anyone really expect him to given the Sturridge injuries? He’s a support player to the main striker or needs a support striker when it’s his turn. He needs Daniel Sturridge up front with him. This poses the question ‘Is Liverpool’s season record based on Daniel’s fitness?’ because, if it is, we’ve had it.

I like Mario. I think he’s got something, and I like strikers who shoot the first chance they get. The trouble is, he hasn’t had that much of a chance and those he’s had he’s ballooned over the bar (Everton and QPR) thanks to the urge to break the net. I thought he was okay against Real Madrid and liked how he seemed to stay close enough to Raheem to help out but come the end of the first half the narrative had already been written and hilarious ‘banter’ knobheads like Paddy Power were lolling and lolling. (You’ve never been funny, lads. Not once).

Madrid became Mario’s fault. I mean, alright, we’d kept one clean sheet in 18 games, had played the best side in the world and showed little fight after the first goal whether he was either on the pitch or not, but somehow him swapping a shirt 10 metres away from the designated shirt-swapping zone had  cost us victory. Little was made of silent centre backs and Mignolet once again trying to stop the ball with his face rather than with his hands but there are no headlines or agenda to be attached to there.

Not that I’m defending him. He doesn’t get around anything like he should and his body language is Torres-esque but I think it will come. He just needs someone with him. Strikers feed off scraps and there aren’t any if you’re up there on your own. Mind you, running around a bit might help. Just a thought.

The strangest thing about the whole Balotelli issue is why we bought him in the first place. There doesn’t seem to be much logic to it. If Adam Lallana is your chief signing — a man who relies on intricate play and delivering through balls — why bring in a target man who is more Emile Heskey than Michael Owen? True, variety is key and this Liverpool side need to find new ways to win rather than relying on one overall ‘philosophy’ but it’s an extraordinary choice. We don’t play with touchline-hugging wingers, nor do we lump it big from the back for knockdowns to a second striker. We haven’t got a second striker! Maybe it wasn’t Brendan’s doing? Maybe the transfer committee just shoved him at the manager and said “There’s your Suarez” when he’s anything but. Maybe.

This is highlighted more than ever thanks to the paucity of striking options. Lambert wants to do well but he too hasn’t managed a goal yet, and Fabio Borini has turned into persona non gratia to such an extent that you and I have more chance of game time now. Last season we outscored our own defensive mishaps but if you stop doing that there’s going to be a searchlight on your back four and the defenders have done themselves no favours. We now have two clean sheets since March and, as disappointing as Hull was, it comes to something when you’re happy with half a scoreline.

The defence is the one thing that Rodgers has never really nailed. Oh, he’s spent money there but it’s never worked for him. Whereas Benitez and Houllier went straight to the root of the problem, Brendan has pushed a strategy of defence through attacking and pressing play rather than front foot leadership from his back four. Again, if we’re not doing that, gaps are going to appear. His best defensive record stems from the second half of his first season when he brought Carragher back, when Jamie’s vocal cords got as much of a work out as his legs. I’d hoped that Lovren would at least be a loudmouth – organising the back four, telling Mignolet that he’s  allowed to come off his line and coaxing Skrtel to  abandon his amateur wrestling career but, if anything, he’s quieter than the others. Great defences have shouters. We don’t seem to have bothered with any of that. We’re not in the least bit aggressive.

I’ll go further. There isn’t enough aggression throughout the entire team. There’s fight to some extent but that isn’t the same thing. Yes, Brendan was right to praise the spirit of the camp in the last 10 minutes at Loftus Road but we’re just meek when it comes to getting on the front foot. This Liverpool side is easily bullied, easily cowed. Look at West Ham, City, and Villa. You can put Madrid in a separate category as they’re better than us in every way but even then we should have reminded them just exactly who they were playing. Better than us? Not while you’re in the stands, son. Faster? Not with my studs on your calf. You don’t get a free night in this ground.

Oh, they were always going to win but the resignation after the first goal was as disappointing as it was evitable. In the second half, every member of our back four scored an impressive 0% in the Tackles Won department. That’s appalling. That’s embarrassing. Obviously, you can add no bookings to that. Get fucking angry, lads. We’re not the team we were last season so what do you do? You dig in, you work harder and you give yourself a chance. Nice possession stats and pointing at one player isn’t going to do it. We’re working hard enough but where’s the fire?

This isn’t an attack on the manager but it’s his job to instill those qualities. He can do it as he’s done it before. He got mopey Gooner wannabe Luis to genius Luis in a few short weeks. Get at them, Brendan.

This club is all about extremities with few people seeing Brendan Rodgers as ‘alright, I suppose’. He’s either the new Shankly or a manager who got lucky with Suarez. I’m definitely in the middle. He’s had his start, he’s had his great season and now it’s time to see what he can do when the problems are of his own making – as all strategies have them built in. I think he can do it but he may need to edit the blueprints and become more defence-minded and pragmatic first.

This is where we find out.