HOLDING OUT FOR NO HERO

There’s a problem here between what people want and the reality which is in front of them and which will remain in front of them. Which is that Brendan Rodgers hasn’t bought a pure holding midfielder in five transfer windows as Liverpool manager. Emre Can was used ahead of a holder in his friendly and substitute appearances for Liverpool. There have been few plausible links with a holding midfielder.

In Rodgers’ two seasons at Swansea City he bought what appears to be one holding midfielder. Leon Britton. Who had left on a free in the previous window. Britton also wasn’t supposed to be a holding midfielder. He had played a slightly more advanced before his move to Sheffield United – scoring fifteen goals in his first spell at Swansea and only once since returning under Brendan Rodgers. Rodgers made Britton into the player who plays that position.

So in the last nine transfer windows Brendan Rodgers has bought maybe one holding midfielder who is the same bloke who had left before he got to Swansea. According to wikipedia, in the summer Swansea were promoted to the Premier League Brendan Rodgers bought only one midfielder. Wayne Routledge. He isn’t a central midfielder. The summer before he bought two midfielders. Scott Donnelly, who got one appearance and now plays for Havant and Waterlooville and Kemy Agustien who is now at Brighton.

Alberto, Lallana, Can, Allen, Coutinho are the only real five midfield-y players Rodgers has bought from twenty permanent outfield signings since arriving. Of them you can only imagine two of them fulfilling a role as a holding midfielder – only two could feature in the 2 in a 4-2-3-1 or as the 1 in a 4-1-3-2.

This isn’t to say he’ll never buy a holder. But he’ll never compromise into one who doesn’t offer much more. He’ll not want a player who can’t pass the ball, who isn’t technically good, to be at the base of his midfield. And so the pure holder who can also do all the other stuff is a rarity in world football. They go for top whack and it has only been in the window just gone that Rodgers has had genuine top whack to spend. I very much doubt Rodgers would pass up the chance to sign Busquets. He just isn’t going to sign anyone Wanyamatic. He isn’t going to limit what can be done in that area of the pitch and all the evidence is that he’d rather adapt a more expressive player and get him to do that dirty work than get someone who arrives sleeves already rolled up. And at the minute this Liverpool squad’s only player who you’d say was a pure holding midfielder is the sadly immobile Lucas Leiva (and he is another player who has been moulded into the position rather than arriving as being capable within it). 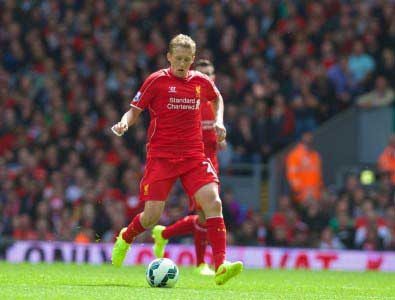 Lucas Leiva going as quickly as he can, the poor lad. (CREDIT: David Rawcliffe/Propaganda)

It’s a situation further compounded by Gerrard. Last season, away at Spurs, we saw what Rodgers wants in its purest form without Steven Gerrard playing (though with Lucas Leiva playing). Gerrard then reasserted himself and was excellent for four months mostly playing weekly football and he’s Liverpool’s leader. He’s been a brilliant player and somehow, somewhere (Saturday 27th September, Anfield) he will be brilliant again. He’ll have more farewell tours than Bob Hope but the jokes won’t get old. He’ll spend this season playing more games than he sits out and therefore you can’t offer first team football to a holding midfielder good enough to come in for a big fee.

I think the eventual solution to this – through this season when Gerrard needs to sit out and into next – is that Rodgers’ll want two or three central midfielders exceptionally mobile centre midfielders rotating around the area, all taking turns to work without the ball, all playing when they do get it. Henderson, Allen and one other. Comfortable on the ball, tactically astute, always looking to play. There is every chance the one other is next summer’s big signing. Perhaps January’s. I’d be surprised if it is a specialist like M’Vila rather than a hard running, technically brilliant all rounder like Pogba (names chosen simply because they are both French internationals people talk about. Substitute in names of your choice). It also wouldn’t surprise me if Rodgers had a look at the younger players at the club to see if anyone can help do this.

In the immediate short term, Liverpool need to do what they have to to get themselves to West Brom unbeaten and reassess. Reassess collective fitness, reassess how often you deploy the captain, reassess where Lallana and Coutinho can fit in and flourish.

Fundamentally I hope Rodgers never compromises himself on this. Not because I believe that to be endlessly right (it patently isn’t – loads of managers have had and are having success with holding midfielders right now) but because when managers start compromising what they are about at core level is when managers lose their way.

I believe those calling for that change, for that compromise are howling at the moon. The howls may be fair points. They may even be right. But they are, to the reality in front of our eyes, irrelevant. The defensive specialist craved isn’t just around the corner and he almost certainly never will be.