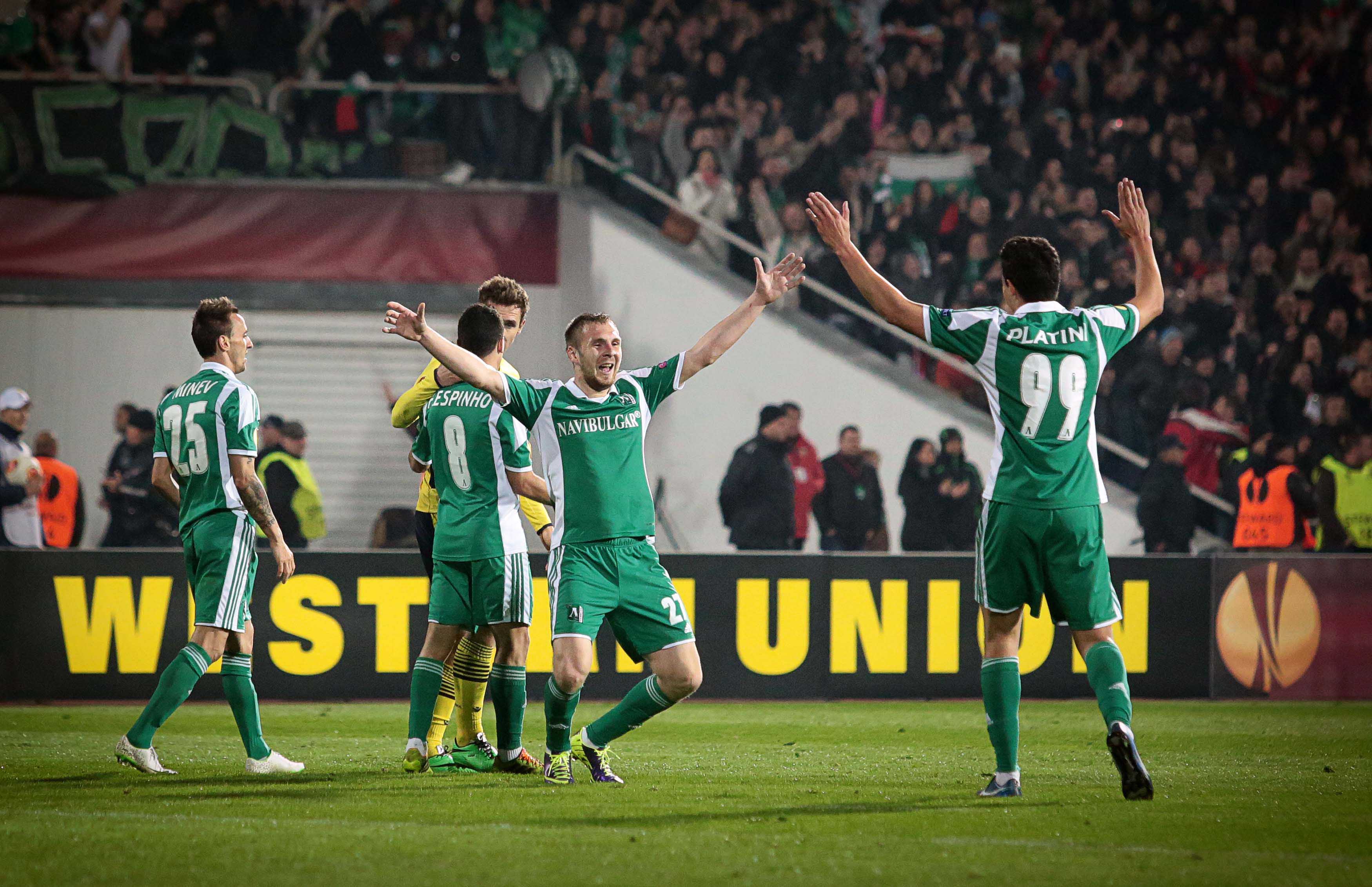 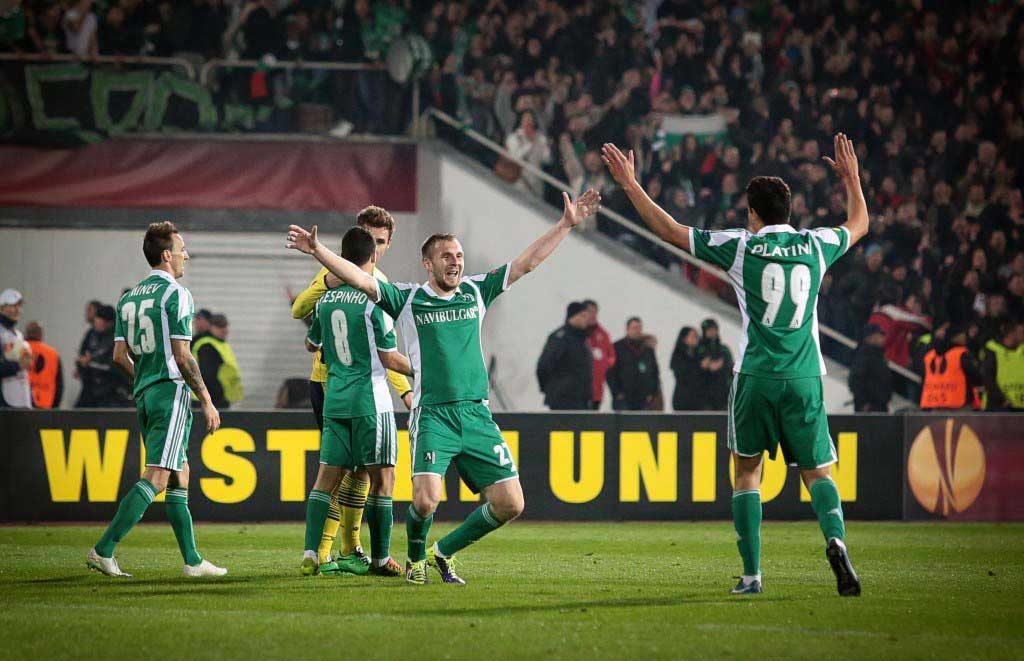 TOP MOTI: Ludogorets’ Cosmin Moti – the unlikely goalkeeping penalty hero – celebrates with teammates after a 3-3 draw with Lazio in the Europa League in February. Pic: paimages.co.uk

Oh Ludogorets, what a name.

You, Ludogorets, are exactly what the Champions League should be about. The team you’ve never heard of from a far-flung pocket of eastern Europe, the complete unknowns in this competition of over-familiarity, glitter and glitz. A town with a population of 33,000 and a club which was formed the year Liverpool won the treble with a stadium capacity of 8,000. Situated in the north east of Bulgaria and some 600km west of the Black Sea, Razgrad is a 31-hour drive from Liverpool.

These Bulgarian champions are vintage European opposition from a bygone era. The story of how they got here, though, is a more modern tale.

The club was founded in 2001 as Ludogorie Football Club, but adopted its current name after one of the city’s first football clubs, formed in 1945, was dissolved in 2006, and acquired the license of Ludogorets 1945 Razgrad four years ago. The club is named after the region of Razgrad in which it is located, the “region of wild forests”.

When Liverpool last appeared in the Champions League in 2009, Ludogorets had only been in existence for eight years and were still playing as amateurs in the third tier of Bulgarian football.

The club was bought by businessman Kiril Domuschiev in September 2010 and immediately the club’s aspirations and resources transformed. After a single full season under new ownership the club won promotion to the Bulgarian A Group for the first time. They have since won the league three times in a row. But Domuschiev is no typical footballing sugar-daddy, with the club’s annual budget of  €5m the second-lowest in this season’s Champions League.

Unknown amongst the major citadels of European football and the mainstream, but in Bulgaria they are more than simply a rising force, they are the dominating force. The country has not been represented in the Champions League since Levski Sofia departed in December 2006 on the back of six defeats, one goal scored and 17 conceded against Chelsea, Barcelona and Werder Bremen.

Ludogorets’ passage to this year’s Champions League group stage had nothing to do with the bank balances and spreadsheets that have underpinned their rise in domestic football. Trailing 1-0 to Steaua Bucharest from the first leg, and heading out at the qualifying stage for the second year in a row as the clock ticked 90, the Bulgarians were saved in true Roy of the Rovers style.

Brazilian Wanderson Cristaldo Farias – one of the best names in world football – volleyed a spectacular equaliser from 20 yards out to take the tie into extra-time. With the over-time ticking down and penalties looming, goalkeeper Vladislav Stoyanov was sent off in the final minute and with all three substitutes made it fell to 29-year-old central defender Cosmin Moti – who had never played in goal – to don the gloves and try his luck.

Moti, a Romanian international who had spent seven years at Steaua’s neighbours and rivals Dinamo, stepped up himself to convert the first penalty, before saving two, and sending Ludogorets through 6-5. He’d clearly brushed up on his penalty saving technique, imitating the wobbly legs of Jerzy Dudek and Bruce Grobbelaar as he denied his countrymen in memorable style.

Spare a thought, perhaps, for Steaua’s Lithuanian goalkeeper Giedrius Arlauskis, who will forever be remembered for being upstaged in a penalty shootout by a centre-back in goal.

Some would say Ludogorets, the perceived minnows of Group B alongside Brendan Rodgers’ Tricky Reds, Real Madrid and FC Basel, are on a hiding to nothing.

But the team from a town with a population smaller than Widnes are not first-time no-hopers in European football; this is their second season in UEFA competition. Last year they topped a Europa League group including Dinamo Zagreb, PSV Eindhoven and Chornomorets Odesa. Indeed they did the double over PSV, and beat Lazio over two legs in the last 32 before falling to eventual semi-finalists Valencia in the Last 16.

There is a charm to these Bulgarians too.

A visit to the Ludogrets website is like finding a tourist information centre in a sleepy European town, a hidden treasure trove aided by questionable translations.

Proclaiming the club as “The Creator of Fotball Fasion” (presumably “Football Fashion”) it says, “Ludogorets team a lawgiver of football fashion and European phenomenon with these two consecutive titles in A group. The team of Ludogorie is the only officially recognized team in Europe with a such achievement, achieved immediately after the debut in the élite.”

What even is a lawgiver of football fashion?

But if you can wade through the false verb conjugations, and the gumption to call themselves “way better than their opponents”, there’s something to admire about the ambition of this 13-year old club. 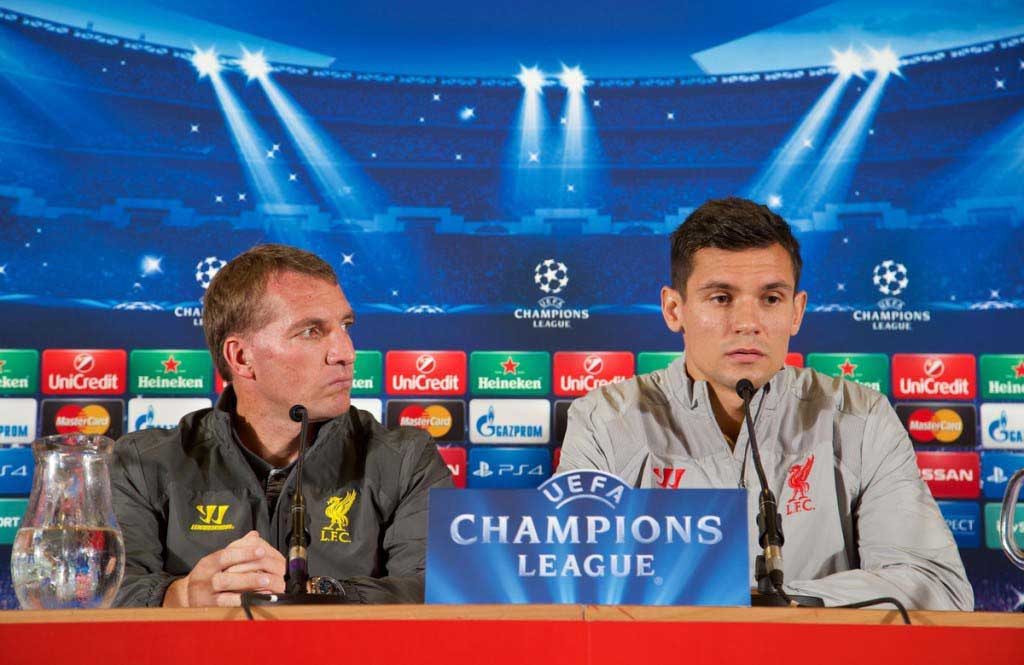 They are a quickly developing club investing in first-team players, a modern stadium and a training ground to become the epicentre of north-eastern Bulgarian football. It bodes well, too, for the future of the national side, which has fallen on hard times in the two decades since their fourth place finish at USA ’94.

Of the recent Bulgarian squad, called up for the 2-1 Euro 2016 qualifying win against Azerbaijan last week, six play for Ludogorets, comfortably more than from any other club. The current Ludogorets squad has a more cosmopolitan lineup about it, despite providing the bulk of the national side, with players drawn from Tunisia, Brazil, Spain, Colombia, Portugal, France, Finland, Slovenia, the Netherlands and Romania. Even Madagascar.

The team’s attack is led by Slovenian forward Roman Bezjak, whose six goals in last year’s Europa League saw him finish as the third-highest goal scorer in the competiton. Dutch winger Virgil Misidjan provides the width and pace, while Brazilian playmaker Marcelinho dictates the play.

This year should not be in a flash-in-the-pan appearance for Ludogorets, but their presence in the group stage has the Champions League harking back to days of the old European Cup. When away days really were thousands of miles away in unchartered territories, when the clubs and the players were unknown denominators.

They’re not the only far-flung Eastern European team in the competition, but they are fresh, a new name; they provide the excitement and novelty that a BATE Borisov no longer can.

That they made it here off the back of a defender saving two penalties in a shoot-out only adds to the intrigue.