THURSDAY NIGHT IS ALRIGHT FOR TALKING 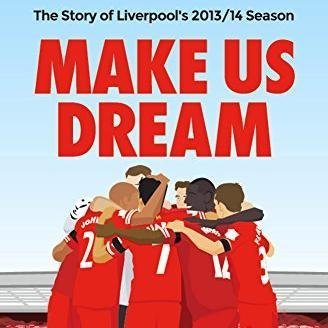 On Thursday me and John are launching our book along with our many contributors. A wonderful group of people. We will be talking aloud for a while mostly about football and then Silent Sleep will play some lovely music.

We’re proud of the book. We think it is good. Look how nice this is from David Prentice in The Echo. And we’ve never met or bribed him.

We’re also looking to do some events similar to this Liverpool one in London, Dublin and Belfast. We’re working on that. We only have two pairs of hands.

So Thursday (the 21st). Doors at seven. We’ll be selling the book for ten quid and if you want we’ll sign it and I’ll try my best not to get embarrassed.

Drinking, talking, song. A tried and tested formula. We hope you can make it. If you can you can buy tickets here for £3.30.

And to whet your appetite here is Ben Smith’s Foreword which he so kindly wrote for the book:

WHERE do you start? How do you begin to sum up a season of a thousand dazzling images and a dozen ‘I was there’ moments with words and words alone?

This was no ordinary football season. This was the season when everything changed. The season when the status quo, at least to some degree, went out of the window and the pre-season predictions were being torn up by November. This was the season that blew through the English game like a breath of fresh air. The season when daring, adventurous football made an audacious comeback and the season when everyone associated with Liverpool Football Club found hope, and with it power and effectiveness and purpose and direction. And I am not talking about the incredible results or the records that tumbled relentlessly, nor am I talking about the statistics or the style and swagger with which the team played. I’m talking about something much more important than that, something that returned to Anfield this season, something that you won’t see on a league table, or read in a newspaper. It was something I felt every time I went to Anfield to write or broadcast this incredible story, in fact, it was something I felt every time I was in the city. You could see it in people’s faces, hear it in their laughter. 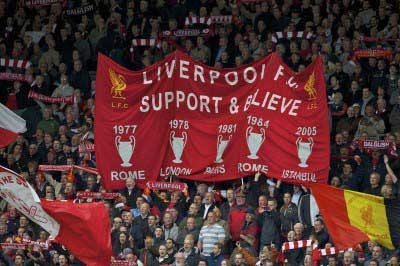 The Joy – Photo by David Rawcliffe/Propaganda

That same feeling came flooding back to me when I read the vivid and vibrant writing in this wonderful, passionate book. Because what leaps off the pages and what Neil Atkinson, John Gibbons and all their many esteemed contributors capture so brilliantly in what you are about to read is the feeling of reclamation, the feeling of a city and a football club finding harmony. The feeling that for the first time in a long time, Liverpool felt like a club at peace once again, a club buoyed by belief not burdened by fear or pressure. The defeats of Arsenal, Manchester City and Spurs were, of course, significant moments. But what comes through in this book is that it was the defeat of the darkness and back-biting which has engulfed the club over the past decade that may ultimately prove the most important one of all. Liverpool burned away that darkness and let in the light with the way they played, with the enjoyment they brought back to Anfield.

Neil and John lived and breathed every moment of it. They talked about it, fought about it, they wrote about it and ranted about it (as listeners to The Anfield Wrap podcast will testify). They were there when it mattered and when it didn’t. As a result, the story they have chronicled with such contagious passion is as compelling as it is instructive. It tells the story of a season that will stand the test of time, in such a way that ensures this book will stand with it. From a memorable pre-season which culminated at the mythical MCG in Melbourne to explosive and exhilarating victories at Anfield, the story of the season is told in a way that the mainstream media simply couldn’t match. The depth, the insight, the love, the stories, the humour. This is a book that gives words to the memories, it is a bible of what really happened, how people really felt, what the fans said to each other in the pub, what it meant to go to the game, to enjoy and endure it. You’ll know what I mean when you read Neil’s review of Liverpool’s trip to Craven Cottage. It touches on every key moment, on and off the pitch, in a way that is utterly comprehensive and forensic. This book has been written with heart and head. There is insight, there are brilliant and witty observations, there are love letters, there are moments of despair and disappointment. There is wide-eyed awe at Luis Suárez’s exhilarating blend of grace and devastation – the magician from Montevideo, with feet as sensitive as a pick-pocket’s hands. And delight at the way Liverpool poured forward time after time, scattering opposition shirts like laundry torn from a washing line. There are tears too, tears of pain, tears that the dream was snatched away and tears of pride. History weighs heavy at Anfield, it always has and always will – the present cannot exist without the past. But this was the season that Brendan Rodgers took Liverpool back to the future and created a feeling that this is now a football club ready to create new history. It no longer feels that Liverpool’s past is holding it back.

After the final match of the season against Newcastle at Anfield, Rodgers walked back to his office to be with his family. He was asked when he had known the title had gone. Was it Steven Gerrard’s slip against Chelsea? ‘No, no,’ he said. ‘I knew when Jordan got sent off against Man City. I knew I couldn’t replace him. But it’s gone now. All that matters to me is that we made them dream.’

These pages carry those hopes and dreams. What a title race. What a season.

Buy the book here in the UK.

You can buy the book here overseas here.

You can get the kindle version here.

And parts one or two of the audio commentary thing here.