Greece (I): How Can You Care About One Point Six?

NEIL SAID do something a bit cultural or a bit football or just your impressions.

And then he gave me Greece. So…

Ouzo is disgusting. I like Kebabs though. I really like Kebabs. I’ve just had some Lamb Shish Kebabs for my tea from M&S. Well in M&S.

I work with loads of Greeks – it’s actually staggering how many Greeks they’ve managed to fit in our office. I’m fairly sure there’s no Greeks left in Greece. Maybe there aren’t. Can someone check for me? In fact, if anyone really wants to know, I’ll go and check it out for myself in July. For 2 weeks preferably. Can anyone box that off for me?

I was a bit gutted when I got Greece, truth be told. Mainly because of Andi Thomas’ batshit mental piece from the Euro2012 write ups – it’s a challenge. So I’m not going to do anything of that ilk cos he’ll have a go at doing that about Honduras and he’s much better at it than me. That isn’t a particularly big compliment though; it’s like being better at diplomacy than Samir Nasri’s wife.

There’s a lad I work with who has this dislike for teams who linger. Dull teams who just sit around the bottom of the league, serve no purpose, fight against relegation for years and then eventually they get relegated and his feelings of disdain can dissipate. Southampton and Coventry of the 90’s are the best two examples of this from Premier League days gone by – what was the point of them? Bar taking what seemed like millions of points off the idiotic mid 90’s Roy Evans Redmen, they seemed to just survive and linger around being boring. He was absolutely made up when Osasuna got relegated in Spain the other week. I didn’t think something like that could make someone so happy.

Anyway, if we transfer this to international football then it’s probably going to fit Greece. Yeah, I know they won Euro 2004 and that but I’m not bothered about that. I basically spent that summer as a 17 year old drunk so I’m just gonna forget it happened. I don’t really know how it happened and I view it as a cosmic mistake. The point is this – they did that in 2004 and then decided to become utterly pointless. Maybe they are trapped by it?

The qualifying campaign sums them up really. They beat Romania in a playoff. Was any neutral really bothered who won that one? I sat there watching it knowing that whoever won it, it was going to be at a cost of the best part of 5 hours of my life before they get knocked out in the group stage having bored me rigid. You need to understand this – I can’t ignore it. I don’t get to ignore any of the games – it’s the World Cup and I’m compelled and bound by a contract of employment, to watch every game. One of their games is on at 11pm though for those who fancy getting their head down. It is one to miss.

Their qualifying group was Bosnia & Herzegovina, Slovakia, Lithuania, Latvia and Liechtenstein. A real who’s who of European Football, all riveting stuff. A fantastic advert for the expansion of the European Championships to twenty four teams.

In their ten games, against that collection of teams, how many goals do you reckon featured in their games? I’ll leave a little gap here for effect. So unless you’ve scrolled a bit too far you’ll have time to have a little guess at it. But I reckon that whatever you guess you’ve probably guessed too many.

It was 16. Six. Teen. 1.6 per game. ONE POINT SIX. This isn’t scored – this is including the opposition! Last season in the Premier League there was 2.77 goals per game. The lowest there has ever ever ever been since football began in 1992? 2.45. 1.6. A goal less than the average Premier League game. That’s what you’re getting with this mob.

I’m not one of those dullards who think that football without goals is nothing interesting, but come on Greece, give us something. How do you manage to play 540 minutes against Latvia, Liechtenstein and Lithuania, score nine goals and still end up going to a World Cup to bore the World? At least they came second. In the same six matches Edin Dzeko scored eight goals ALL BY HIMSELF.

It doesn’t get much better when you actually have a look at the lads they’re taking to Brazil. Their supposed best player spent 5 months sat in South West London on his arse after signing for Fulham and got relegated, their captain was in the same boat except he actually did a bit of the football. Giorgos Samaras has 8 goals in 71 games and he’ll probably start. Only two of their defenders have ever actually scored for their country despite a combined total of 239 caps. Great stuff that. Tell FIFA that if they need to market the World Cup to a new audience that Greece should be their starting point.

I’m looking for inspiration for something positive, but to be honest I haven’t got much. I’ve been to Greece for about 18 hours and that was a truly miserable experience (May 2007). Remember that keeper they had about ten years ago who looked like George Clooney? Far better looking than he was a goalkeeper though, still haven’t quite figured out how he didn’t save that Beckham free kick that sent England to the Far East in 2001. I’d be far more enthused about Greece if that absolute lunatic Sotirios Kyrgiakos was going; even that mad one who plays for Schalke isn’t going.

Ultimately it comes down to the supporters. They are brilliant. I hope loads of Greeks make the trip across so they can set loads of flares off and just be mad. I’ve watched, on telly admittedly, Olympiakos play Panathinaikos at Volleyball before and they bring all the Pyro to the table there, and that’s indoors which is really funny. And dead mad.

Paok are really good at it as well. 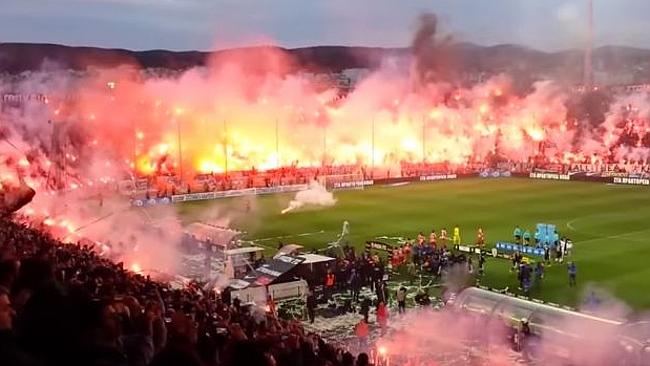 I think the best thing I’ve ever seen was in a Greek footy match, televised again. A game got abandoned due to crowd trouble, for the life of me I can’t remember who it was to find or even search for a video of it, but what happened after the abandonment was absolutely brilliant.

Riot Police were standing in the lower tier whilst fans were starting to file out of the upper tier. For some reason, and I’ve no idea why as it didn’t make sense, the police were facing the pitch as opposed to the fans who were causing the trouble. This one lad saw an opportunity though; he decided to jump out of the top tier in to the lower, land like a cat, run down about ten stairs and then unleash a cracking haymaker on the back of this copper’s head that saw him fall down about 15 stairs before coming to a halt. I always wonder what happened to this lad – though I suspect it wasn’t nice – and if he’s aware he’s responsible for one of the oddest things I’ve ever seen. I don’t condone violence or anything, it was just funny. It disappoints me a little that I’ve not got this on video as the World needs to see this.

The football might be pretty dire, but the Greek League brings stuff like that to the table that no one can match. Bar possibly the Turks, but don’t tell the Greek lads that or we’ll have murder.

I don’t like Greece. They have no back story, no nothing. They had their moment in 2004, and frankly, they should have called it a day there and pooled their sporting resources another way. Basically I think I’ve got a terrible face on about Greece because of this final, decisive sentence though:

ZLATAN IBRAHIMOVIC IS SAT AT HOME AND GIORGOS SAMARAS ISN’T.

That’s a haymaker to the back of all of our heads. I’m still falling down the stairs off the back of it.