FEELING SICK OF LIVERPOOL? NOT ANY MORE 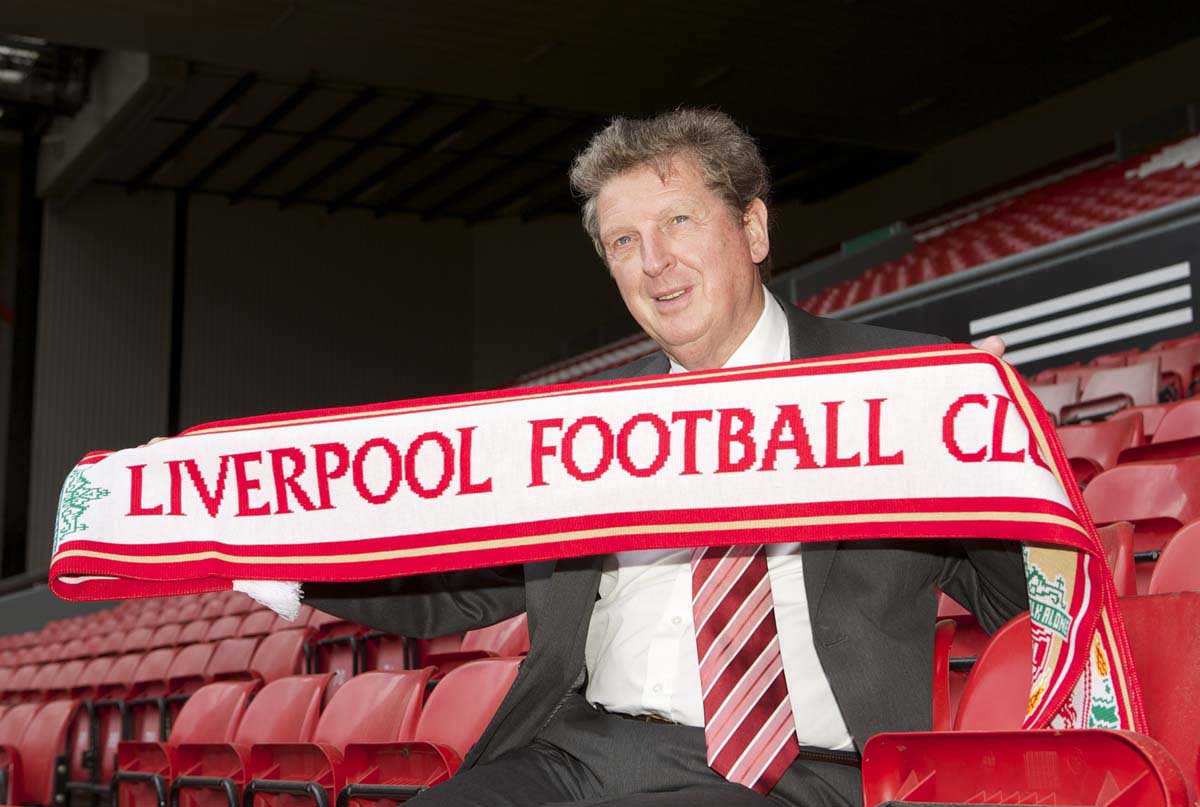 REASONS TO BE CHEERFUL: This man isn’t the manager of Liverpool Football Club. Pic: David Rawcliffe-Propaganda

ALMOST four years ago to the week, I wrote a blog post on my old Well Red blog entitled ‘Why I’m sick of being a Liverpool FC fan’. I wasn’t sick of the club – after a lifetime supporting it you can’t turn that off. It was just the actual being a match-going fan bit. It wasn’t enjoyable. The debt-ridden Liverpool of the time was a 24-hour soap opera; a club torn apart by politics and in-fighting, owned by carpetbaggers and managed by a coach in Rafa Benitez that, putting it politely, divided opinion among supporters.

On the pitch, the Reds limped to a seventh-place finish in the Premier League, 23 points behind the title-winners Chelsea. The season finale was a forgettable 0-0 draw at Hull. The only dubious pleasure to be taken from the campaign was a touch of schadenfreude – Manchester United were denied title No.19 by Chelsea by just a single point. A moment worth remembering perhaps when griping about rival football fans doing the same to us now. It’s part of the game – it always will be. Crack on.

Going the match then, in 2010, was hard work, a time of subdued atmospheres, arguing among fans, marches, protests, newspaper leaks and agendas. No-one then was thinking about trophies or title challenges. No-one then was talking about sublime football, bucketloads of goals, a rebuilding of Fortress Anfield or a smashing of the Premier League status quo. Conversations instead were dominated by the fear of administration, the likelihood of Liverpool becoming the next Leeds or Portsmouth, of managed decline and of reduced wage bills. We cared not of men in football boots making us smile, we cared instead of removing men in suits whose motivations revolved solely around money.

Back then, what did we have to look forward to? All the talk was of Fernando Torres and Steven Gerrard considering their futures. Of Benitez being sacked (within a month he was). And of owners in Tom Hicks and George Gillet that were prepared to dig their heels in and hold out for a profit however long it took and regardless of the damage done to the club, reputation-wise, on the pitch and financially. Roy Hodgson was appointed in the July and you know the rest. They are times best forgotten. Dark days indeed.

To read Twitter following Manchester City’s win against Aston Villa, it would have been easy to think we had returned to 2010. Talk of a thin squad. A dodgy defence. An inexperienced manager and the apparent inevitability of next season’s Premier League. We may as well give up now, yeah?

It’s a bit early for all that. If anything, surely Liverpool’s exploits this season have smashed the myth. Liverpool have taken 81 points this season so far, who’s to say they can’t bolt on another nine next season? Arsene Wenger’s excuse for Arsenal’s lack of Premier League success in recent times has continually been that you can’t compete with Manchester City and Chelsea without big big money – in wages and in transfer fees. The current Liverpool side says otherwise. If money is spent wisely in the summer, the Reds can go again, even with a fatter fixture list.

Why? Because every transfer for every club is a gamble. As is every managerial appointment. And Jose Mourinho is a tit. So despite the doom and gloom from some, there’s no guarantee that Manchester United will bounce back, no guarantee that Chelsea will be stronger or that City will be better. We wait and see and we watch and wonder. It’s why we’re all in it – no-one KNOWS so why not look on the bright side? There’s plenty of light right now.

A nineteenth Liverpool title coming to Anfield on Sunday is now improbable, 20-1 according to the bookies. Not impossible but unlikely, out of our hands and in those of West Ham, of Big Sam, Scouse Kev and Big Andy (first name terms, all sound lads). 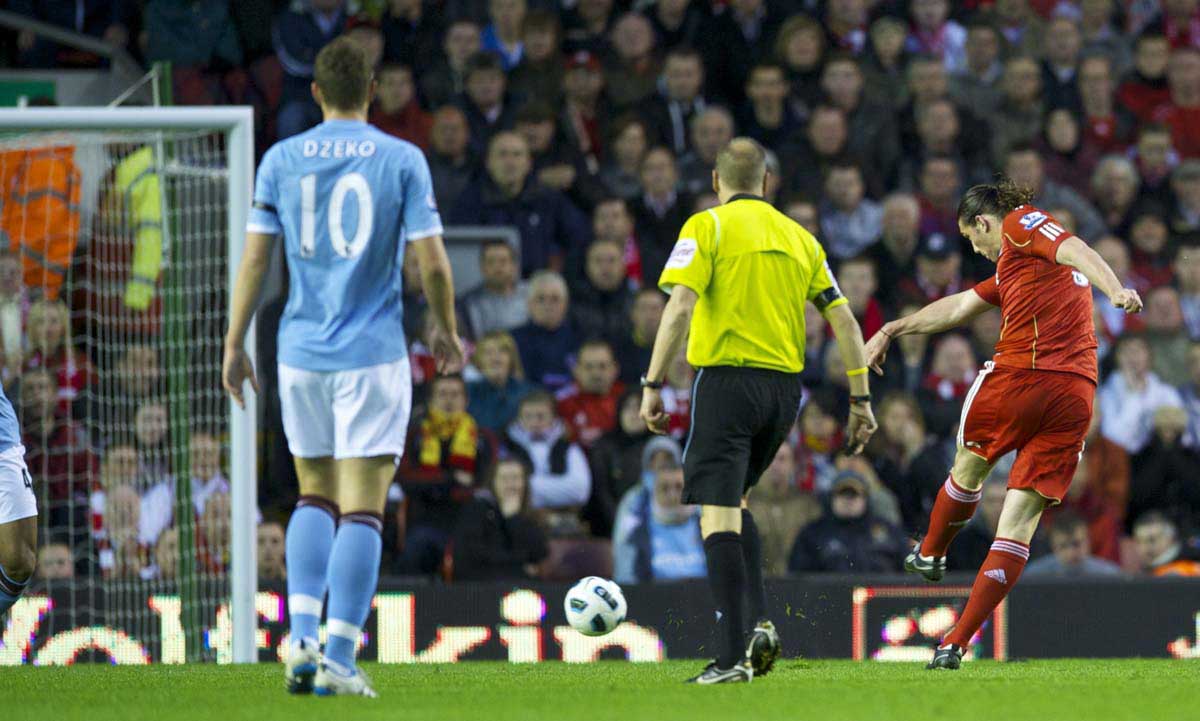 SWEET CARROLL NINE: Come on Andy, you owe us….

But for Liverpool to even take it to the final day, to score 99 goals, to win by five at Spurs, score five more at Stoke and batter Everton at Anfield. To humiliate the then table-topping Arsenal, boss it at Southampton and stroll it at Old Trafford. To bounce back and hit Cardiff for six, outclass Tottenham at Anfield with four and edge out Manchester City; that’s progress. Hugely exciting, unpredictable, expectation-smashing, grin-inducing, punch-the-air shiver-down-your-spine progress. We’re enjoying ourselves again and talking about the actual football. We’re singing, shouting and roaring. The Kop of old has returned. The game we fell in love with, not the circus around it, is the topic for post-match pints, not how a fan-base can be mobilised for battle. Liverpool are on their way up. There is team spirit, and faith in the manager. The club works. It can get better but by in large it’s fixed. It’s so far removed from Roy Hodgson et al it’s untrue and we don’t – thankfully – have to revisit those days to demonstrate it.

Liverpool at this stage last season were seventh, on 58 points, 12 points adrift of the Champions League places. Now Brendan Rodgers’ side have just been displaced from top spot with a game to go with 23 more points in the bag and 29 more goals scored. Say it all you want, but you didn’t see it coming. A 33-1 betting slip is a punt not a prediction. Hope not expectation.

It’s been a cracking campaign – a season to remember – and, whatever happens, Sunday should be a celebration of that. Instead of watching a glorified testimonial from half-arsed players, we will instead witness the efforts of the most entertaining team in the league going one last time and praying for a miracle in Manchester. This manager and this group of players have delivered over nine months of football. And then some. They should be thanked for that rather than sneered at for failings in crucial minutes of two games.

Forget the 0-2 and the 3-3 and think instead that next season we will again hear the Champions League anthem ring out around Anfield to a backdrop of You’ll Never Walk Alone and a passionate Kop. The league’s best strikeforce will remain, along with their supporting cast. And top quality reinforcements should be easier to find with the lure of Europe’s top competition and the opportunity to play for Brendan Rodgers’ entertainers. Who wouldn’t want to be a part of it, it looks like fun. These are good times, they could soon be great, if not this season then maybe next. Raise a glass and raise a smile. It’s probably all over, but it isn’t now.

And one thing’s for certain after this season: I’m not sick of being a Liverpool fan any more.