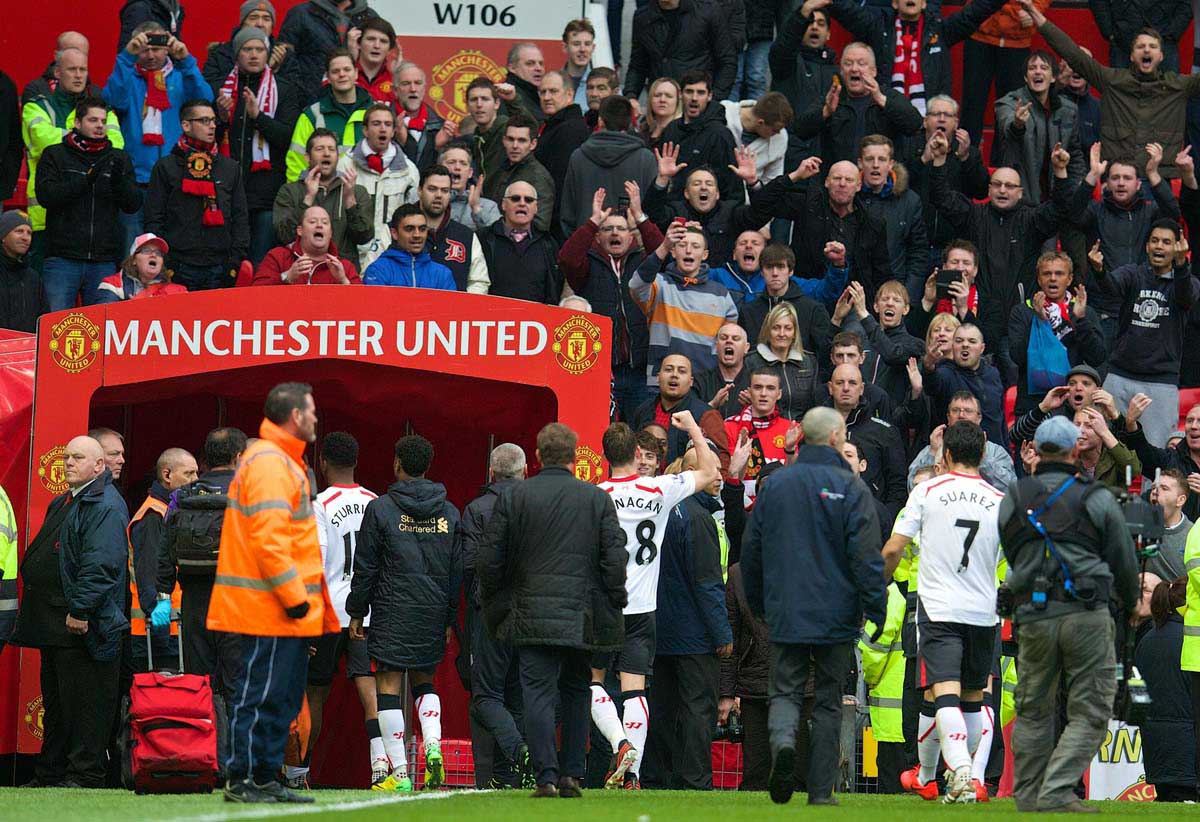 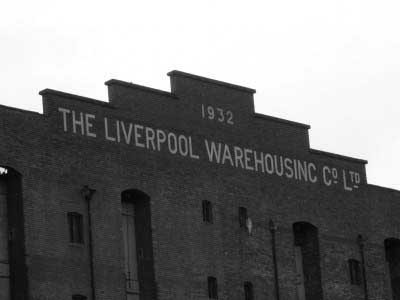 AS you approach Old Trafford over a bridge that spans the Manchester Ship Canal, the Lego-like frame of the ground begins to loom large; a white support structure visible as the traffic edges closer to a stadium that was once ruined by Luftwaffe bombs.

The ground was rebuilt of course, and is now second only to Wembley capacity-wise on English shores. But as Hitler’s bombs rained down in 1941, and decades later as new tiers were added and seats were fitted, one building looked on defiantly, same as it ever was; untouched, aging, but still standing proud and significant.

It’s another landmark on the Salford docklands, one that, for me at least, always grabs my gaze and lifts the spirits: The Liverpool Warehousing Co Ltd.

The bottom line is that it’s just a disused warehouse. But it sits there watching and waiting for a new lease of life on that corner, reminding the thousands that pass it every day of the name: of the city and of the football club – Liverpool. You can bet that for every Scouser that passes it and smiles, there are hundreds of Mancs that see it and growl. Imagine a huge reminder of Manchester within sight of Anfield every time you went to the match. Yes.

It flies the flag on enemy territory, it reminds match-goers that they didn’t always have it their own way at Old Trafford and perhaps now, this season, the sight of the name Liverpool stirs up thoughts of how a seemingly unstoppable football supertanker can quickly veer of course with the wrong people at the helm. For Graeme Souness and Roy Hodgson read David Moyes.

But while the name of Liverpool has been a constant on the Salfordian landscape since 1932 according to the building’s frontage, for far too long its significance has only resonated in history. Since Liverpool last lifted the title in 1990 – and won at Old Trafford with two goals from John Barnes along the way – the Reds had won just four more times in 27 attempts in all competitions in front of the Stretford End before Sunday.

In that time Liverpool finished above United in the league just twice. Last season, the Reds ended the campaign 28 points behind title-winning United. Seemingly as far away as what had become all too depressingly familiar.

So the warehouse was left waiting another year for its name to bring fresh significance and annoyance to the matchgoers, and few would have expected come August that the rise of Liverpool – and the fall of United – would happen so quickly and dramatically. Many thought Moyes was the wrong man. Few predicted Rodgers was the right one. But wherever opinions lay back then, the degrees of success and failure have been a surprise to most. 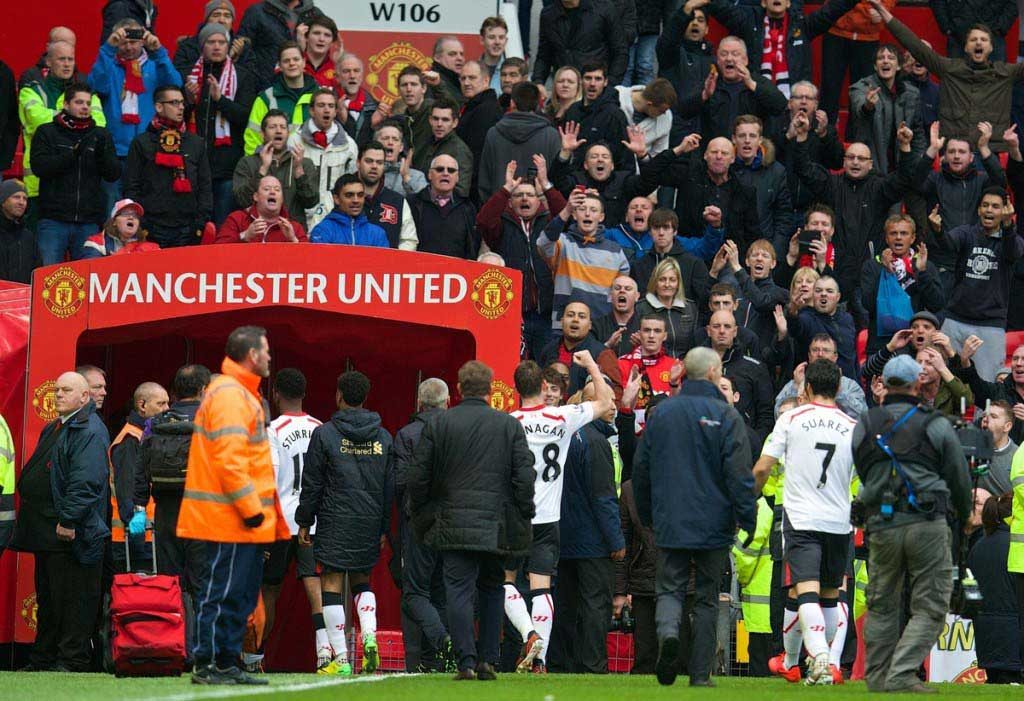 Sunday’s 3-0 stroll saw Liverpool do the league double over United and put the Reds 14 points clear of David Moyes’ side, who now look almost certain to finish outside the Premier League’s top four.

That the result has further fuelled dreams of number 19 for Liverpool while simultaneously kicking a rival in the plums is to be savoured and enjoyed, laughed at even. But when the sniggers settle and the smiles subside, pride in a Liverpool side restoring dreams of football’s top prizes will remain.

But back to the laughs first. Because pretty much everything about Sunday’s game was hilarious. From Moyes suggesting Liverpool were favourites before a ball had been kicked to the half-and-half scarves. From the non-Mancunian replica shirt wearer asking the very Mancunian fanzine seller where the Stretford End was (oh yes) to the fact that ‘The Chosen One’ banner still hangs high in said stand.

Then the game. As comfortable an Old Trafford win as you’ve seen. All the ball. All the shots. All the penalties. Liverpool as dominant as they have ever been and a United manager making defensive substitutions to save face as the scoreline glowed with Scouse superiority on the scoreboard. ‘Oles’ from the away end. The midfield bossing it. The defence assured. The attack a constant menace. It should have been seven. What no Ferguson?

An explanation then, for the permanent smiles on the faces of Reds right now. It’s been a while since a Liverpool team, and Liverpool fans, have swaggered around Old Trafford like they did on Sunday. It felt good.

Talk of a changing of the guard remains premature and in the grand scheme of things it’s just one more win, three more points and a step closer to making the improbable possible. Because West Brom, Everton, Newcastle, Tottenham and Swansea won there too, right?

Bollocks to facts and figures. It’s much more than that. Some United fans’ dream scenarios have stretched to winning the Champions League to deny Liverpol re-entry into Europe’s top competition after the Reds had finished fourth in the league in their alternative reality.

Given that mindset, you can guarantee many United supporters expected a performance. Their team would be up for it against Liverpool, they’d raise their game. Brendan Rodgers’ side would freeze in the enemy lair. And Luis Suarez only ever scores against the smaller clubs.

Steven Gerrard had it spot on in more ways than one. Given what had come before for Liverpool at Old Trafford, the bad decisions, the late equalisers, the inexplicable misses and the below-par performances, 1-0 up was no time to celebrate. 2-0 was though. And 3-0 definitely was.

Wayne Rooney’s ‘worst day in football’ was just one win for Liverpool. There’s plenty more to play for. But this was a statement. A tale of one manager on the way up and the other on his way out. Of one club figurehead adequately succeeded and another most definitely not. A tale of Liverpool on its way back, becoming one again. A story of a club no longer shrugging its shoulders about mediocrity. More sentences for the chapters about positivity and progress after years of burning the book.

And all of it on their doorstep. “20 times, 20 times Man United”? The chant during and after the match was desperation and defiance from United fans rather than backing and battle cry. Next season, tickets for ‘The Theatre of Dreams’ will no longer bear the word ‘Champions’. It’s the type of song they’ve long derided us for. But who really noticed anyway with laughing to be done?

And all within spitting distance of that reminder of the city’s name.

If warehouses could smile, the former home of The Liverpool Warehousing Co Ltd would have a grin wider than the Mersey right now. As they can’t, Manchester will have to settle for mine. And for the record, it’s not far off.