HE CAME FROM BARCA TO BRING US JOY 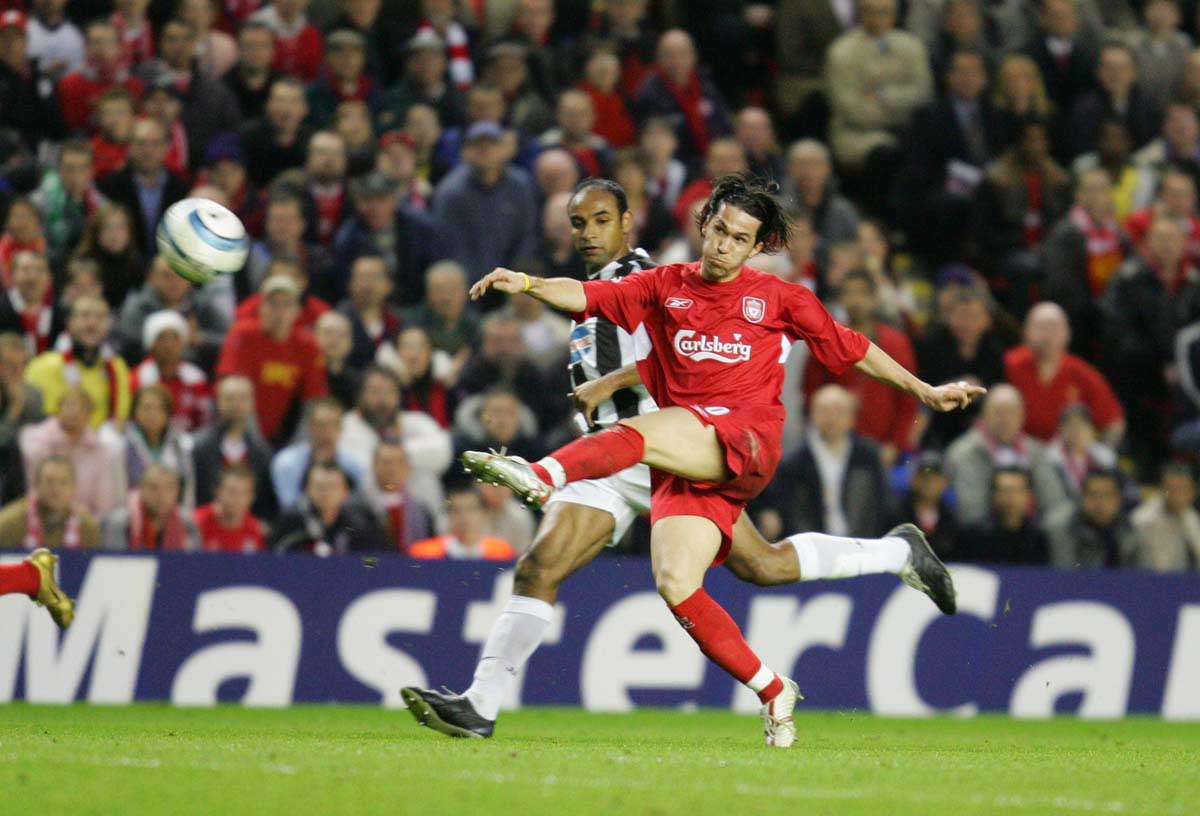 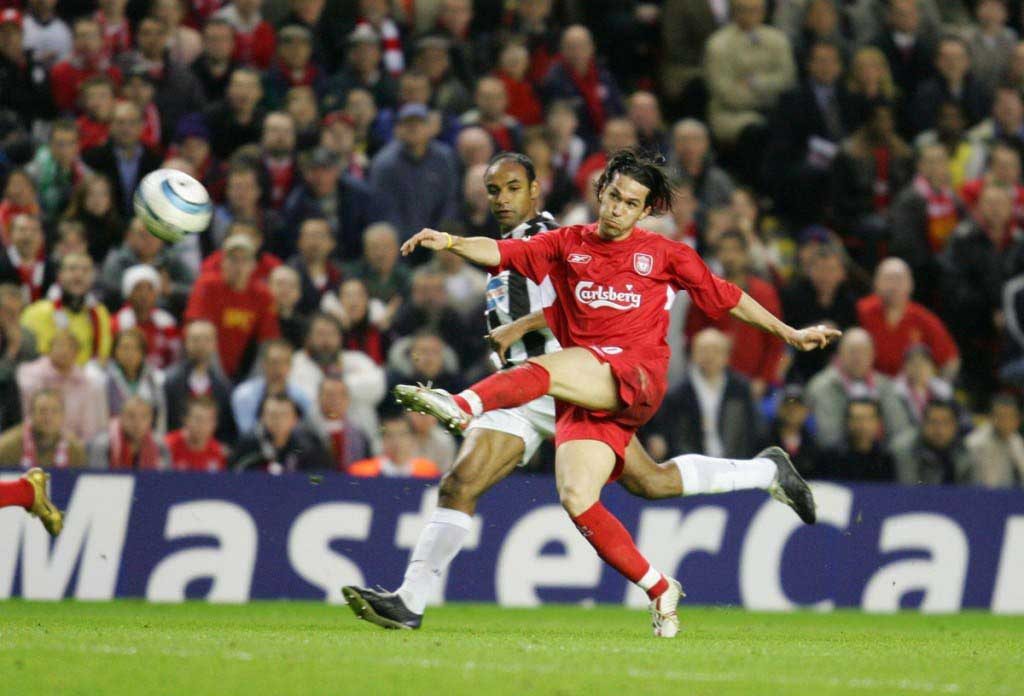 AT around 8 o’clock, on the morning of Tuesday, January 14th, Luis Javier García Sanz decided to call time on his career as a footballer. It was an event that will have passed most people by, and rightly so: when looked at alongside the wider concerns of the world – even of the footballing world – it was fairly trivial.

But it contained a quiet significance nonetheless. García, you see, was one of a dying breed. He is one of a select band of former Liverpool players whose name is still, six years after departing the club, sung exuberantly around Anfield.

What’s more, he’s not exactly a club legend. He’s no Steve Heighway or Kenny Dalglish or Robbie Fowler. He’s Luis García; he was at the club for a mere three seasons. Total contribution: 121 appearances and 30 goals.

Of course, to measure his contribution in such simplistic terms is a nonsense – despite the best efforts of Prozone, human joy cannot yet take a numerical value. García’s offerings in a red shirt are undersold by those figures, not least because he played a central and essential role in one of the greatest narratives in the history of a club stocked with great narratives.

But this isn’t a debate about whether García earned the right to be remembered by Liverpool supporters for years to come – patently, he did – it is about how now, after after his retirement, his memory represents something more.

In Issue Ten of The Blizzard, The Times writer and Anfield Wrap contributor Rory Smith laments the death of mystery within modern football. It is a sound and salient point, and a familiar complaint.

Inescapably, over the last few years, because of the twin explosions of modern technology and the profile of the sport itself, football fans now ‘know everything’.

“Gone is that capacity to surprise that the game once possessed,” Smith wrote. “By virtue of social media and the internet and ESPN and Football Manager, we as fans know exactly who is coming through in which league, where all the brightest prospects are. By that means we are never surprised.”

_________
“You have to accept Luis for what he is. When he played for me at Tenerife, I tried to change him, but you have to say OK, he does what he does and provides different things. I have kept trying to remind him – many times – that when he takes the risks he does, he should do it closer to the opposition box. He can give possession away and that can anger the fans. But he also does different things that excite them and he scores goals. I tried to change him in Spain, and he scored 16 goals for me, so you have to accept what he does.” – Rafa Benítez
_________
Today, it is unthinkable that Liverpool could sign a winger from Barcelona and, as was the case (for me, at least) in August 2004, have little idea what to expect from him. Indeed, only recently, all it took were a few nefarious whispers linking the Reds with a January bid to prise Pedro Rodríguez from Catalunya, and the internet was awash with ‘scouting reports’, heat maps and various hoards of performance data, all shedding light on precisely how the forward could improve the current side’s ball-retrieval rate in the final third.

Pedro won’t be signing for Liverpool, of course, but the point remains: Mystery has died its bloodless death, and it should be mourned. Luis García’s retirement is as strong a reminder of this as anything. But I’d argue that these very same developments, the ones which led us to ‘know everything, all the time’, also brought football another casualty: the cult hero. And by god was Luis García a cult hero.

He meets the criteria perfectly:

García was – and is – a cult hero in the same way that Clerks and The Big Lebowski are cult movies. And cult status is a very specific thing: it’s not simply a matter of being popular. Just as you won’t get Evil Dead II being compared to Schindler’s List, so García’s name will never be mentioned in hushed tones alongside those of Messi, Ronaldo and Maradona. But being someone’s favourite is very different from being the best. Being loved is something very separate from being admired.

No, achieving cult status does not come through being straightforwardly popular. There needs to be an argument or two along the way, and ideally a good few instances of frustration, or else where’s the fun? And Luis was certainly good for those.

The countless failed Cruyff turns on the half-way line. The absent-minded dallyings on the ball. The botched, needless nutmegs. The half-volleys from 30 yards, shanked carelessly the way of the corner flag, after his team-mates had strained every sinew slowly and deliberately edging their way toward the opponents’ goal. Oh, Luis could frustrate with the best of them.

Pep Guardiola cited the stress of football management as the reason behind the evisceration of his hairline over the last few years, so he can only be thankful that he never presided over García.

Indeed, throughout the winger’s 35 months on Merseyside, the exasperated squeals of “LUIS!” aimed his way by Jamie Carragher (and picked up by the pitchside microphones every time) became as much a part of the Anfield matchday soundwaves as the pre-game rendition of Gerry & the Pacemakers.

It was all worth our while in the end, of course: that was his side of the bargain. We – us and Carragher – put up with a good deal of nonsense, and he won us a good deal of football games. And he did so in the most joyous ways: volleys, headers, long-range pearlers. Football songs are not always 100 per cent accurate (García’s preferences in alcohol, for instance, remain a matter of speculation) but the boy from Barca most certainly brought us joy.

And, to return to the real point, much of his ability to bring joy was due to just how unexpected his joy-bringing was. We may have heard whispers about García around the time he signed, but few of us had seen him play much, if at all. He arrived with an exoticism, a mystique, that only heightened the flair and fun with which he played. And in this sense, García was, if not one of a kind, then certainly one of the last of his kind.

Today, football leaves no room for the cult hero – or at best, it leaves very little. In one sense, football is full of ‘cult heroes’, but really, but in a more genuine sense, it’s completely devoid of them.

Nowadays, a footballer will receive the label on account of being a bit crap (see Ameobi, Shola, or Hibbert, Anthony), or if they err on the eccentric side (see Balotelli, Mario), but there are few genuine bolts from the blue in our brave new world of total footballing permeation.

It’s impossible for a player to capture the fans’ hearts in the way Luis García did at Anfield – or Juninho did at the Riverside, or Ole Gunnar Solskjaer at Old Trafford – when, before the ink has even dried on their contract, every website has run an in-depth profile on them, and every keyboard pundit has had a collective debate about trade-off between their positional discipline and chance-creation rate and come to a largely agreed-upon conclusion.

It’s impossible to fill a niche when every fact is broadcast so widely and broken down so thoroughly. It’s impossible to take a set of fans by surprise when they know, so comprehensively, what to expect. Or at least it’s a hell of a lot more difficult.

So as we march boldly on into the future, laptops glowing, smartphones fully charged, and our Twitter timelines spewing forth an unending torrent of information from both, it couldn’t hurt to take a few moments away from all the madness, pour yourself a glass of sangria, and remember the pure and unexpected elation that Luis García gave us for those three brief years.