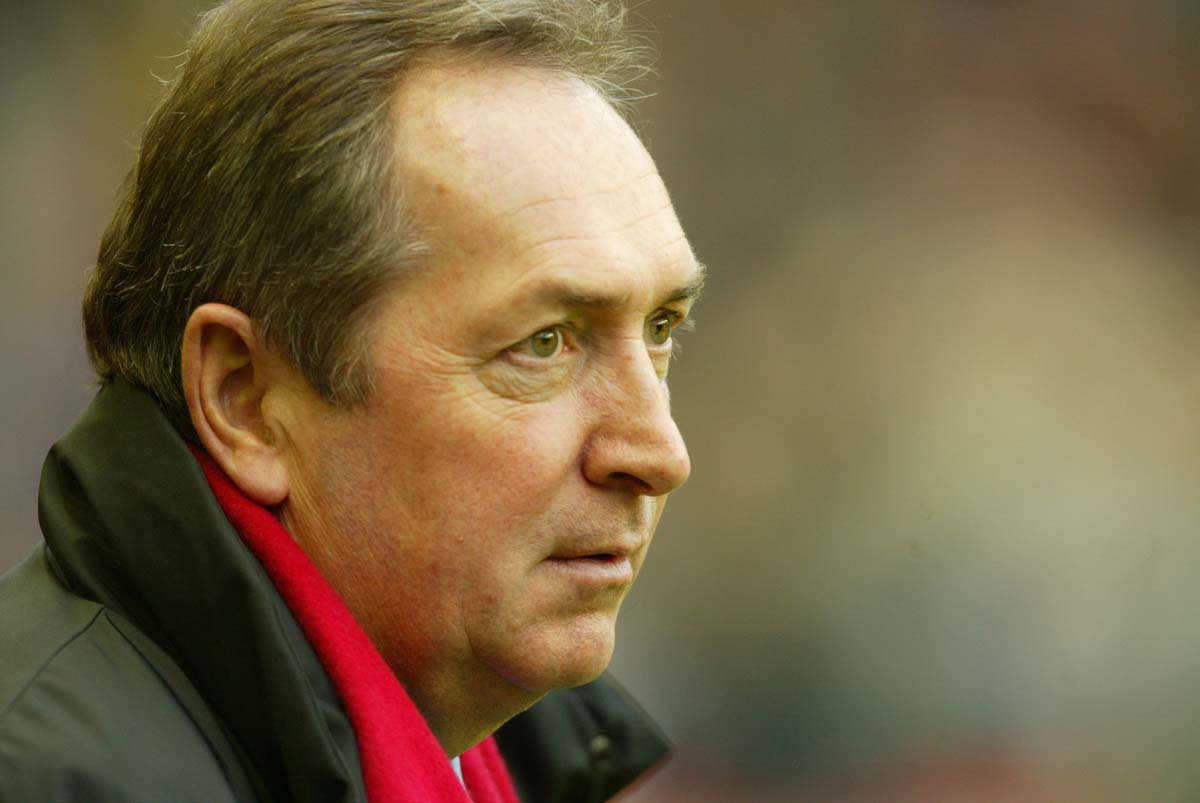 – “Gerard was really close to his players; at times it felt like having a father” – Steven Gerrard

– “ Gerard turned me from a boy to a man”– Steven Gerrard

– “I loved training under Gerard. It wasn’t as strict as I expected. The pattern-of-play work was enjoyable. The practice games were brilliant” – Steven Gerrard

– “Training changed as soon as Houllier arrived … there was no enjoyment allowed. It was fucking miserable” – Robbie Fowler

IT is generally accepted that no manager in Liverpool’s history has divided opinion as much as Rafael Benitez. But – as the above quotes from two of the club’s greatest ever players show – it was perhaps the Spaniard’s predecessor whose reign in the Anfield hotseat created the most contradictory opinions. Gerard Houllier – inspirational father figure to some, cold-hearted dictator to others.

The truth, as ever, probably lays somewhere in the middle and ultimately it boils down to the desire of any ambitious figure to do whatever it takes to be a success.

For Houllier, who became Liverpool manager in November 1998 following a brief and ill-fated stint sharing the post with Roy Evans, that meant ruthlessly discarding of those he felt would not contribute to the club again becoming a trophy-winning machine (i.e. Fowler) while nurturing those he could see were crucial to the team’s development (i.e. Gerrard).

The manner in which he treated Fowler was harsh, and even cynically underhand (the player talks in his autobiography of how Houllier used to brief against him to certain journalists while constantly praising the contributions of Emile Heskey and Michael Owen), yet, as Fowler admits, he is not the first person in football to be treated like a commodity – and he certainly won’t be the last.

But close to a decade since Houllier’s departure from Liverpool – a messy and undignified affair – it feels appropriate to assess whether the manner in which the 66-year-old treated Fowler, a player so adored by Kopites that most if not all rejoiced when he rejoined the club in 2006, alongside some of the other decisions he made as manager, tarnished his legacy among supporters. For sure there is a sense that given his triumphs, most notably the 2001 treble, Houllier is a surprisingly unloved figure across Anfield.

Take, for instance, a banner that has adorned the Kop since 2008. Created by Paul Gardner and based on a decades-old proverb, it reads “Success Has Many Fathers” and contains images of five Liverpool trophy-winning managers – Bill Shankly, Bob Paisley, Joe Fagan, Kenny Dalglish and Benitez.

Yet it has no place for the man who won three pieces of silverware in a single season. Gardner insists Houllier’s absence is not personal and instead down to a key element of the banner’s design – “Five [managers] fitted with European Cups” – and stresses that he has a great level of fondness for the Frenchman given his tenure as manager coincided with him first going to the match with his mates.

If anything, however, that makes Houllier’s absence from the banner even more striking – he greatly contributed to a supporter’s joy of watching Liverpool in the flesh yet still could not make it on to his material celebration of that very pursuit.

But, as stated, Gardner is far from alone among fans in maintaining a distinct level of detachment from Houllier and it is a stance which takes on greater curiosity when compared to the affection many supporters (certainly not all) feel for Benitez.

Yes, Rafa had Istanbul, but Houllier had Cardiff (twice) and Dortmund. Both are also matched in getting Liverpool to within one place of the Premier League title, as well as signing players of striking class and character – Rafa had Xabi Alonso and Pepe Reina, Houllier had Sami Hyypia and Didi Hamann. Yet while Benitez is viewed as a figure boarding on deity, his predecessor draws not much more than a polite smile from many of the same supporters.

Much of that could well be down to the manner in which Houllier discarded of Fowler in late 2001. He inherited the striker a couple of years on from his peak, and at a time when injuries were beginning to curtail his powers. Yet ‘God’ was cherished by the fans and clearly still had much to offer the side, as he showed when he did get a chance under the manager.

But the pair did not get on and, as Fowler bitterly outlines in his book, Houllier attempted to sell him on a few occasions before a £12million deal was finally struck with Leeds.

Given the No. 9 shirt soon passed to El Hadji Diouf (via Nicolas Anelka) it is little wonder that fans view the entire episode as a needless, upsetting affair and a huge black mark against the boss.

Allied to that are the largely cautious tactics deployed by Houllier and the sense that Liverpool had started going backwards by the end of his five full seasons in charge – “stagnating”, in Gerrard’s words – and it is not so difficult to at least appreciate the lack of love for the Frenchman.

His character also did him little favours – the former schoolteacher who patrolled Anfield’s touchline with a straight-back stance and glaring stare of disapproval, specs and side-parting often perfectly in place. If Benitez, with his wild arms and full-on assaults against Alex Ferguson, was Che Guevara, Houllier was more like Helmut Kohl.

Yet according to Phil Thompson, Houllier’s assistant during his tenure as Liverpool manager – and the man who stepped in for the Frenchman when he suffered a heart attack during Liverpool’s 1-1 draw with Leeds in October 2001 – it is that very streak of strict disciplinarian which should make him a greatly-valued and much-cherished figure among the faithful.

“The fans don’t truly appreciate what Gerard did for this club,” Thompson told me in December 2010, shortly before Houllier’s first return to Anfield as manager of Aston Villa.

“He worked tirelessly behind the scenes, rebuilding the team and wresting power from the players he inherited. That was his legacy – making Liverpool more disciplined, more professional, and that means more to Gerard than the trophies he won.”

There is little doubt that Liverpool underwent a significant transformation under Houllier. Out went a group of players who were either under-delivering on the pitch, such as David James, or causing disruption off it, such as Paul Ince, while in came a batch of recruits most people had not heard of but who would come to define a more professional, focused and continentally-minded chapter in the club’s history.

It can be argued that without the transfer business completed in the summer of 1999, when Hyypia, Hamann and Stephane Henchoz arrived at the club, Liverpool would have sunk into an abyss of midtable and trophy-starved mediocrity.

Liverpool became far stronger defensively under Houllier, with the team conceding just 30 goals during the 1999/00 season, fewer than any other Premier League side that year and 19 fewer than Liverpool had let in the previous campaign. It was this well-drilled defiance which formed the bedrock of Liverpool’s treble success of 2000/01, when with the addition of further smart acquisitions, most notably Markus Babbel and Gary McAllister, the side again had one of the best defensive records in the top-flight and in Europe kept vital clean sheets away to Roma, Porto and Barcelona en route to lifting the Uefa Cup on a heady night at the Westfalenstadion on May 16, 2001. The season of course ended with Liverpool also qualifying for the Champions League.

The following campaign saw Liverpool finish runners-up to Arsenal with a final tally of 80 points, then their highest in Premier League history and enough to have won a 19th league championship in four of the previous five campaigns. It was from there, however, that Houllier’s reign began to unravel, with Liverpool finishing fifth in 2002/03 on the back of a woeful round of summer spending. Mention Diouf, Salif Diao and Bruno Cheyrou to any Kopite now and they will either shudder or slam their fist on the nearest table.

By the end of the 2003/04 season Liverpool were back in the top four but it was felt by most that Houllier’s time was up. Sadly, the man himself didn’t see it that way and after a campaign characterised by excuses for why the team was struggling on the pitch, he had to be forced out the door.

Houllier, now working as a consultant for Red Bull Salzburg, the New York Red Bulls and RasenBallsport Leipzig, has admitted to making poor decisions in the final half of his time as Liverpool manager and reflected that he perhaps came back too soon from his heart scare.

That chapter in itself points to a man who, for all his faults, was fundamentally committed to making Liverpool a success; so much so, that it impinged on his health. Thompson for one will never forget what took place around lunchtime on that otherwise normal autumn Saturday.

“Gerard was lying in the treatment room with an oxygen mask around his face,” he said. “He looked terrible, but I held his hand and told him not to worry; just concentrate on getting better.”

Houllier underwent emergency open heart surgery for an acute dissection of the aorta and, after five months out of action, returned for Liverpool’s Champions League victory over Roma at Anfield in March 2002. To raucous applause, the then 53-year-old smiled as he made his way to the home dugout but did so in a noticeably frail condition. Houllier, quite simply, was not the same man.

The way it ended for Houllier will have particularly hurt him given his love affair with Liverpool did not begin on the day he was announced as the club’s joint-manager. It had, in fact, started some three decades previously when the then student moved to Merseyside from France in order to study for an MA.

Houllier grew to adore the area, and the club too, after watching Liverpool beat Dundalk 10-0 in the 1969 Fairs Cup – the team Shankly was building into a bastion of invincibility. That he eventually followed in the great man’s footsteps was, for Houllier, a dream come true.

His tenure could have gone better, and perhaps the Frenchman’s greatest failing was not bringing through more young players, which was part of his brief upon taking sole charge at Anfield and something of a surprise given, as the French football expert Andy Brassell says, Houllier was “the big driving force behind Clairefontaine”, France’s centre of excellence and the birthplace of their 1998 World Cup triumph.

He did, however, shape the careers of Gerrard and Jamie Carragher, making the former the captain in 2003 and turning the latter into a highly competent defender. Whether that makes up for his treatment of Fowler is up to individuals to decide. As ever with Houllier, it comes down to opinions.

“When Gerard arrived at Anfield he promised trophies, and he delivered” – Steven Gerrard

But Houllier was undoubtedly a winner during his time at Liverpool – a father of success, even though he, as Thompson states, “nearly gave his life just so he could make the club great again”.

As such, perhaps he does deserve more acclaim from the fans. A banner, maybe, or even just one more burst of “Allez, allez!”