WHY do you watch Liverpool? What really takes you to Anfield? A love of Liverpool Football Club? That’s the easy answer, but it’s not necessarily that simple when you scratch below the surface.

I was taken to Anfield by my Dad for the very first time just over 36 years ago at the ripe old age of three. It was for the European Super Cup second leg against SV Hamburg, who had a mercurial little imp of a striker that went by the name of Kevin Keegan in their ranks. They’d acquired him in the summer just gone, the summer of 1977. 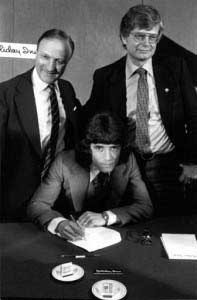 The 6-0 score line and the masterclass of a performance from Terry McDermott passed me by somewhat, and my abiding memories of that night centre around how cold it was, how small I was compared to the other people that made up the crowd of people outside the ground before the match, how suspicious I was of the polystyrene cup of black peas I’d been ‘treated to’ and how green the pitch appeared under the floodlights once we’d found our way into the ground.

If my bearings are correct, we sat high up in the Main Stand towards the Kop. I’ve looked the game up on YouTube a couple of times and it’s a strange experience seeing the footage knowing there is a little version of me – at that time younger than my own son is now – in the crowd.

In three-and-a-half decades a lot has changed. Three quarters of the ground has been renewed, we have players called Raheem, Kolo and Mamadou instead of players called Jimmy, Phil and Ray. We have a media department, a global brand awareness, superstores that knock out all manner of tat for an exorbitant mark up, Moneyball-centric American owners that puppeteer our club from plush offices in Boston (the Massachusetts variety rather than the one in Lincolnshire) and who ‘saved’ us from a near state of administration that our previous maniacal American owners were hell bent on driving us towards. 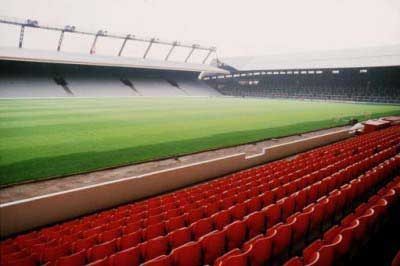 We’ve had highly public days out in the London high courts as legal suits and wigs did battle for the tattered soul of the club; we have an academy, a no-parking footprint around the ground that is roughly the size of Luxembourg and a family zone that peddles fast food vans and ‘fun’ kick-the-ball-through-the-hole Soccer AM style games.

We don’t win the league title anymore; we deal in package tour holidaymakers; we have Dunkin Donuts and Garuda signing as official partners during a transfer window when we’re labouring to sign players. We have the queasy element of the club using the ghost of Bill Shankly to voice the intro of the press conference to announce Garuda’s sponsorship of the club’s training kit and we have electronic advertising hoardings that sell things in Arabic tongue to a TV audience thousands of miles away.

They can watch Liverpool on their TV in a game that kicks off at 3pm UK time, while someone who lives a few hundred yards from the ground that either can’t get or afford a ticket has to watch via an illegal stop-start internet stream or hooky satellite box.

We have ‘photo opportunity’ life-sized pictures dotted around the outside of the ground for daytrippers and camera-happy tourists to pose with; we have information points and what appear to be air stewardesses stationed at the ‘posh nosh’ entrances – those parts of the ground for people that own a tie and get a printed team sheet to go with their free match programme.

We have arsey little South American players instead of arsey little Scottish players. We have our kick off times and days of the games moved on a regular basis and, above all else, we have to pay MASSIVE amounts of money to be a part of this circus. 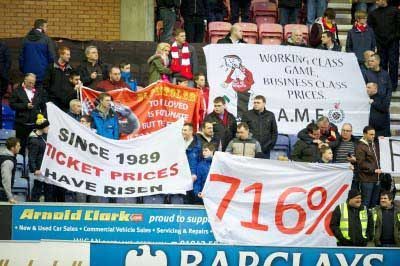 So it’s £850 or so for the season ticket. Tag on the auto cup scheme. Away games if you go to them and we have Arsenal taking us through the £90 barrier – the dawning of the £1-a-minute football match.

Add to this the cost of transporting yourself to and from games, feeding and watering yourself and a son or a daughter or your other half. Throw in a costly subscription to pay to watch games and it all means that for less than the price of a 38 to 50-game-a-season Liverpool FC habit you could probably run yourself a cheaper drug habit instead and still have money to spare for the associated attack of the munchies.

A return to European competition next season could mean 65 games. For the necessary outlay you would have enough for a spot of rehab thrown in for good measure.

Yet, even in the face of all this, you keep showing up, don’t you?

You would be well within your rights to proclaim the reason you keep showing up to actually be that easy and simple answer from the very first paragraph of this ramble – “for the love of Liverpool Football Club”.

But that love wouldn’t suddenly stop if you jacked in the physical act of match-going. I used to go everywhere following the Reds, but while I still take in the majority of home games, I only go to a small handful of aways these days.

While I once used to go tense across the shoulders and feel the need to breath in and out of a brown paper bag slowly at the prospect of not being at a Liverpool game, I now have a sense of ‘meh’ about the concept of missing a game. If I’m at the game, great, but if I’m not then I don’t lose any sleep. Yet I’m still gripped by the internal helter-skelter ride come kick off time wherever I’m watching the game, be it at the ground or in front of a TV.

Love of the club alone is not enough to propel you to pay out the prices you do, and put up with the thoroughly unappetising elements of modern football.

Let’s face it, if you hadn’t previously had a vested long-term interest in Liverpool FC but today found yourself in possession of new-found free time and some disposable income would you really take up the ‘pastime’ of watching a Premier League football club?

So what else is it that keeps you hooked? It can only be an emotional attachment to the matchday ritual as a whole, that sense that you’re part of something.

At it’s height for me it bordered on the realms of being an almost spiritual experience. And the people I shared matchdays with became a second family – a second family that I’d see some members of far more often than members of my actual family. 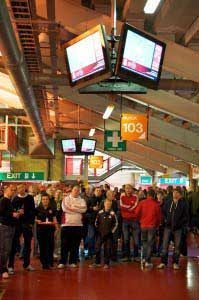 ALL TOGETHER NOW: Fans have traditionally had a sense of belonging at the match. Pic: Propaganda

We’d cram ourselves in a car and spend hours and hours in each other’s company. The extended version of this second family made the near biblical pilgrimage to Istanbul together. Better experiences in my life than that can be counted on one hand and with a couple of fingers to spare.

The emotional attachment makes the bond impossible to break. No matter what Sky Sports, American owners, demanding sponsors, greedy detached-from-reality players, and the hideous shiny Cyclops called the Premier League do to change the club we love, we still see the soul of the club as being the same as we’ve always seen it; that somewhere deep inside the Disneyland-style outer husk that is modern Liverpool FC remains a core that still beats to a different drum.

Combine that to the surroundings of L4 and all the associated memories they bring. Of games and glories, past, present and hopefully still to come, of the people you’ve shared those days with, people who are still with us and those who aren’t. The ghosts that surround us at Anfield are friendly and comforting ones, and we like to revisit them.

That sense of belonging can still creep through the sight of the increasing number of unfamiliar faces you see outside the ground before games now. It’s easy to say we keep coming out of habit, and yes there is a degree of habit to our continued presence, but we’re compelled by an unseen umbilical cord, or more likely a retractable dog lead which drags us back over and over again.

I’m always genuinely warmed by the sight of friends old and new prior to games; it always feels like I’m coming home. Liverpool FC and Anfield has been part and parcel of my life for as far back as I can remember and my relationship with them has outstretched that of most of the people to have drifted in and out of my ‘journey’ through human existence.

It’s meant more to me than a lot of the people I share my DNA with, but I’m also increasingly repulsed at the way my view of the club I love is being distorted. The Disneyfication of Liverpool FC only succeeds in loosening my grasp on what I once felt was an entity I owned a part of as much as it owned a part of me.

I’ll never completely let the club go; it is after all still Liverpool Football Club. Just not as I knew it.