DREAMING OF A BRIGHT CHRISTMAS 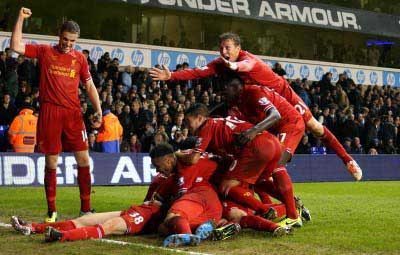 DO we dare to dream now? It’s been a strange season so far. While Liverpool have been racking up results, briefly topping the table and maintaining a top four spot throughout, nagging doubts have remained about whether the attempt to finish in the Champions League spots for the first time since 2009 will end in tears yet again.

First, it was the fine margins; the saves, single-goal victories and convincing performances that rarely stretched upon half time, with questions raised over the fitness of players and their ability to truly control a game.

Then there was the fragility away from home, an over reliance on the goals of Daniel Sturridge and Luis Suarez and a midfield that had rarely convinced as a unit, either defensively or going forward.

The strength of the squad, the suitability of signings and a manager that during his Anfield reign had chalked up just two victories in 15 against the so-called top sides (both at home; Spurs and Man United) also added to the doubts that lingered despite promising results and a heartening league position.

The quality of the opposition was also a consideration. Liverpool have frequently been branded flat-track bullies this season and it’s easy to see why. The Reds’ record against the bottom half of the table currently reads played nine, won eight, lost one. It’s the best record against bottom half teams in the league right now with a string of the poorer sides being convincingly steamrollered at home in a welcome return to the days of Fortress Anfield.

But, prior to the Tottenham game, the record against the top half of the table was much less convincing – reading played six, won one, drawn three, lost two.

For those reasons, the game at White Hart Lane – a ground that had not witnessed a Liverpool victory since 2008 when Voronin and Torres were on target in a 2-0 win – was massive for the season, for Rodgers, for the club and for the mood of the fans.

Five-nil then, was Christmas come early for everyone. Well, everyone except Andres Villas Boas. Soz about him.

So good was the Liverpool performance on Sunday that almost every question was answered in the space of 90 minutes. It was a game that saw Rodgers’ philosophies come to life at last – quick passing, pressing, relentless workrate; all contributed to the most convincing performance away from Anfield in the manager’s 18 months in charge.

Hugo Lloris plucked the ball from the back of his net on five occasions but it could and should have been more. Liverpool were rampant. Man of the match Jordan Henderson revelled in the chance to take centre stage in the absence of skipper Steven Gerrard, adding raking first-time passes, individual skill (backheeled nutmegs anyone?) and a first league goal of the season to his usual relentless running while Joe Allen, who could easily have sank into his shell after the mojo-sapping miss at Goodison Park, continued his recent revival as he knitted the play well in another confident performance.

Lucas, too, looked more comfortable with his role – the mobile trio comfortably dominating midfield in a game in which many, myself included, predicted they would struggle to take a hold of against physical opposition.

Jon Flanagan scored his first for the club – and what a strike – in one of Liverpool’s most joyously celebrated goals in recent years  and Raheem Sterling was deservedly on the scoresheet too as he, like Henderson, added end product to his usual energy and promise.

All of a sudden a squad that at times has looked stretched and devoid of creativity and goals now appears increasingly full of options as players gleefully seized second chances. It’s easily forgotten that it’s only a matter of weeks since Flanagan and Sterling were being touted for loan moves away from Liverpool.  Now they are assuming the role of key contributors.

The big-team away day hoodoo was well and truly destroyed on Sunday and now festive trips to Manchester City and Chelsea suddenly look a lot less daunting. Confidence is high, Luis Suarez is seemingly unstoppable and Philippe Coutinho still looks like he’s got another gear to find. Any kind of result at either ground will be a huge boost.

And all this without Daniel Sturridge and Gerrard. Much has been made of the captain’s absence at White Hart Lane but finding a role and use for a player with his ability still remains a problem most managers would love to have. Perhaps he should be used more sparingly, in a different position or even from the bench. Whatever, if your side is blitzing a side tipped for Europe 5-0 in their own backyard, it’s a conundrum to ponder another day.

A win against Cardiff on Saturday at Anfield will put Liverpool top of the league with 17 games played. Can we dare to dream? There’s a long way to go and questions remain, not least whether the transfer committee can deliver more convincingly than it did in the summer come January when rival teams are sure to strengthen too.

But with Manchester United being pulled from their plinth by David Moyes’ mediocrity, Tottenham now managerless, Chelsea unconvincing and even Man City suffering jitters away from the Etihad, what price a young, hungry and confident team with the sprinkling of stardust that Suarez provides and a home record to envy?

It might be a little early to dream of top four and more but plump the pillows and turn the light off. This is the best chance we’ve had for years.