SO the transfer window to end all transfer windows has slammed shut for another four months. “Good riddance” come the cries from the merry folk; time to talk about the actual football – I mean, that is why we’re here, right?

In the olden days, before the off-season became a soap opera haven for transfer gossip, ITKs and 24 hour news channels, clubs would be left alone to build ahead for the coming season. New players would invariably arrive, and some would depart.

The essentials remain the same however, six weeks of pre-season preparation are designed to ensure the team does not stand still; that it improves on the season that preceded it.

Last year whilst Liverpool played some good stuff and scored a shed load of goals, they failed to make much of a meaningful impact in either the league or the cups, and fell short of producing a significant run of form. Everton, for once, started brightly but tailed off alarmingly after Christmas before rallying towards the end, with an overriding sense that they finished as high up the Premier League table as they possibly could have.

Liverpool’s summer has been about targeting players to fit systems and plans that are being perfected on the training pitch; however ad hoc and meandering that process has appeared from the outside. It has, up until the final few days of the transfer window, focused on how Liverpool are to score goals, rather than stop them going in. 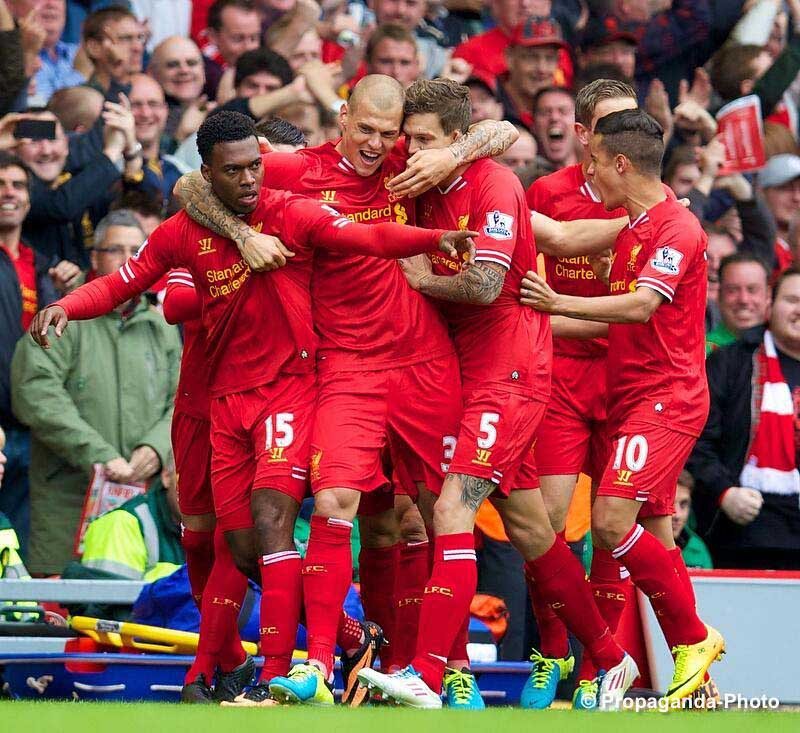 Hop across Stanley Park and you see a familiar story. New Everton manager Roberto Martinez finds himself in a similar situation to his counterpart Rodgers as he attempts to instill his way of playing to the Goodison club. He has been afforded a kinder run of early season fixtures than the then new-Liverpool manager was granted 12 months ago, and his distinct style has been easily distinguishable in The Toffees’ first three league games.

To ease that shift in style he moved swiftly early in the window and has invested exclusively in his old club Wigan Athletic. The deadline day acquisition of James McCarthy strikes more than a passing semblance to Brendan Rodgers’ move to bring his own ideological foot solider Joe Allen to Anfield 13 months ago. How McCarthy will cope with shouldering Martinez’s ethos and transmitting it to his new teammates will prove one of the Spaniard’s greatest challenges over the coming months.

Up front is where most of the excitement surrounding Everton this season is generated; Romelu Lukaku is more of a battering ram than a target man, but it is his capture of Barcelona B starlet Gerard Deulofeu on loan that has aroused most interest. It has been widely accepted that Martinez’s presence at Everton was pivotal in the transfer, and when you consider David Moyes’ transfer impasse at Old Trafford a revised perception of previous summers at Goodison emerges.

The club’s monetary deficiencies have been both readily established and popularly disseminated, but they have not moved so prolifically and so quickly in the transfer market since 2007, when Phil Jagielka and Leighton Baines were acquired for a combined £10m by the first week of August.

Moyes was hamstrung by shoestring finances at Everton, but this often obscured a profound inactivity in the transfer market – perhaps a result of his lack of bonafide big money success signings; of all those he spent significantly on, only Marouane Fellaini could be considered a resounding success.

Martinez has already displayed his canniness in picking up the virtuoso talent of Deulofeu, a signing that you’d be forgiven for thinking Moyes would struggle to pull off, the same way he shirked in bringing Thiago Alcantara, Cesc Fabregas and anyone else of an exotic imagination to Old Trafford this summer.

Over in L4, another Barca B starlet from last year, though a Sevilla player, Luis Alberto has been slowly assimilated into first team plans. Though a less explosive talent than Deulofeu, he appears more adaptable between midfield and attack, a trait that will no doubt have been a result of his stay in Catalunya, and that fits with the fluidity that Brendan Rodgers has sought after.

The presence of two young Spanish prodigies, schooled in La Masia, is evidence of the positive footballing attitude that is now coursing through Merseyside. It’s a far cry from the disastrous summer of 2011 – Liverpool’s woes from then are well documented, though in Jordan Henderson they acquired someone who now encapsulates the ethos that Brendan Rodgers demands – when Everton had just the loan signings of Royston Drenthe and Denis Stracqualursi for their efforts.

The two Merseyside managers are the pair who seemingly went head-to-head for the Anfield job in the summer of 2012, and who have garnered such widespread praise for the impact that Swansea have made on the Premier League in the past two seasons. Until Wigan’s unlikely FA Cup triumph in May, neither had won a major trophy in their managerial careers and yet had gained reputations amongst the finest young managers in the game.

It is emblematic of football’s modern obsession with beauty; or specifically a philosophy that emphasises ball retention as the base of attacking play.

With David Moyes, and his style of play which centred around the marauding runs and exquisite delivery of a left-back, now seemingly jettisoned for more patient team build-up play, Everton’s 2013-4 will mimic Liverpool’s 2012-13 as the squad and supporters adapt to shifted requirements and expectations. Against Norwich they dominated possession and created more goalscoring opportunities, but have been a little more prosaic against Cardiff and West Brom – two teams who generally won’t allow you to play through them.

It could be argued that Brendan Rodgers’ debut season at Liverpool was fundamentally about improving the squad as a team of footballers, before improving results and determining progress. Twelve months ago they made their worst start to a season in 100 years – now, their best since 1994.

The Liverpool that ground out a monumental 1-0 victory over Manchester United displayed the kind of needle that has been lacking since the days of Benitez; it was the antithesis of that laborious September afternoon in 2012 when they capitulated 2-0 to Arsenal. Rodgers has learnt to be more pragmatic, but that has not been to the detriment of the team’s play – they will still look to steamroller the league’s cannon fodder, especially when Luis Suarez returns to the fold.

Whilst both sides may lay claim to be amongst the most attractive of footballing teams in the country throughout the coming season, it may come at a predictable cost. The managerial duo were scarred last year by worrying defensive frailties which saw them leak a combined 116 goals last season. Early season indicators would suggest they have been ironed out to an extent, but when viewed from a wider prism and an overwhelmingly defensive, low-scoring start to a new season, the figure of 5 clean sheets out of their combined 6 league games feels like an anomaly.

Everton have defended stoically in recent seasons, but who’s to say that Phil Jagielka won’t undergo a Skrtelisation when asked to play the ball out of defence, having been so tuned to aim for the cumbersome shoulders of Marouane Fellaini?

Though Liverpool have been resolute, rugged and dogged in defence, three consecutive clean sheets is testament to that, it belies a worrying tendency to drop deeper and deeper as a match unfolds; sooner or later something is going to give.

With a tantalising forward line of Suarez, Sturridge, Coutinho, Moses, Aspas, Ibe and Sterling, last season’s tag line as flat-track bullies will prove hard to shift. The non-transfer of Suarez has rightly been hailed as the defining point of Liverpool’s summer; but more important is the stability at the top of the squad as Brendan Rodgers enters his second season, the first Liverpool manager to do so since Rafa Benitez in 2005.

What the club’s respective summer activities demonstrate is the transformation of their attitudes in the past 12 months; ambition courses through the pair of them. Everton may well slip out of the top 6 under Martinez this season, but the evidence is there that they are building towards a future with some technically excellent footballers – under Moyes it often felt as if they were just going through the motions.

Simply put the club is in a better position now to build for the next five years, than it was just 12 months ago, or even at any point in the past five years; a new manager is signed up with a refreshing mentality and the beginnings of a talented young squad. Their Liverpudlian neighbours, themselves gripped by inertia in recent times, have enjoyed arguably their most successful summer window since 2007 and still end it with a tinge of regret and thoughts of what might have been.

The days when Merseyside could lay claim to house the finest sides in the land are long gone – it is debatable whether they will return – but it will house some of the most attractive and progressive football in the land, and that should be something to celebrate. The success, at least on the face of it, of their summer acquisitions testifies to that, now is the time for the hard work on the training pitch to dictate the ebbs and flows of the new season.