*DISCLAIMER – I GOT A D IN GCSE MATHS AND TAKE NO RESPONSIBILITY WHATSOEVER FOR THE ACCURACY OF THE CALCULATIONS. SOZ.

**Serious for a second, any obvious mistakes, please let me know and i’ll happily correct them, but every effort has been taken to ensure accuracy.

NUMBERS? I FUCKING HATE THEM.

Stats, forecasts, percentages, bank statements (Especially bank statements), no, sorry not for me, far too deceptive, horrible little things, as the cliche goes, you can prove anything with stats and if my Auntie Joanne had bollocks she’d be my Uncle Joe, but she isn’t, but I bet you could grab some numbers to make it statistically probable.

With that out of the way, why have I spent the a fair portion of the morning bouncing numbers around a spreadsheet?

Well, mainly because i’m a bore, but also because I think its interesting to challenge perceived wisdom, especially when it comes to our much beloved togger and in particular Liverpool Football Club and Athletic Grounds Limited and its seemingly ever lasting grind towards a stadium solution.

I noted with curiosity quotes attributed to our Principal owner, Mr John W Henry, in regards to progress with Fenway Sports Group’s preferred option of ‘rebuilding’ Anfield having jettisoned any plans to build a new facility, written off and thrown on the scrapheap.

Henry, referring to the now abandoned plans of our former owners said: “They [Hicks and Gillett] were talking about going out and borrowing an enormous amount of money for an enormous facility. That’s not what we are doing here. One of their problems is that they weren’t able to get financing.”

Why Henry chose to speak out over the issue under seemingly little pressure to do so is his business, but having had a look at the numbers, Henry has a point, especially when it compared with the cost of redeveloping Anfield, but as with most things, scratch away a little bit and speak to people who have an idea what they are talking about and everything isn’t quite so black and white.

Having taken all the figures available and best guessing others using other examples, I had a little play around with some numbers and the results, to me at least, were interesting.

First off, I looked at the potential costs and benefits of redeveloping Anfield. 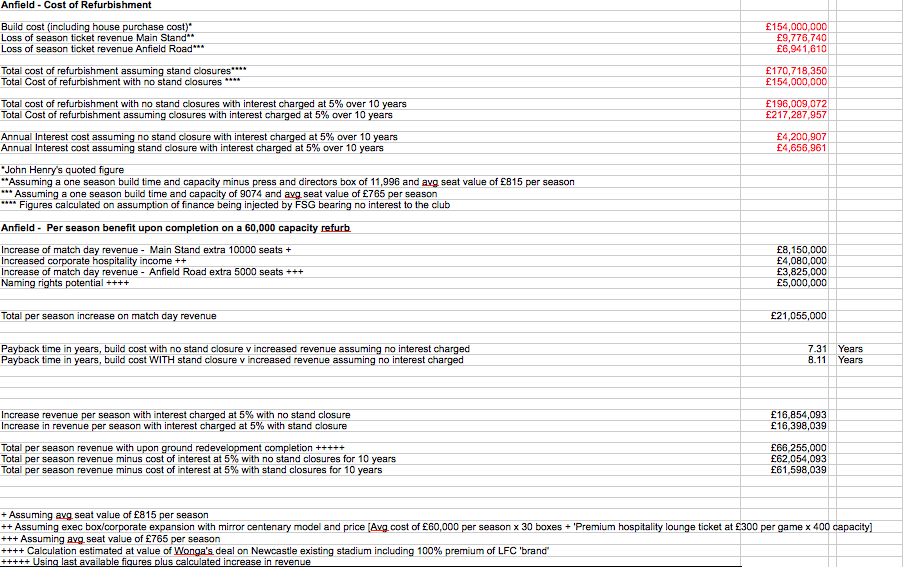 As the financing and actual plans for the redevelopment aren’t currently available, I included figures for a rebuild using both a financed build and an FSG funded build, both scenarios showing a healthy increase in per season match day revenue with seemingly very little risk, a no brainer, especially when compared to the cost of a totally financed new build, which I costed below, again, using cast iron figures when I could a researched estimates when I couldn’t.

Using the 3 year build period of The Emirates as a guide, you can see, even with a 65,000 capacity new facility the build costs are crippling with the club actually making over £12m less over the 10 year financing period that we are currently at Anfield mainly due to the crippling build period with no income to speak of, it is also very doubtful whether FSG would find a willing lender to finance the project 100%.

Whilst in the long run it’s clear that the benefits of a 65,000 new facility are far greater than a redevelopment, with more scope for corporate spend, greater impact and jobs in the local area, the chance to be the symbol andkey driver of a massive and long overdue regeneration of the local area, a chance for the club to build a football village with its own bars, restaurants and hotels and a more comfortable stadium for supporters which could be the pride of Europe, and most importantly, having the capacity to enfranchise the next generation of supporter with reduced tickets for kids and families long priced out of going the game.

But a simple glance at the figures show that such idealism is foolish and beyond our means.

What Henry failed to mention when he spoke of Hicks and Gillett was that massive borrowing to build wasn’t an absolute necessity, indeed, whilst it was Tom ‘Mr Leverage’ Hicks weapon of choice, having looked at Arsenal’s model for building the Emirates, whilst it may be a partial necessary evil, its not the absolute be all and end all.

One option open to FSG would be to redirect the £154m earmarked for the Anfield redevelopment and pour it into the new build, not only does this, on paper at least, take a massive slice out the cost of interest charged for building the facility, it brings the total cost of the stadium down by over £110m, saving over £26m a year in interest. 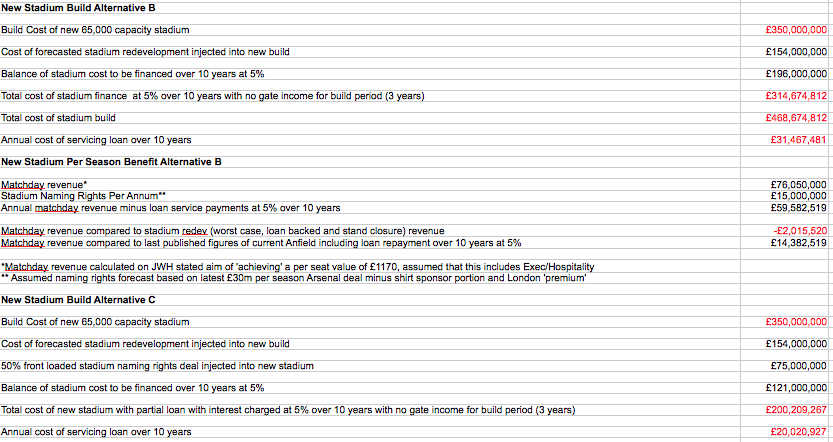 Despite this, and the obvious end benefit once finance is paid off of a match day revenue of over £76m as opposed to our last currently available published figure of £45.2 million, the new facility would, to the tune of over £2m, be less beneficial that the proposed redevelopment as detailed above regardless of the more beneficial long term benefits, it is also worth bearing in mind there is also no added income from any additional ‘outside’ revenues such as bars and leisure facilities included which, you would imagine, bridge the gap.

Another option, and one Arsenal used to their benefit, is to take advantage of a ‘front-loaded’ naming rights deal, where a naming rights partner would advance 50% of a 10 year naming rights deal into the club, reducing the need for finance even further, obviously finding a partner that is happy to front such an amount for a project that they won’t see open for 3 years presents its own challenges but, as Arsenal have proved, is not impossible.

By using such a mechanism, the money lost per annum through the front loading is saved on interest payments and also further reduces the risk to the club financially, brings the overall cost of the stadium down another £39m and and reduces annual interest by a further £11m to £20m as well as nudging past the forecasted income of a refurbished Anfield even during the loan bearing period.

The big question, assuming FSG have the facility to inject that kind of capital, is whether they are serious enough about their investment in Liverpool Football Club as a commitment on such a scale would be reflected in the value of the asset (ie the Club) once the stadium is built.

As ever, its easy to sit and hypothesise from the freedom of a couch of a Sunday afternoon without knowing the exact ins and outs of Fenway Sports Group, its ambitions and indeed the international money markets and it goes without saying that any move forward is welcome but their next move is this regard is likely to shape the club long after they are gone.

With this is mind, would it unreasonable to expect them to put all the options on the table and let the fans have a say as opposed to conveniently timed sound bites and glossy prospectuses pushing a refurbishment as the only solution?

Only then can we judge for ourselves whether the numbers add up.