IT’S not easy being a Liverpool fan. We’re given all too brief glimpses at genius and lots of pillow talk from footballing geniuses before they’re whisked away by promises of trophies, wages or ‘better prospects’. The symbiotic relationship becomes frayed and, like anyone who has fallen in love only to be repeatedly left for another, we become more tentative about committing again. Several times bitten, several times shy. Keegan, Owen, Torres and possibly our current number seven. Sometimes you just need stability. Sometimes that stability is just taken for granted and you forget why you adored them so much in the first place. I’m guilty of that about one man in particular. Steven, I apologise. 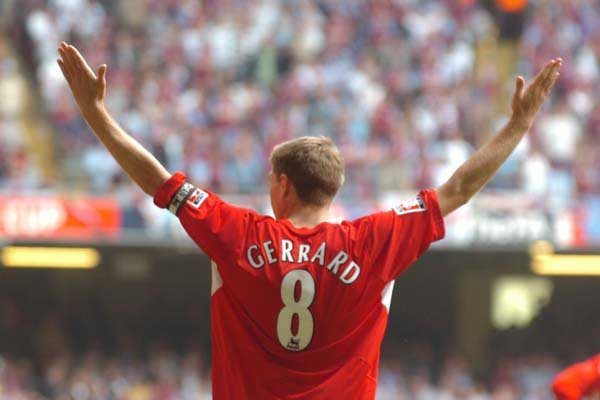 In 2006, if you recall, Steven Gerrard scored two late goals in the FA Cup final. It took us to extra time and penalties and ultimately to another trophy. To this day it’s referred to in some quarters as ‘the Gerrard final’. That might be a bit harsh. Pepe Reina did a bit too and Djibril Cisse scored one of the greatest Cup Final goals – a strike that stands next to Jimmy Case’s in the ‘great but forgotten’ category.

There’s a little back story to that game. Gerrard had just become a father for the second time and although he wasn’t walking the corridors of the Cardiff hotel at 4am frantically burping his daughter, he was way behind on his eight hours quota. He later claimed that during the game his eyelids were practically held up by matchsticks. It didn’t stop him scoring two incredible goals. That’s what Steven Gerrard does.

A few months later Sky filmed a documentary about a year in his life. It was the usual nonsense of driving to training, getting ready for England, hanging around with his mates etc and did its best to pull the smallest beam of the ‘banter’ from his seemingly curmudgeonly exterior. These things are usually cringeworthy, embarrassing at best, and, as ‘Being Liverpool’ demonstrated, show the zit scars on an otherwise perfect complexion despite being edited and over PR’ed to death but this one was a little bit different. This one had us watching a man, who didn’t want to be filmed, being filmed. All the time. In parts of his world that he kept secret. There were dozens of little ‘are you still here?’ sidelong glances to the camera and those frown lines he’s had since his teens deepened further. His body language begged for release as he clearly doesn’t find himself worthy of intense inspection.

It made me love him the more.

Those born of greatness and are pregnant with glorious, miraculous possibilities tend to express their successes in different ways. Fowler dreamed up a hundred goal celebrations, Muhammed Ali liked to run around the ring with his gob hanging open while Gareth Bale likes to do whatever that stupid signal means. Steven Gerrard likes to celebrate with his team mates and then look ashamed, nervous that he’s gone over the top and been a bit flash. He hasn’t. It’s just an example of his humility. A smile, a high five and then a self-conscious frown almost as if he’s berating himself. McManaman went the other way with a nonchalant raised finger and drooped head. That infuriated me. You’ve just scored a goal for Liverpool Football Club, son. It’s alright to smile. Don’t act like it’s beneath you to look happy. If he could have worn sunglasses he would played looking like the third Blues Brother. Celebrate, for fuck’s sake.

One other thing the documentary showed us is that you don’t have to clean your entire pool if you can lift baby vomit out with your hands in one go. It was nothing if not educational.

To be blessed with all that talent, all that drive, all that commitment and still look a bit embarrassed is a rare and noble thing but the modest part of his nature has been questioned, erroneously in my view. His goal celebration against Portsmouth in 2004 which led to the ‘Stevie Me’ moniker was antonymic to his true nature. He wasn’t celebrating the fact that he was miles better than anyone else, it was a sorry reflection at the paucity of ability in that team, that squad. He wanted more players like himself and the stabbing of his chest was born solely of frustration rather than any egotistical hurrah.

He still brooked criticism, difficult not to after 15 years at the same club, and the Chelsea dalliance and the subsequent horsewank about gangster threats followed him around like a bitter cab driver’s fart. Personally, I’m not bothered by that episode. Had he come back and looked like he didn’t give a toss and ran his contract down then there would have been ample cause for complaint but he didn’t. He came back from all that and delivered the 2006 season. That’ll do me. Offers later came in but he remained in L4. Today he mentioned that Bayern Munich offered him a deal less than a year ago but he’d rather stay with the one club where he’s happy. He stayed true despite the current meagre position of the club and the ‘grass is greener’ offers elsewhere. Luis.

Some say the club isn’t good enough for him. Put a Talksport or equivalent shock jock in the same room as a Steven Gerrard discussion and you’ll hear a whiny diatribe about how Liverpool ruined his career by keeping him and not letting him go when he was in his prime. They don’t understand. Gerrard derives an intense satisfaction from playing for and captaining his local side. That means something to him. The latest tit to shudder with faux indignation about Gerrard’s loyalty seems to have forgotten that he’s won every honour in the game save for the League and, and this is important to him, captained his country while doing so. What he really means is that he has principles in an age where such things are shunned or dismissed as sentimental. I’ve looked for similar articles on Matt Le Tissier, a man who achieved less but wanted to stay in a place that meant something to him, from this monosyllabic shouter but he was too busy being appalled by anything that would fill a column that day. As Bernard Black once observed, whores must have their trinkets.

The post Istanbul confusion didn’t take the polish off the day itself. He was incredible in that game. Scoring one, winning a pen and then playing emergency right back when needed. Come the end of the game he praised his goalkeeper and manager and failed to mention that it was his goal that started those six insane minutes. No Stevie Me there.

As Rafa and the 2009 season came and went and the quality of the team and squad decreased by degrees he stuck to his guns where others ran off to the continent or richer suitors. Steven just signed his contract and went along with his business. This had nothing to do with comfort zones – he just sets the standards. When a Sky journalist told him that the current crop of youngsters are ready to step up and be counted as Liverpool players he replied a smiling ‘do you think so?’. I love that. It’s too easy a trap to fall into. It’s all about hard work and the need and desire to improve rather than thinking that you’re good enough just because you get the odd first team game. That’s the attitude we like to see. There’s an extra 5% somewhere that needs to be mined and you’ve got to work your arse off until you get to it. He himself is living proof of that. As a youngster he was brilliant if a little reckless. By his mid twenties he was just about the perfect player. By 2006 he was arguably the best midfielder in the world and he got there by growing from that cheeky scamp who ran along the touchline at Goodison with his tongue out and into a better more consistent player with a better more consistent haircut.

We’ve all got our favourite Gerrard goals be it the Southampton home game, the Goodison strike, Istanbul, the Marseille away goal, the United home goal from 2001, the City goal from last season, the Cup final goals, the Everton hatrick, Olympiakos, Inter Milan, Real Madrid (Jesus, I love that one) but for me THAT Middlesbrough goal is frightening. It’s going wide twice in a manner of seconds but still manages to come inside at the last minute. I still don’t know how he did that.

Then there’s the passes. Two against Arsenal for Camara and then Riise, the ball to Murphy for his second Old Trafford goal and his partnership with Torres in that Newcastle game. There are hundreds more.

Is he Liverpool’s greatest player? Well, Souness was the best central midfielder I’ve ever seen thanks to an ability to drag Liverpool through games by the mere force of his will and Kenny Dalglish is…well, there are no words to describe Kenny Dalglish other than slightly higher that the highest compliment you can think of but Gerrard is certainly a contender. Ray Kennedy, a man who played with two of those men, thinks that Gerrard just about outranks them. That’s a bold statement and the fact that it’s not a preposterous one reveals just how special a player he is. It’s difficult to see past the ex-players who won everything but in ten years time Gerrard’s reputation will increase with hindsight.

The current question is where do Liverpool play him now? Deep next to Lucas? The number ten role he occupied in his great season with Torres? Up front? (He’s still one of the best finishers at the club even though the legs aren’t what they were) Centre back? I’m not sure. Just make sure he’s on the pitch. Just make sure he’s in everyone’s ear. Just make sure that he’s the benchmark of what is and isn’t acceptable for this club. Just stop him taking corners.

I’m too old for heroes, too old for them when he made his debut if the truth were known and I’ve been let down by many when they’ve opened their mouths or written dull as ditchwater autobiographies that bang on about ‘dressing room banter’ but for me Gerrard and Carragher are the last in an incredible litany. It’s not just the ability, it’s the way they carry themselves. Nothing flash, nothing over-exuberant and nothing, well, interesting. When Hicks and Gillet met them prior to the buyout they tried to make out that they were two zany characters (‘something along the lines of ‘Whooh! Those guys!’) when they are anything but. They’re no nonsense men. I like my heroes like that.

One thing’s for sure and that’s the day when Steven’s withering look is no longer seen at Anfield will be a very sad indeed.

Thanks Steven. Thanks for all that and thanks for not being a knobhead. These things matter.