Sterling can prove his value

NOT for the first time in Liverpool’s recent history, a summer that began with hope is unfolding against a backdrop of pessimism and despair. Players have arrived yet the star turn (Luis Suarez) could well be off while the key target (Henrikh Mkhitaryan) has slipped into somebody else’s grasp. As the new season draws ever closer, there is that familiar sound of backward steps characterising the club’s momentum.

Yet amid the gloom one player at least should sense an opportunity for progression. Having disappeared from the fray at the end of last season and, subsequently, the minds of many supporters, Raheem Sterling is well and truly back. 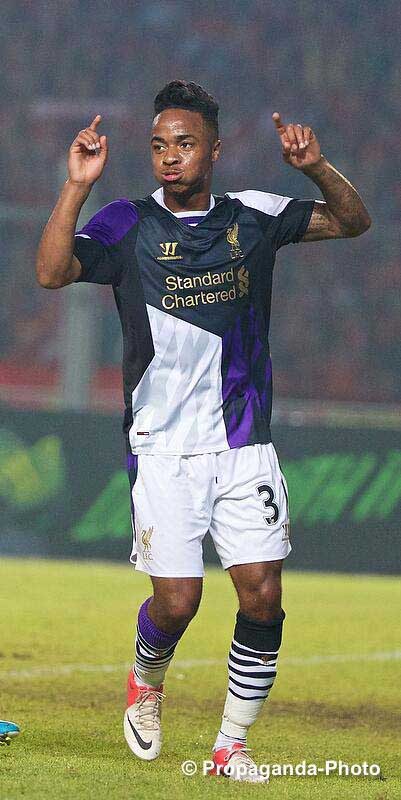 Sterling celebrates his goal against an Indonesia XI in pre-season. (Pic: David Rawcliffe)

The winger has enjoyed a productive pre-season, scoring twice in three appearances – against Preston and an Indonesia XI – and displaying the talents which, a year ago, had his name on the lips of most Kopites. The 17-year-old was earmarked as the next big thing and did not disappoint when pitched from the start for the visit of Manchester City on 26th August – Brendan Rodgers’ first home league match as Liverpool manager.

Sterling went on to feature in 22 consecutive league games, scoring two goals and, amidst it all, received a call-up to the senior England squad, making his debut in the 4-2 defeat away to Sweden on 14 November. The kid with the flashing pace and swaggering hips appeared to have the world at his feet.

After the initial burst, however, came the deflation. As the player visibly and understandably tired in the new year Rodgers decided to gradually pull him out of the spotlight. Starts were replaced with substitute appearances, with the last coming in the 2-1 victory at Aston Villa on 31 March. Soon after, the teenager aggravated a thigh tear which curtailed his campaign and ruled him out of England’s ultimately doomed European Under-21 Championship campaign.

Rest and recovery may well have been what Sterling needed after a whirlwind season, one in which he instantly went from teenage prodigy to first-team regular, a dramatic shift which would leave any player feeling mentally as well as physically exhausted. Yet as the player, now 18, returns to the fore – he was back in pre-season training at the end of June, four days before most of his team-mates – there is a feeling that it is less a case of Sterling catching his breath and picking up from where he left off and more of him, for a second season in a row, proving his worth to the side.

Sterling is not to blame for this situation. He did not ask to be pulled out of the side at the end of last season, nor did he wish to pick up such a serious injury. It also did him few favours to see Philippe Coutinho make such an immediate and eye-catching mark upon his arrival from Internazionale in January. Suddenly, Liverpool had a new gifted young thing.

Collectively those factors have combined to push Sterling into the shadows and it is surprising how little he was mentioned in close-season discussions regarding the shape of the team. Everyone, of course, has their own view and no doubt there are many who see a role for Sterling, but the general consensus appeared to be that Liverpool would line-up in a 4-2-3-1 formation with a possible attack trio of Iago Aspas (who has also impressed during pre-season), Coutinho and, if he remains in situ, Suarez playing behind Daniel Sturridge. Had he signed then a place would also have had to be found for Mkhitaryan, with the Armenian possibly filling the No. 10 role and Coutinho shifting out wide. Then there is Jordan Henderson, who excelled on occasions in that very role, and even Stewart Downing, who some fans feel deserves a starting place for his ability to naturally hold a wide position. Combinations galore yet few containing Sterling.

For his part, Rodgers is sure to insist Sterling remains very much part of his plans – and even more so now – but the arrival of Aspas, the seemingly substantial links with Christian Atsu and the excellent performance of Jordan Ibe against Queens Park Rangers on the final day of last season only added to the swill of uncertainty surrounding his future prior to Liverpool’s summer tour.

Even now, there is talk of Sterling going on loan next season but that would be a nonsensical move. The player has proven he can cope at the highest level and so is likely to learn very little from a spell at a Championship club, or from going to West Ham, where he would more than likely be instructed by Sam Allardyce to ditch his skill and nous and simply launch the ball into the area as soon as possible. No, Sterling needs to stay put.

Doing so would only aid his development, which statistics prove to be an ongoing process. According to eplindex.com Sterling attempted 718 passes in 1,748 minutes played up until March with 607 of those, or 85%, accurate. He is, then, comfortable in possession – a key trait of any player wanting to make it in a Rodgers side – but less adept when it comes to crossing, with the player having attempted only 52 in 24 matches last season, with only 15% of those accurate. Sterling also created only 37 chances during that period, which compares unfavourably to Coutinho’s 20 in half the number of matches. 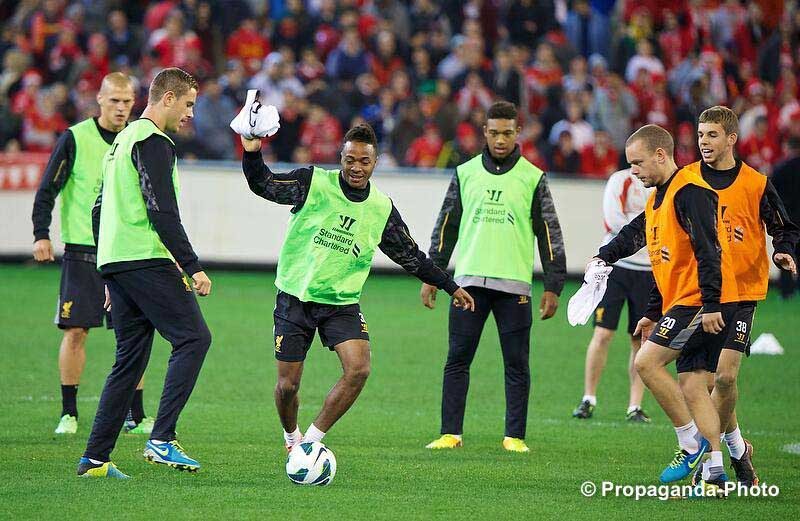 He clearly has the talent to improve those areas of the game, with Frank McParland, Liverpool’s academy director and a man who has known Sterling since he arrived in Kirkby from Queens Park Rangers at the age 14, describing the player as “intelligent”, “hard working” and possessing a “real determination” to push himself. There is, in other words, much more to come.

And that is important from a wider point of view. It remains the case that the last Liverpool youth product to fully establish himself in the first-team was Steven Gerrard, with the club captain making his debut in November 1998. Since then there has been one hopeful after another – including the likes of David Thompson, Stephen Wright, Jon Otsemobor, Danny Guthrie, Neil Mellor, Stephen Darby and John Welsh – who have tried but failed to make the grade. This is a systematic failure which cannot be allowed to go on, especially in the era of Financial Fair Play, and in fairness to the club huge strides have been taken in recent years to structure the academy in such a way that more players are capable of stepping into the first-team.

McParland gives most of the credit for this advancement to Rafael Benitez and points to the progression of the likes of Jack Robinson, Jon Flanagan, Adam Morgan, Andre Wisdom, Suso and Sterling as proof that the next academy-reared first-team regular is not far away. Yet it is obvious that of the most recent crop Sterling is the most likely to make it, and so the longer he struggles to fully establish himself in the first-team the longer questions remain over Liverpool’s ability to produce their own stars.

The club clearly have faith in Sterling – the five-year contract he signed last December is proof of that – and given his tender age he should be allowed to develop and not be burdened with too much pressure. Yet having made such significant strides last season, the danger is that he will slowly but surely slip backwards unless both player and club are fully committed to avoiding such a scenario. In that regard, the failure to sign Mkhitaryan and the potential loss of Suarez need not be a total disaster. Instead, there is an opportunity for one of Liverpool’s most exciting players of recent times to prove he can fill the creative void. So far, so encouraging.