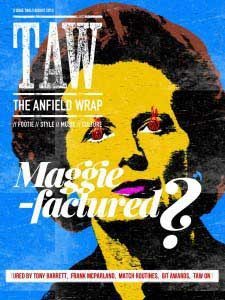 THE second Anfield Wrap magazine is now available to download via the App Store and through Newsstand for iPhone and iPad. There”s also a version available for other platforms, including Android and Windows, at app.theanfieldwrap.com.

Just like issue one, it”s absolutely FREE and features forthright fan views on football, music, culture and more related to Liverpool – the club, the city and the people.

And, just like the first edition, this is more than just a PDF floating around in cyberspace. This is an interactive, made to measure magazine featuring audio and video. Issue two includes:

As ever, we”d love to know what you think, so please rate and review the mag on the App Store and tweet us your views at @theanfieldwrap

Available now in Newsstand and iTunes >>

WEB APP for Android, Windows and other platforms >>