GIG OF THE WEEK: STAND AGAINST MODERN FOOTBALL

NOT really a gig, more of an event. But the feature is called gig of the week, so we’ll keep it like that.

This Saturday Stand AMF Fanzine and our friends at Boss Mag are putting on a show focussed round a panel based discussion answering the question “What can we, as football supporters, do next to take back our game?”

It is certainly a pertinent question at the moment, with more money than ever coming into the game through TV deals and sponsorship, yet many sections of a football teams traditional supporter base finding themselves priced out of football grounds, or unable to afford to take their children. There is also the question of whether football fans should have a greater say in the running of their football clubs, and whether (part or full)  fan ownership is achievable in this country.

The speakers tasked with answering the panel are:

That is a group of people capable of making you march to your football club and demand the keys for the people. But hang on until Sunday, because after the panel there is music from Anfield Wrap favourites Mercury 13, and then DJ sets from Bez from the Happy Mondays and Happy Mondays tour DJ Vince Vega. Then, 8 hours of drinking later, at 11pm, everyone leaves and goes somewhere else! God help that bar!

Tickets are £10 and are available from http://www.distantecho.co.uk/products/boss-night-and-stand-amf-fanzine-present-stand-against-modern-football

More? Well as you should know The Tea Street Band play The Zanzibar on Friday, and have roped in Sugarmen, Mark Frith (The Troubadours) and Sankofa to play with them.  The Teas are currently feeling very bullish after hearing mixes of their new album, and are sure to put on another memorable, hot and sweaty show at the venue of their very first gig. All three support acts have played The Social and you shouldn’t need me to tell you how brilliant they are. Tickets are just £5 and there are apparently a few left, although I am told there are some being held back for sale on the door as well.

And whilst I am on the subject of The Social it would be remiss of me not to mention our first birthday this Thursday. Music comes from Married to the Sea and Silent Sleep (acoustic) and is free as always. Its going to be a great night. 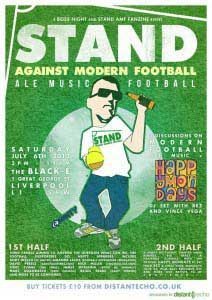