SCHADENFREUDE. Just in case it’s a word you’re not familiar with, it’s German. And it means ‘the pleasure derived from the misfortune of others’ or ‘malicious joy’. 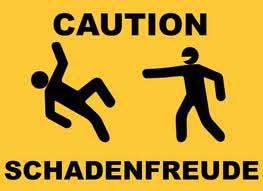 Well that’s the official version. The Urban Dictionary – urbandictionary.com – offers up some more base definitions: “Watching a vegetarian being told she just ate chicken. Straight-A students getting Bs. Exes getting STDs.”

Anyway, you get the picture.

Now somewhere sometime, shit got serious when it comes to football. Instead of footie stickers, league ladders and dreaming of buying fancy foreign stars, it all turned leveraged buy outs, Financial Fair Play and the minutiae of tactical approaches.

Now don’t get me wrong, I enjoy some of the detailed analysis of the game and I’m all for fans empowering themselves with financial and football governance knowledge as part of an attempt to take the game back to its roots.

But all that shouldn’t be at the expense of that childhood pantomime hatred of your rivals and this is the thing – loads of footie fans have gotten all ‘moral’ in their old age. I’ve probably been guilty of it myself at times, but fuck’s sake, it’s meant to be a laugh all this. Treat it as that.

When Alex Ferguson announced his retirement – and I’d finished punching the air – I reached for my keyboard and, without thought, grinning, I tweeted: “As a Liverpool fan, I’d like to say with the deepest sincerity that I hope it all turns to shit at Old Trafford now Taggart is going.”

I meant it. Watching them winning everything has pissed me off no end, especially as I’ve had the misfortune to work in Manchester for a good proportion of my working life. I’m good mates with some Mancs (shock fucking horror) but it doesn’t mean I want anything but the worst for their footie team.

It was exactly the same for them when we were winning everything in sight. They hated us, despised us – couldn’t stand the sight of Kenny Dalglish, Ian Rush and the rest.

All that – as well as the close proximity, the economic history, the clothes and the music – is why there is such a strong rivalry between the city and the clubs (well, except if you’re a Blue obviously – they love a bit of the Mancs don’t they?).

I was delighted Ferguson was calling time on his managerial career – I still am. To these eyes, the bitter old Sweaty Sock has been the difference for them many many times – from his baiting and bullying of referees and the FA, to his (and I say this through gritted teeth) indefatigable will to win.

Now, not only has he quit, he’s been succeeded by David Moyes, a middling manager who’s never finished higher than fourth. It’s a move that in all likelihood has weakened both Man United and Everton in one fell swoop. What’s not to love?

But ooh no, we must be gracious. We must not mock. We can’t be perceived as ‘bitter’. And we’re crap so how can we have a pop?

Who decided these rules?

Sorry, but bollocks. Footie’s not always about logic and objectivity. It’s about deep-set uncontrollable passion and the schadenfreude of watching rivals (in a sporting sense – not all that mocking human tragedy shite) suffer is very much part of that.

One of the first tweets I got back was from a staunch home and away Man United fan who writes and distributes one of their fanzines, United We Stand.

“Arsed…” was all it said. He was though. Like when we were lumbered with Hodgson, the United fans will no doubt back Moyes at the match but there are plenty unconvinced by the appointment.

Replying to my tweet “praying for Moyes”, this United fan added: “Fuck me I’ll bet you are. He’s behind Warnock on my wish list. And Warnock’s behind Stuart Hall…”

Others though, Liverpool fans, clambered for the virtuous path. One tweeted: “Being bitter just plays into their hands. I’d just respect the achievements, and the legacy and move on and hope LFC improve!”

Respect their achievements? Oh aye – I’ll roll out the red carpet for “Sir Alex” as well should I? Maybe present him with a special award on behalf of Liverpool fans? Seriously, what the fuck?

Mancs, like you need reminding, sing about us EVERY game. Ferguson once lifted a title and the first word out of his mouth was “Liverpool”. Then there’s the infamous “perch” crap. Anyone that thinks this doesn’t work both ways is living in a parallel universe.

The same fan added: “Not what I would expect from a journalist! SAF made Man U. Beating them won’t be as sweet now.” That elevated the lad to crank status to be fair. “SAF”? Beating them won’t be sweet? I despair. If this represents any decent portion of football fans these days then stop the world – I’m getting off.

And while I’m on, I hate the “not what I would expect from a journalist” shout. EVERY person that writes regularly about football supports a team. Some are up front about it, others prefer to keep it quiet. Equally, some do a better job than others at remaining objective when they’re doing the day job.

Most, in normal life, when they’re on the ale, with their mates will say the same things about teams they don’t like as everyone else does.

But back to the schadenfreude. Moyes was good for Everton, I suppose. He had them punching above their weight, finishing above where they should have given the size of the wage bill and so on.

But with his awful derby record and his aversion to silverware, he was pretty good for us, too. And it was all kinds of wrong to see the fella who’d left them up shit creek being given a guard of honour for getting off to a club that once upon a time was a rival for them. How the mighty has fallen.

As for the Mancs, well hilariously they’ve started selling the idea of Moyes to each other. “He might not be that bad you know?”. “It was who Alex wanted.” etc etc

Just for shits and giggles, let’s have a mooch at David Moyes’ away Premier League record v Man United, Liverpool, Chelsea and Arsenal while in charge of Everton: P45 W0 D18 L27.

Good eh? Throw in his propensity to shit his pants – and wear Alan Partridge outfits – on the big occasions and the fact the only trophy to his name is the Football League Second Division in 2000 and there’s plenty to give us hope that he’ll start tailspinning once he grabs the controls at Old Trafford.

Moyes is used to setting up sides to first and foremost avoid defeat – he did again at Anfield despite bringing over an Everton side that notched up its highest-ever Premier League points total.

That won’t be good enough at United. And hopefully neither will he.

Of course it’s not quite as funny if we’re shite… But that’s details, mere details. Now where’s that new Everton badge, I could do with a laugh…