How will history judge Andy Carroll?

£35m. 58 appearances. 11 goals.
THEY are the miserable figures that will no doubt dominate conjecture on Andy Carroll’s torturous Liverpool career. But they shouldn’t, because to understand Carroll’s stay on Merseyside requires more than just a glance at the vital statistics. To some the figures damage Carroll’s reputation, especially given his rapid rise up the Premier League scoring charts and into the England setup in 2010. But instead they are more revealing of the mess that was Liverpool Football Club in that time, than Andy Carroll the footballer.

Remember the 31st January, 2011? A seismic day in the recent history of Liverpool Football Club. A day that saw Fernando Torres vacate the hallowed number 9 shirt, to be replaced by Newcastle United striker Andy Carroll.

At the time it was barely believable, barely credible. But it did happen. The loss of El Niño was shattering in such dramatic circumstances, and caused the brief upward turn in his form following the arrival of Dalglish to be airbrushed from subsequent discourse. Indeed the sum of £50m, alongside 15 goals in 82 league appearances for Chelsea, has softened that blow quite considerably.

But of course, Chelsea and Roman Abramovich were prepared to pay that eye-watering figure because of who Fernando Torres the footballer had been between 2007 and 2010; 58 goals in those three injury-hampered seasons – all from open-play remember – were fresh in the memory. His sluggishness for Liverpool that season was put down to Roy Hodgson and his own antipathy.

But enough of him. The point is, Chelsea had good reason at the beginning of 2011 to be spending big bucks on a prolific goalscorer who seemingly needed just a change of environment to rediscover his touch. Liverpool, Damien Comolli, FSG and, sadly, Kenny Dalglish too, were grossly negligent in investing £35m of that money for someone, who, at the time, had registered just 14 goals in the top-flight.

Andy Carroll was doomed from the start; he could not be Fernando Torres Mk II.

It’s one thing to be the direct replacement for one of the most iconic strikers in the recent history of Liverpool Football Club, but to smash a British transfer record in the process, all while being injured, had a profound effect on his time at Anfield.

Dalglish made a point of repeating the assertion that the Geordie was ‘here for five years, not five weeks’. But even when Carroll returned to full fitness after a stop-start end to the 2010-11 season, it never felt entirely like that. The treatment of Carroll was decidedly counter-intuitive and contradictory. 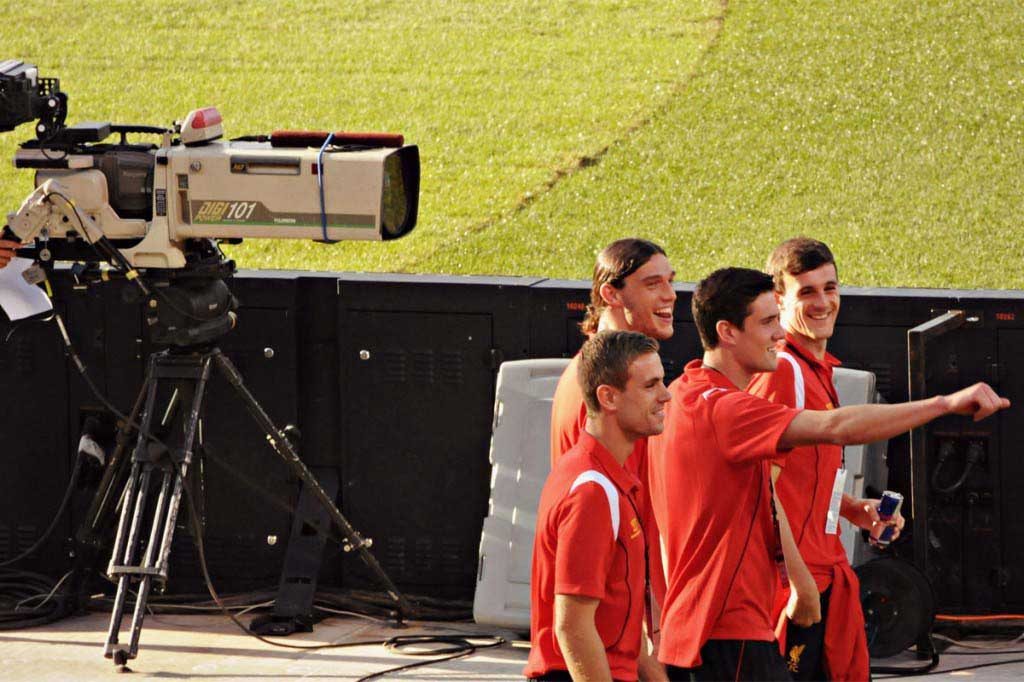 Carroll with teammates on pre-season tour before loan move to West Ham (Pic: md.faisalzaman, on Flickr)

Rightly or wrongly, and most camps of consensus lean towards the latter, the formula of building around Luis Suarez, stumbled upon in the spring of 2011, was abandoned in favour of the £35m recruit. The summer acquisitions of Stewart Downing, Jordan Henderson and Charlie Adam, even Jose Enrique to a certain extent, were aimed at bringing the best out of the 6ft 3in Carroll; for a total fee in excess of £40m.

Yet the striker was chronically misused by Dalglish throughout the 2011-12 season. He never started three games in a row, and given that Suarez missed nine matches at the start of 2012 that is pretty unforgivable. He was never allowed to find a rhythm, or time to breathe in the first team, and so it is little surprise that he failed to hit the ground running.

It’s quite simply poor management. Equally confusing was a seeming reticence to pair Carroll with Downing, when you’d assume the pair were a natural fit.

A 0-0 draw with Stoke in January 2012 is a case in point, when, with Liverpool playing three centre-backs, Dalglish introduced Carroll with half-an-hour to go, only to haul off Downing in exchange. It happened at a similar juncture at Old Trafford, St. James’ Park and at home to Arsenal and Aston Villa; none of which Liverpool won.

In the grand scheme of things it may not amount to much, but it does at least point to befuddled management of which only Dalglish is culpable.

Yet Carroll was also culpable of drawing the ire unto himself – who can forget that atrocious dive at Newcastle? He also suffered for appearing lead-footed, entirely graceless on the ball and possessing a remarkable propensity for falling over. And that’s not even to mention the ponytail. Too often he was lumbering and ponderous; someone to beat a stick at as Liverpool registered their lowest league points tally since 1954.

But Carroll’s output flourished as the 2011-12 season drew to a close. To many the £35m price-tag was somewhat justified by his late winner against Everton in the FA Cup semi-final; it afforded him something akin to a cult status.

It was quite a spring flourish, allied with his thumping winner at Blackburn a couple of days before and that barnstorming second-half cameo in the final against Chelsea which came so close to repairing the damage of an insipid first hour.

After an encouraging end-to-the-season and a decent showing at Euro 2012, which included another thumping headed goal, hopes were high. Carroll had developed an affinity with the supporters, who applauded and appreciated his hard graft.

But his bulking frame did not fit the Brendan Rodgers blueprint. Given Dalglish’s misuse of the striker, it would be unfair to blame a change in managership for his estrangement, but his improved performances at the back-end of the previous season had put him back in the reckoning, and with the chance to kick-on afresh.

His swift exile under Rodgers was a disappointment; but to have gleaned £15m after his rather modest year at West Ham is extremely refreshing. The club now, in June 2013, has an entirely more coherent transfer policy than it did 29 months ago.

The Andy Carroll Experience was a brutal, yet perhaps necessary experience for FSG. It set the club back two-and-a-half years, to where it finds itself now; no nearer the Champions League, but at least with a clear policy and structure in the transfer market. Carroll may have arrived as a £35m signing; but given the debacle of summer 2011, his true cost was nearer £70m.

Ultimately, no matter Dalglish’s frequent protestations, Liverpool could not afford to wait five years for him to mature as a person and grow into that £35m price tag. Strikers of his stature – bulky, 6 foot +, reliant on their muscular frame more than speed or agility – tend to take time to adjust to their body. Fernando Llorente didn’t become prolific at Athletic Bilbao until he was 24/25, whilst Didier Drogba and Zlatan Ibrahimovic, widely considered as the masters of this profile, only became so in the mid-to-late parts of their career.

At West Ham, and under Sam Allardyce’s own particular football vision, he will have that opportunity to grow. His attributes are entirely suitable for a team with limited ambitions, but perhaps not one with rather loftier aims; he is not a flat-track bully and still lacks the killer instinct of his peers.

Andy Carroll is now 24; the next five years of his development are career-defining and will shape him as a footballer, not his abortive two-and-a-half year fiasco on Merseyside.