IT was a little after 2.30pm and Peter Hooton, The Farm’s frontman and Spirit of Shankly frontrunner, decided now was the time to blare ‘Fight The Power’ out of his handheld CD player. The mood was certainly heated as the few hundred people who had marched from Regent’s Park under a blazing sun gathered in front of their destination – the Premier League and Football League’s offices in nearby Gloucester Place. The chants for those inside to face the people grew louder and then came a sit-down protest, right in the middle of the road. Traffic arriving from the right was going nowhere.

The sit-down only lasted for a few minutes and, ultimately, there was no face-to-face encounter with the likes of Richard Scudamore, the chief executive of the Premier League, who earlier in the day had met with representatives of the Football Supporters Federation and other fans’ groups behind closed doors to hear their grievances over escalating ticket prices. But nevertheless, what had just taken place felt significant, like the start of something. Or, indeed, as Hooton put it, “historic”.

“What you see here are hardcore football fans from different clubs, many of them rival clubs, coming together for the first time to show that what’s happening in the game isn’t right. It’s a watershed moment,” he said. “Symbolically this is about telling the Premier League that they can’t keep treating people the way they are and that there is a general consensus among supporters – we’re getting charged too much. The Premier League say it’s not their fault – it’s down to the clubs, and the clubs say it’s nothing to do with them – it’s down to the Premier League. It’s pillar to post all the time and, quite frankly, we’re sick of it.” 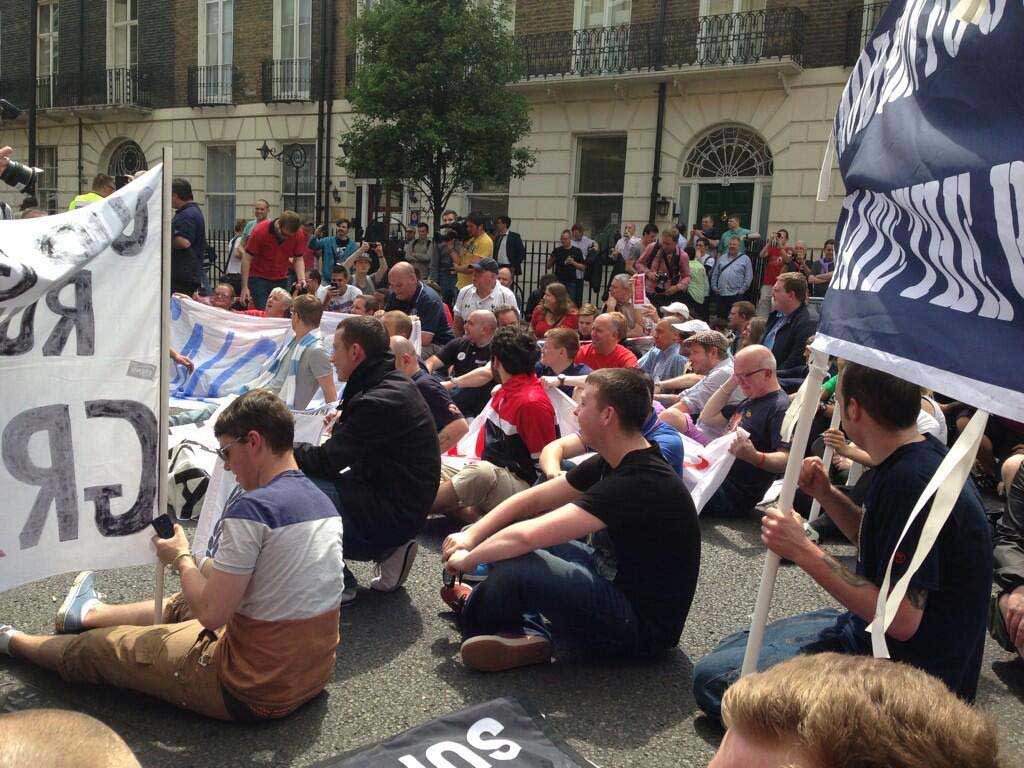 That much was evident from the outset of the march, which had been organised by SOS but as was clear by the shirts worn by those gathered at Regent’s Park had attracted not just Liverpool fans but also those of Manchester United, Manchester City, Arsenal, Tottenham, Everton, Sunderland, West Ham, Leicester, Crewe, Hull and Watford. This was, as Hooted pointed out, a gathering of rivals and clearly a clause felt beyond the parameters of the Premier League.

“High ticket prices effects everyone,” said Dave Tomlinson, FSF council representative for the North West and North Wales and a lifelong Crewe supporter. “In towns like Crewe, which has been hit massively financially because a lot of jobs have gone at the railway works and the local motorcar works, even £20-£25 [for a ticket] is too much. And even if the guy can afford the £20-£25, he then can’t afford to take his children to the game. 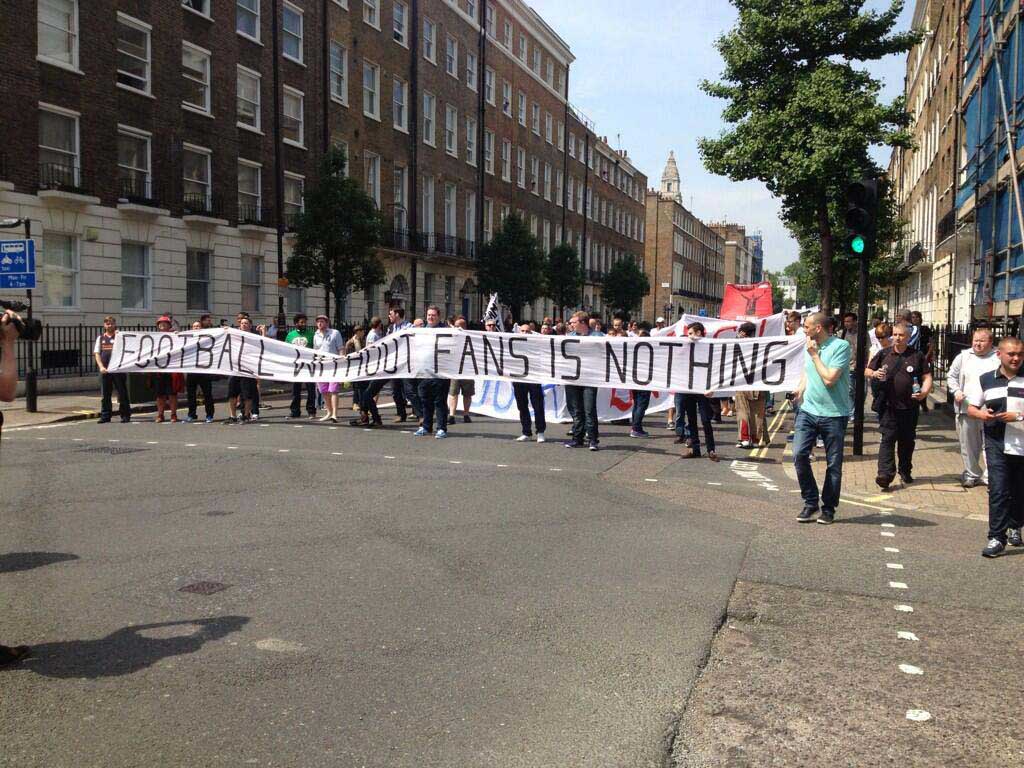 A simple yet powerful message for the football authorities: “Football without fans is nothing” (Pic: Spirit of Shankly)

“If just one person cannot afford to watch their team play then we have a problem, so what we have to do is work towards every club reducing their prices in some way and go from there, even look perhaps at reducing the cost of transport to grounds. As any supporter will tell you, the expense of going to a game begins as soon as they leave their front door and doesn’t end until they’re back some hours later, and sadly it’s getting higher and higher every year.”

Nowhere is the pinch felt greater than in the Premier League, where despite the influx of enormous revenues those who fill the grounds continue to feel no subsequent, material, benefit.  Quite the opposite, in fact, if anecdotal evidence, fuelled by the jaw-dropping prices many supporters have to pay to watch their teams play, is anything to go by. In this regard, a seminal moment appeared to take place in January when Manchester City returned 912 tickets, or almost a third of their 3,000 allocation, for the visit to Arsenal in response to the £62 price the London club was charging away fans to attend the game. “£62!! Where will it stop?” read the banner held aloft by Richard Taylor, one of the City fans who did travel to the Emirates, and suddenly, in a fixture televised to millions across the globe, we had an image that reflected the disconnect between the glitz of top-flight English football and the glumness felt by those who increasingly feel they are being forced away from watching it.

“The problem is that years ago a club’s main income came through the gates but now it comes through TV and commercial deals so they feel they don’t need the loyal, hardcore fans anymore and can treat them however they like,” said Suzi Mason, an Arsenal supporter since the late-1960s and an attendee of Wednesday’s march. “Part of it is based on class. I’m old enough to remember [Margaret] Thatcher coming into power and the definite hatred of the working class that began to emerge in this country soon after. Her and her government hated football fans in particular and that is why the cover-up of Hillsborough happened. She may not have been directly involved but there is no way such a scandal would’ve happened had Thatcher not been in power.

“She’s gone but that mindset still exists among those at the top and those who run football – blame the fans and treat them however you like. That is why protests like this are so important, they show that we’re not willing to take it anymore.”

But the problem, to some extent, is that fans are prepared to take more. Like Mason, Matt Boyayanlar is a lifelong Arsenal fan disgruntled with having to pay expensive prices to see his team play, or specifically, the most expensive prices, with an Emirates season-ticket currently costing £985, more than at another Premier League venue. Asked, however, if he had a breaking point, a price at which he would refuse to watch Arsenal play in the flesh any longer, the 40-year-old gave an answer which will have Ivan Gazidis, the club’s chief executive, rubbing his hands with glee.

“No,” Boyayanlar said. “It’s my club and I’ll always follow them, even if that means cutting down on other things, which I’m having to do already. But I have friends who no longer go to games because they can’t afford to do so and I would definitely take part in a boycott of a match if one could be organised.”

The FSF, which represents over 220,000 supporters across England and Wales, has always described boycotts as a “nuclear option”, partly because the bulk of supporters simply cannot stomach the idea of turning their backs on their team, and partly because of the impracticality of such a measure. Instead, the organisation has since late January been pushing it’s ‘Twenty’s Plenty’ campaign, which aims to put a maximum price of £20 on away tickets across all 92 league clubs. So far 9,000 people have signed the relevant petition, which has led to an acknowledgement of the depth of anger towards ticket prices from figures at the Premier League, Football League and Football Association but, as the FSF concede, little sense so far that any positive action will be taken from the relevant authorities.

That is why Wednesday’s event was deemed crucial by activists, acting as it did as a reminder that fans unhappy with current ticket prices have no intention to simply fade away. The march was organised to coincide with the release of the fixtures for the 2013-2014 Premier League season, a moment which regularly infuses match-goers across the country with fresh optimism and joy and allows the likes of Scudamore to revel yet again in the appeal of their “product.”

It is a product which from the start of the coming season will generate £3.22bn over three years in a fresh television contract, an increase of £1.27bn on the TV deal for 2010-13. To put that increase into context, it is large enough to allow the 20 Premier League clubs to collectively reduce the price of every ticket for every game over the next three seasons by £32.09 and suffer no loss in TV income.  And were the clubs to claim that they need the extra income to survive and/or grow, this gobsmacking fact should be thrown back in their face: according to Deloitte’s figures for the 2011/12 Premier League season, almost 75% of the top-flight’s £3bn collective revenue was spent on wages. Quite simply, the players are getting richer while the fans are getting poorer.

So, by the ducks that paddled through Regent’s Park on a glorious summer’s afternoon, supporters from every corner of the country gathered by banners that read: “Against modern football”, “If you tolerate this your children will be next”, “Working class game, business class prices” and “Spirit of Shankly still shines.”

It was the contingent from Merseyside who, at 2.10pm, led the protestors through London, yet again taking a frontline role in the protest against prices. Everywhere Liverpool went last season there was the sight of the “Football without fans is nothing” banner and here it was again, holding up traffic at the junction of Gloucester Place and Montagu Place, leaving open-top bus tourists, passers-by and labourers alike looking on in amazement. 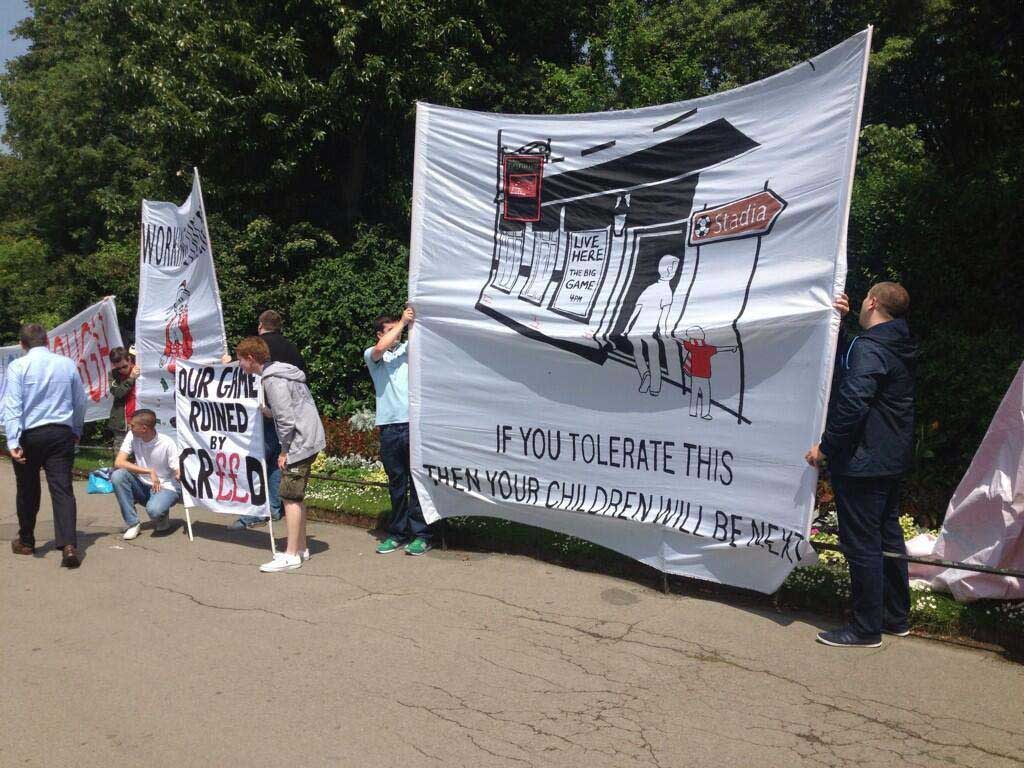 Banners at the march: “If you tolerate this…”, “Ruined by greed…” (Pic: Spirit of Shankly)

The searing heat did nothing to quell the sense of mission coursing through those marching on the pavements and on the road, with their chants of “we’ve got the worst league in the world”, “you greedy bastards” and “supporters united will never be defeated” growing louder as they got closer to their destination.

There were also chants of “We hate Sky Sports” and “Saturday – three o’clock”, which pointed towards the protest’s lack of specific, targeted aims. As one protestor pointed out, there was a danger of those involved rallying too hard and too vaguely at modern football, coming across as “the 45-year-old bloke who sits in the pub and moans that there are no good bands anymore”. But as Hooton said after putting his CD player down, this march was more symbolic than specific, a first step rather than the endgame in the fight by fans to reclaim what is theirs.

“This march was organised with a meeting in Liverpool and a meeting in London, so just imagine what we can achieve with a properly planned mass campaign,” he said. “This is just the start, we’re not going away, and we’ll keep coming to these offices until the powers-that-be start listening. The Premier League keeps talking about market forces, but football is not about market forces. It’s about the soul of working-class communities, and while it’s great that the game has gone global there has to be more respect and recognition for the people who made it what it is. This is a show of strength and it’s only going to get stronger.”