OF POWELL AND PREJUDICE: THATCHER, HILLSBOROUGH AND THE DAILY MAIL

AMONG the avalanche of analysis, opinion and comment that has followed the death of Margaret Thatcher, one word has been omnipresent: divisive. 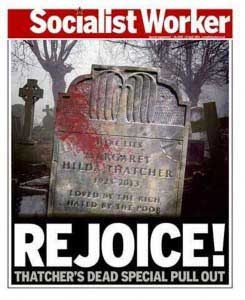 It’s been the phrase of choice for the mass media when describing the nation’s perception of the former prime minister, particularly the sections of it desperate to underline their political impartiality. Those veering to the left have been more scathing of Thatcher, those to the right more gushing, with extremes swinging from The Socialist Worker’s front page urging readers to ‘Rejoice!’ to the Daily Mail’s claim that Thatcher was ‘The Woman Who Saved Britain’.

The point is, wherever you turn, whatever your politics and wherever your birthplace, it is impossible to ignore that there are two sides of the story regarding Thatcher.

It’s a fact that has seemingly escaped the Daily Mail’s Jeff Powell. 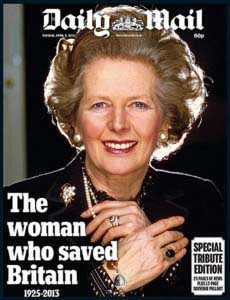 Sometimes ignoring a dissenting voice is the best policy. Why give it the oxygen of publicity, goes the maxim. And when much of the opinion and analysis offered up to the masses via the Internet is little more than link bait, it’s an approach that holds a lot of weight.

Sometimes though, a riposte is necessary, especially when a viewpoint is so obviously twisted to suit an agenda at the expense of reality, that it leaves any notion of fairness and accuracy as a mere dot on the horizon.

Ridiculously one-eyed coverage of politics, and in particular Thatcher’s politics, is to be expected from the Mail. But Powell has taken it on a step further this week, moving the Thatcher love-in from sycophantic pantomime comedy to revisionism with a sinister undertone.

First Powell – who has repeatedly detailed down the years (and did again this week) that he reported directly to Thatcher after Heysel in 1985 – criticised the lack of a minute’s silence at Old Trafford before Monday’s Manchester derby.

“Apparently the doffing of a few metaphorical cloth caps was too much to ask in memory of one of the most important political figures of our times,” he wrote.

No mention that Thatcher had a clear disdain for football and its supporters, or that the chances of a silence for her memory passing off without incident or interruption were about as likely as a Daily Mail Arthur Scargill tribute special.

No mention either, in detail at least, that Thatcher wanted to bring in a draconian football ID card system that Lord Chief Justice Taylor later described as “using a sledgehammer to crack a nut”. If she’d had her way, EVERY football fan would have been controlled by the state. And anyone entering a ground without a card would have been risking up to a month behind bars.

Instead, Powell detailed the problems with hooliganism during Thatcher’s reign and after touching on Heysel added: “It was a battle which would not be won until, by a terrible irony, the people of Liverpool became entrapped in an even greater disaster of their own, at Hillsborough four years later.”

Irony? Is that really an appropriate word to use in this circumstance? There is no disputing the culpability of some Liverpool fans in the death of 39 Italians at Heysel but the selection of a decrepit stadium allied to mismanagement of ticketing where, and remain, contributing factors.

The Bradford fire also highlighted the woeful inadequacy of football’s facilities and administration. Yet lessons were not learned and it was football supporters that Thatcher’s party and the police continued to target.

Read any football fanzine from the time of Thatcher’s reign and the same tales are repeated over and over regardless of team supported – dilapidated stadiums, police with a predilection for violence and terraces uncomfortably filled well beyond capacity. Fans knew the problems but no one listened. Football supporters, it seemed, were just another “enemy within”.

A further 96 deaths after Heysel and Bradford is not irony (not the first time Powell has used that phrase in relation to Hillsborough). For clarity, the Oxford Dictionary defines irony as: “the expression of one’s meaning by using language that normally signifies the opposite, typically for humorous or emphatic effect.”

However you frame it, comparing Heysel to Hillsborough and including the word ‘irony’ appears distasteful in the extreme.

A second piece from Powell this week followed two days after the first, headlined: “Why it’s wrong to blame Baroness Thatcher for shameful cover-up which followed Hillsborough tragedy.”

Referencing Conservative Party donor and chairman of Reading John Madejski’s comments this week about a minute’s silence for Thatcher, Powell mused: “He speaks for the rational majority at this historic but complex moment in Britain’s history.”

Did he carry out a poll to reach that conclusion? Or, just as it felt to many under Thatcher’s leadership, are football fans and working class communities simply written off as irrational or irrelevant? Do the views of those not canonising Thatcher not count? How about the families, the campaigners and the journalists who for 23 years tried to tell Britain of the cover up and black propaganda campaign regarding Hillsborough but hit wall after wall while people like Bernard Ingham, Thatcher’s Chief Press Secretary, propagated the myth of the ‘tanked up mob’?

Powell clears it up: “The various attempts to blame Hillsborough on Thatcher are an unwarranted extension of the class warfare which erupted during her time in office.”

The Hillsborough Independent Panel’s report did not leave Thatcher holding a smoking gun as many had hoped but it did offer a glimpse into a mindset that allowed an incompetent and culpable police force to remain untouchable for so long. A handwritten note showed that Thatcher believed the Taylor Report was too critical of police.

The families are continuing to push for the disclosure of documents relating to the briefing given to Thatcher when she visited Hillsborough the day after the disaster. What was said then remains a mystery. What is known is that the cover up began in earnest soon after.

Given Thatcher’s feelings towards football fans during her political career, given Ingham’s comments down the years and refusal to this day to apologise, given the recommendation of her ministers to leave Liverpool to a “managed decline” and given that Thatcher knew the Taylor Report attached “little or no blame” to Liverpool fans, why exactly is it that Thatcher should not be afforded blame for what David Cameron called the “double injustice” of Hillsborough?

Powell goes on: “The Liverpool families should continue to direct their anger at the South Yorkshire Police. Not at the lady who, as I explained in these pages earlier this week, saved football from its turmoil of the 1980s and paved the way towards the all-seat magnificence of the game as it is today.”

Opinions like that leave Powell’s words carrying little credibility. Yet for detractors of the justice campaign – and despite everything there remain some – they are manna from heaven.

Powell is happy to blow both his own trumpet and that of Thatcher when it comes to the safety of football supporters. In September 2012, writing about Hillsborough, he wrote: “Thereafter Mrs Thatcher, her subsequent Sports Minister Colin (now Lord) Moynihan and I were in the forefront of the campaign to tear down the iron fences, close the standing terraces and bring all-seat grounds into law.”

Yet, four years earlier, and despite being present at Hillsborough, he wrote a piece advocating the RETURN of fences. It began: “It needs to be said here, now and before it’s too late. Before we are all walking heads down in grief, hands wringing in guilt. Walking behind the coffin of the first footballer or referee killed out there on the pitch by a solitary lunatic or a stampede of louts. Bring back the fences.”

Worse, it ended: “As a survivor of Heysel and Hillsborough, it seems it must fall to me sound the alarm. The hooligans are still here. Bring back the fences.”

To most, a survivor of those dark days would not be someone languishing in the comfort of a press box. And again, Heysel, Hillsborough and hooligans are words disturbingly close together in Powell’s prose.

With prejudices like that seemingly lurking perilously close to the surface in his psyche, perhaps it is no wonder Powell was sought out by Thatcher. He no doubt told her exactly what she wanted to hear about football fans.

This though, isn’t the 1980s. The Hillsborough families fought back and the truth is now out there for all to see. Now it’s simply a case of wondering what’s worse – that Powell still feels the need to rewrite history, or that he’s given the platform of a national newspaper to do so.