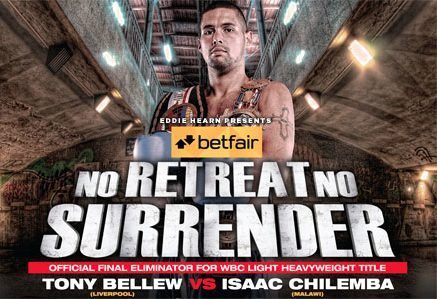 The fight is the last step to a second World title shot for ‘Bomber’ Bellew, who moved through the gears in 2012 with a devastating KO over Danny McIntosh in a British title defence in April, a ninth round stoppage win over Edison Miranda in September and dug deep through a terrible cut against Roberto Bolonti in November to reach this pivotal point in his career.

Malawian Chilemba is ranked at number five in the WBC and also defeated Miranda in 2012, one of the 25 year olds’ 20 wins in his 22 fight career – as tough a test as Bellew could face as he stands on the cusp of World title glory.

“It’s a massive night and a really tough opponent for the right to fight for the big one,” said Bellew. “Isaac is a top class opponent; he beat Miranda at late notice and has only one defeat on his record from five years ago, so he’ll be well up for this and he’s in good form.

“But I’m on the edge of a World title fight and I’ve worked too hard to give it away now. It’s a great card on show for the Liverpool fans and I am sure they will turn out in force on March 30.”

A rematch of the domestic fight of the year for 2012 between Derry Mathews and Anthony Crolla for the Commonwealth lightweight title provides the chief support to Bellew’s crunch clash with Chilemba, with Liverpool’s Rocky Fielding defending his English super middleweight title against Wayne Reed, unbeaten lightweight Scotty Cardle in action in his ninth pro contest, Callum Smith boxes in his hometown for the first time and GB London Olympic captain Tom Stalker will appear after he announced he will turn pro with Matchroom Sport.

And you can win one of  five pairs of RINGSIDE seats to the bout via The Anfield Wrap in association with Betfair.

So, for instance, a valid entry would look like this: 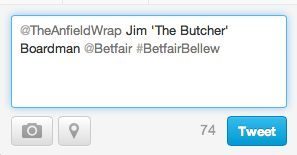 We’ll be giving one pair of tickets away every day for the next five days with the winners being picked by Tony Bellew himself!